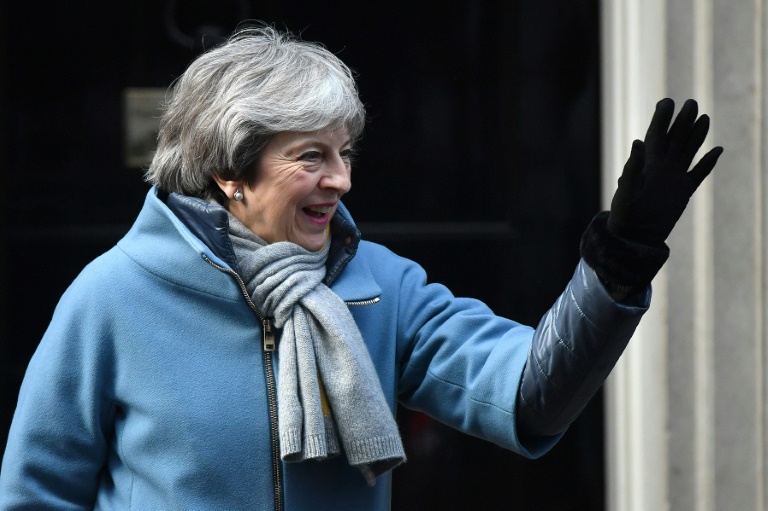 With less than two weeks to go to Brexit on March 29, Britain's Prime Minister Theresa May was struggling to turn the trickle of Brexiteers backing her deal into a flood (Photo: AFP)

Britain's government scrambled Monday to convince Brexit hardliners to give in at last and back Prime Minister Theresa May's EU divorce deal, though several opponents were refusing to blink.

With less than two weeks to go until a potentially chaotic departure on March 29 that could trigger an economic shock, May was struggling to turn the trickle of Brexiteers coming onside into a flood.

If they can back a deal by Wednesday, then May will head to the EU summit in Brussels on Thursday and Friday and seek a short technical delay to Brexit until June 30.

If MPs cannot rally round a deal, she will seek a long delay beyond that date.

May will not bring the deal back before parliament if she is sure to lose.

"Before any further vote were to take place we would want to believe that we had a reasonable prospect of being successful," her spokesman said.

May wants to be able "to win a vote this week and then only have to ask for that short, technical extension".

Foreign Secretary Jeremy Hunt, citing strong critics of the deal who were now backing it, said there were "cautious signs of encouragement" but admitted there was a "huge amount of work to do" to win over hardcore Brexiteers.

All eyes are on Northern Ireland's small Democratic Unionist Party (DUP), which May's Conservatives rely upon for a slender majority in parliament, and the European Research Group (ERG) of Conservative Brexiteers, both of which have so far rejected the deal.

"The prime minister held discussions with a number of her colleagues over the weekend. Talks have been taking place with the DUP. Those talks are continuing," her spokesman said.

European foreign ministers meeting in Brussels for pre-summit talks on Monday were broadly supportive of granting a delay but questioned its purpose.

"We are not against an extension in Belgium but the problem is to do what?" Belgian Foreign Minister Didier Reynders told reporters.

Former British foreign secretary Boris Johnson, who spearheaded the Leave campaign in the 2016 referendum on Britain's membership of the European Union, said he still would not back the deal without changes.

Instead he urged May to use the EU summit to wring more concessions out of the bloc before risking a third vote.

Johnson summarised the dilemma as being between a deal that is "detrimental to the interests of this country" and the "real risk that Brexit would not happen at all".

"There is an EU summit this week. It is not too late to get real change," he wrote in The Daily Telegraph newspaper.

"It would be absurd to hold the vote before that has even been attempted," he wrote.

In a blow to May, 23 Leave-backing Conservatives wrote a joint letter to the broadsheet calling for a no-deal exit.

"It is not our fault that we are confronted by two unacceptable choices," between a soft or an indefinitely delayed Brexit, they wrote.

Brussels could handle a British request to delay Brexit received at any time right up to the final hour before the deadline, an official said.

"I would say one hour before midnight Brussels time," a senior EU official told reporters.

The hour of 11:00 pm in London on March 29, or midnight in Brussels, is when, according to current British and EU law, the UK's four-decade old membership comes to an end.