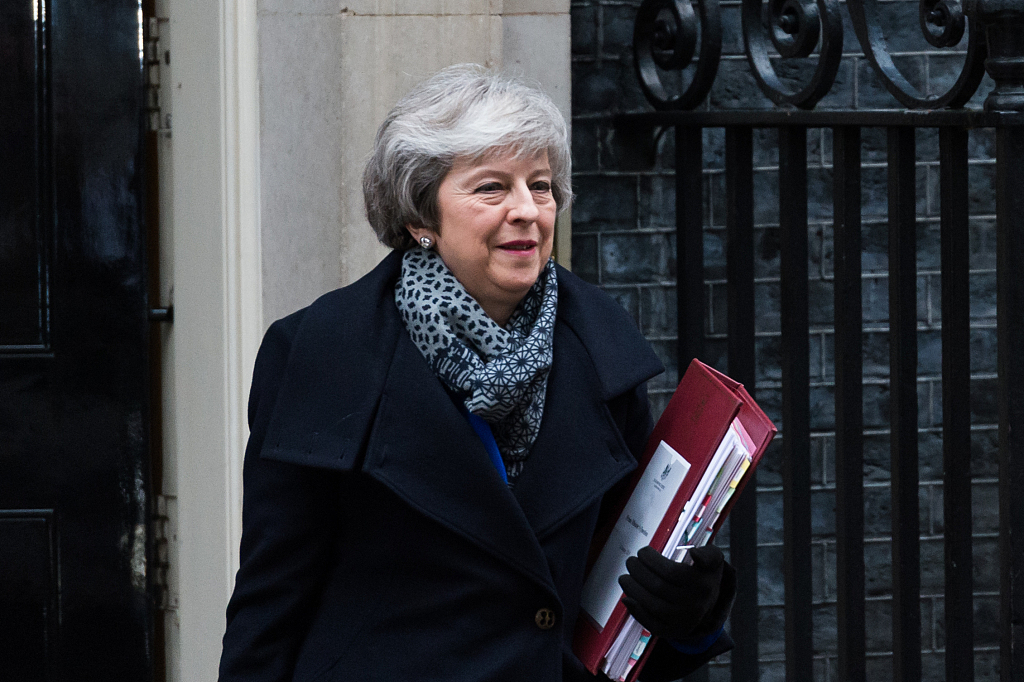 British Prime Minister Theresa May was expected to win a confidence vote on Wednesday despite a crushing defeat over her Brexit deal with the EU that triggered warnings of a chaotic "no-deal" divorce.

MPs on Tuesday rejected May's deal on leaving the European Union, leaving the Brexit process in total disarray with just 73 days to go before the official departure date.

She suffered the biggest government defeat in modern British history when the House of Commons rejected by 432 votes to 202 her agreement in a devastating blow to her entire Brexit strategy.

The result left Europe reeling, with various countries saying they would intensify preparations in case Britain crashes out of the EU on March 29 with no agreement.

At a heated session in parliament on Wednesday, May faced calls from MPs to give up the red lines she has imposed on Brexit negotiations and come up with a different plan.

She has said she will hold cross-party talks and announce the way forward on Monday.

But she insisted she was sticking to two key principles -- to limit migration from the EU and ensure Britain had its own trade policy.

These would seem to rule out membership of a customs union or the EU's single market, which the main opposition Labour party wants.

May appeared to hint at the possibility of delaying Brexit, saying the EU would allow this "if it was clear that there was a plan towards moving towards an agreed deal".

EU officials have said this could be possible but only until the newly-elected European Parliament meets in June.

However, her Downing Street office insisted the government intends to leave the EU on March 29.

"We still have time to negotiate but we're now waiting on what the prime minister proposes," German Chancellor Merkel said.

French President Emmanuel Macron suggested there may be room to "make improvements on one or two things."

Irish Prime Leo Varadkar said he would "continue to work with our European partners in a collective effort to conclude an agreement".

"We have always said that if the United Kingdom were to evolve from its red lines on the customs union and on the single market, that the European Union could evolve also," he said.

Anand Menon, professor of European politics at King's College London, told AFP that the EU "will be thinking hard about whether it's worth offering concessions given the number of MPs the prime minister has to win over".

The prime minister's own backbenchers rebelled in huge numbers over the divorce deal, but the ringleaders said they would still back her in the confidence vote scheduled for around 1900 GMT.

The motion was tabled by Labour leader Jeremy Corbyn, who wants to force a general election.

May's parliamentary allies in Northern Ireland's Democratic Unionist Party (DUP) have led the charge against her Brexit deal, but do not want a Labour government.

Ahead of the 2016 Brexit referendum, most lawmakers, including May, were against leaving the EU after almost half a century of membership.

Nearly three years later, the country is deeply divided and politicians are still struggling to form consensus around any plan, with MPs criticising May's deal both for keeping Britain too closely tied to the EU, and for not keeping it closer.

The defeat blows the starting whistle on a no-holds-barred struggle to direct the course of Brexit.

Increasing numbers of pro-European MPs are calling for a second referendum with an option to cancel Brexit.

On Wednesday, 71 Labour MPs signed up to a letter calling for a public vote. Scottish First Minister Nicola Sturgeon said it was the "only credible option".

"We don't have any more time to waste," she said.

On Wednesday, the pound mostly held its ground as investors considered the next likely developments in the saga.

Bank of England chief Mark Carney said he believed sterling's relative strength reflected "some expectation that the process of resolution would be extended and that the prospect of no deal may have been diminished".

"Financial stability must not be jeopardised in a game of high-stakes political poker," warned Catherine McGuinness, policy chair at the City of London Corporation, the body governing the British capital's massive financial district.