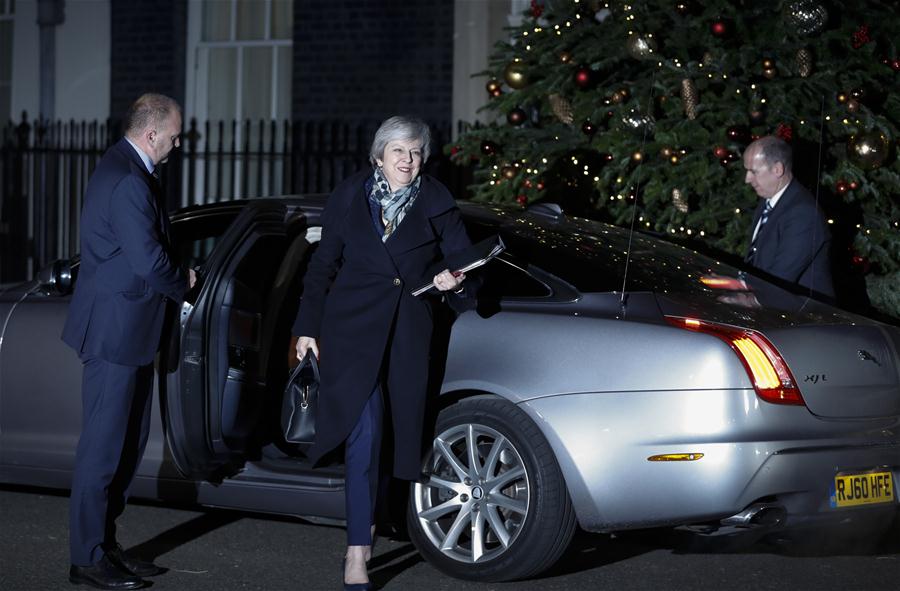 LONDON, Jan. 3 (Xinhua) -- British Prime Minister Theresa May greeted the new year by starting efforts on two fronts, at home and abroad, to breathe life into her much criticized Brexit deal by talking to unyielding European Union (EU) leaders and hostile members of parliament.

The prime minister returned to Downing Street on Thursday morning after spending her Christmas break phoning EU leaders in the hope of securing a "clarification" to the controversial backstop plan that has provoked a major rebellion by Tory members of parliament and her political allies from the Democratic Unionist Party.

May is facing a "meaningful vote" the parliament in mid-January on the fate of her withdrawal agreement as Brexit uncertainties drag into 2019, when the country will leave the large trading bloc.

With less than 100 days to go until March 29, the Brexit date, the British government and parliament are still far from reaching consensus on how the country will conduct the divorce.

May hoped to win concessions from EU leaders on plans for the backstop of Northern Ireland, the key sticking point in the Brexit issue, in the hope it will vote her deal through parliament this month.

The prime minister spoke to the German leader on Christmas Eve, and again on Wednesday, but there is slim chances of a breakthrough in time for next week's debate.

At home, the prime minister is inviting every Tory members of parliament to Downing Street for drinks parties on Monday and Wednesday in hope that she can win over those who still have doubts over her Brexit deal.

However, bad news already was reported Thursday from other side of the Channel on May's bid to get her Brexit deal over the line, at a time when the prime minister is yet to kick off her charm offensive next week by talking to Tory MPs.

Earlier on Thursday, the EU confirmed that "no further meetings are foreseen" with Britain in a blow to the prime minister's diplomatic efforts.

A spokeswoman for European Commission President Jean-Claude Juncker said at a press conference in Brussels that the leaders of the remaining 27 countries "have been very clear" that what is on the table "will not be renegotiated."

Downing Street on Wednesday night downplayed expectations that the prime minister had won EU concessions on her Brexit accord.

The British parliament was originally due to vote on May's deal on Dec. 11, but the prime minister delayed it at the last minute as it became clear it faced a near-certain defeat.

Since surviving a no confidence vote shortly before Christmas, May has been seeking reassurances from her EU counterparts to convince MPs to back her withdrawal agreement.

So far the sticking point has been that her deal would not allow Britain to unilaterally exit a temporary customs union arrangement with the EU designed as a temporary measure to avoid a hard border in Ireland.

British Brexit Secretary Stephen Barclay on Thursday talked up the risk of no-deal Brexit, saying it will be "far more likely" if MPs refuse to support May's deal, which is due to be voted on in the week beginning Jan. 14.

Without any doubt, Brexit will again dominate British politics in 2019, and the Brexit uncertainties will surely drag on.