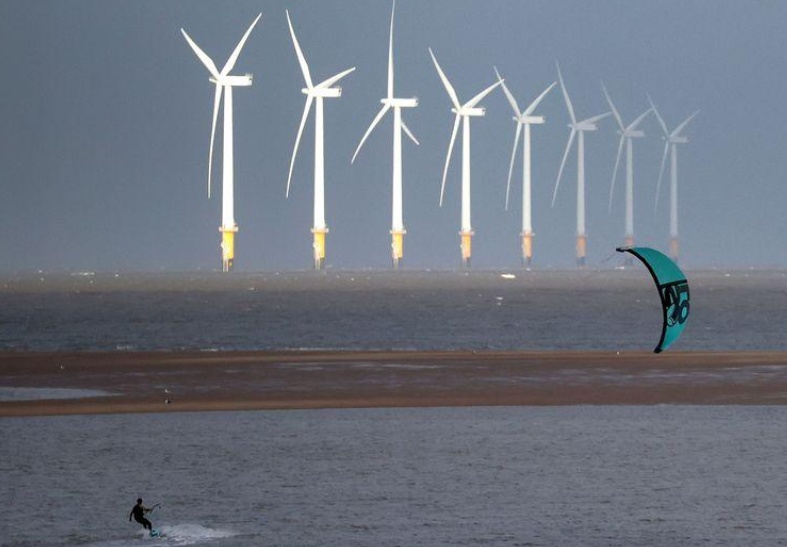 British Prime Minister Boris Johnson has vowed that offshore wind farms will power every home in the United Kingdom within a decade.

Investment would be made to "hundreds of thousands" of jobs in the clean energy sector and the government would use the novel coronavirus pandemic as a catalyst for green growth, he said.

"Mother Nature has savaged us with Covid, but with the help of basic natural phenomena we will build back better and greener," he said.

He added that the UK would "become the world leader in low-cost clean power generation – cheaper than coal and gas".

The program is part of a "green industrial revolution" that pushes the UK toward net zero emissions by 2050.

The government says it will raise its target for offshore wind power capacity by 2030 from 30 gigawatts to 40 gigawatts.

Coastal wind turbines will be built with more than 160 million pounds ($208 million) of investment being made available to upgrade ports and infrastructure in areas such as Teesside and Humber in Northern England, and Scotland and Wales.

Other plans in the clean energy drive include promoting use of hydrogen fuel, banning petrol and diesel cars, and developing new carbon capture and storage technology.

"We need to give people the chance to train for the new jobs that are being created every day – in new technologies and new ways of doing things," Johnson said.

Rapid advances in technology mean electricity produced by the wind now costs much less. Offshore wind capacity in the UK is already the largest in the world, creating 10 percent of its electricity demand.

Around 7,000 wind turbines are in operation across the UK countryside, with a further 1,832 located offshore, according to theswitch.co.uk.

The opposition Labour Party's shadow business secretary, Ed Miliband, said the wind energy targets fail to tackle the immediate jobs crisis. "The funding announced today spread over ten years is a drop in the ocean, and pales in comparison to the investment by France and Germany in green jobs," he said.

It comes as Scotland braces for a new stay-at-home lockdown within days amid mounting alarm at the surge in novel coronavirus cases.

Hospitals have been told to brace for a two-week  "circuit breaker" lockdown from Friday evening, according to the Sun newspaper, which cited reports from doctors.

Cities in England including Sheffield, Oxford and Nottingham, are also at risk of harsher restrictions as Johnson's government tries to control local flare-ups, according to The Daily Mail.

Pubs and restaurants in some locations may need to be shut altogether, said Neil Ferguson, epidemiology professor at Imperial College London.

Speaking on the BBC's Today radio program, Ferguson said that with schools and universities open it was important to find ways to reduce contacts in other areas, such as an "extended half-term" for schools or closing hospitality venues.

The Republic of Ireland will go into a "level three" lockdown, its leader, Taoiseach Micheal Martin, confirmed. Health advisors had recommended that the entire country be moved to "level five", the highest level of restrictions possible.

Martin confirmed that measures would be imposed nationwide on Wednesday, bringing the remainder of the country in line with the restrictions already in place in Dublin and Donegal.

Meanwhile, the UK government has launched an investigation into a data error that saw almost 16,000 novel coronavirus cases go unreported.

It meant that those who tested positive were told about their results, but their close contacts were not traced. The error occurred because some files exceeded their maximum size, the BBC reported. It meant 15,841 cases between Sept 25 and Oct 2 were left out of the UK daily case figures.

Health Secretary Matt Hancock told Parliament that just more than half of those cases missed were now having their contacts traced. He said the technical glitch "should never have happened". He added that it was a "serious issue that is being investigated fully".