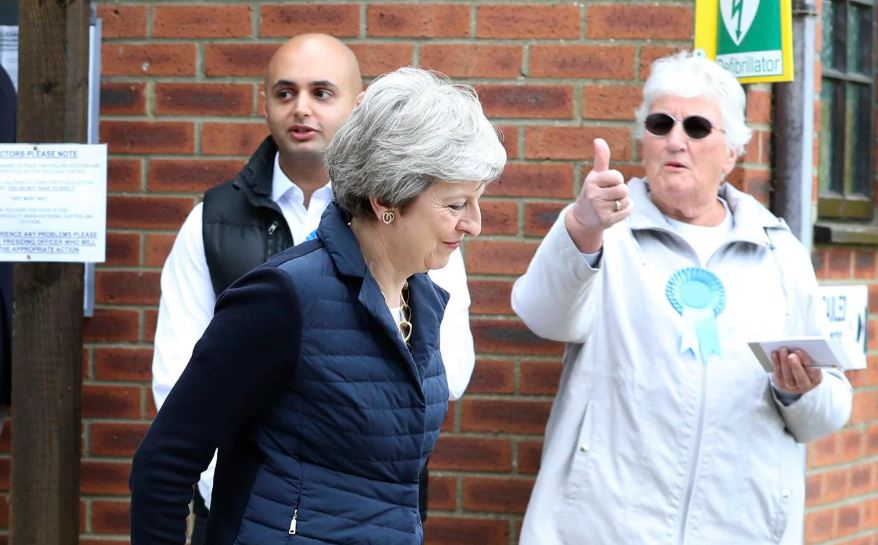 LONDON, May 3 (Xinhua) -- Thousands of voters in Britain punished the two main political parties on Friday over their failure to resolve the Brexit question by firing hundreds of councilors serving on city and town councils.

British Prime Minister Theresa May's Conservatives suffered the brunt of public anger, but the main opposition Labour Party also paid the price for the ongoing impasse over Britain's departure from the European Union.

With the counting of votes at the half-way stage by daybreak Friday, results showed the Conservatives had so far lost more than 400 seats in council chambers, and Labour around 90 seats.

The big winners of Thursday's poll have so far been Britain's third political party, the Liberal Democrats, who have won over 300 seats, mainly at the expense of the two big parties.

Conservative Party chairman Brandon Lewis admitted it had been a tough night for his party.

"We always knew this would be a tough year for us," Lewis said, adding that he recognized there is huge frustration about Brexit from the British public.

"There's a very clear message to both parties that we have got to get on with getting Brexit done," he said.

The Liberal Democrats spokesman and Westminster Member of Parliament (MP) Ed Davey described the results as fantastic and added, "We are back in business."

His party was punished in 2015 for its part in its coalition with the Conservative Party, when it suffered a near wipe-out at the ballot box.

Davey told Sky News many voters had turned to the Liberal Democrats over their Brexit policy and demanded a second referendum.

The Conservatives MP Crispin Blunt said the Brexit mess in Westminster had hit his party in the local elections.

He warned the outlook for the European Parliament elections, which are planned for later this month, could be even worse as the focus will be on Europe.

"Plainly we are going to need to get a new leader at some point and get a clear strategy to get Brexit across the line," Blunt said in a breakfast radio interview in reference to May's days at 10 Downing Street.

Andrew Gwynne, national campaign coordinator for the Labour Party, said it had been a tough set of elections for his party, and while local factors were at play, Brexit had undoubtedly played a part in the results.

"The point is that for many people, it was their first opportunity to express that sense of frustration and I think the two main parties have borne the brunt of that," Gwynne, Labour Party's shadow communities secretary, told the BBC.

Approaching the half-way stage, the Conservatives had lost control at 16 town halls and Labour three, with leadership in more council chambers certain to change hands as counting resumed Friday morning.

The Green Party was also the beneficiary of public dissent as thousands of traditional Conservatives and Labour voters turned to it.

Elections expert Professor John Curtice from Strathclyde University said the Green Party has had its best ever results while the gains of the Liberal Democrats had restored it to the traditional party of so-called pavement politics, while independent candidates had gained major ground.

"The picture of local government is going to be different after these elections," Curtice said.

"This has been a night under which the traditional dominance of the Conservatives and Labour over politics in Britain has come under substantial challenge. Very unusually both parties have seen their vote fall back and both are suffering loses," he added.

Curtice told the BBC there has been a north-south divide, with Conservatives shedding more seats in the south of England and Labour losing more in its traditional northern heartland.

Both the Conservatives and Labour were bracing themselves for more bad results as the counting continued, with the picture expected to be completed by early afternoon.