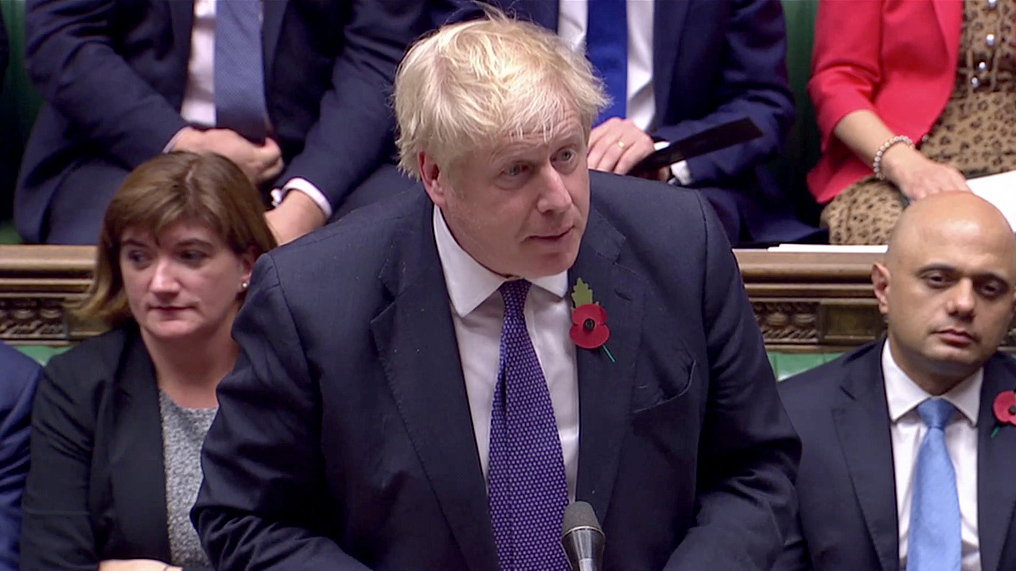 LONDON, Oct. 29 (Xinhua) -- Political leaders in Britain gave their reactions Tuesday after lawmakers in the House of Commons voted for a snap general election on Dec. 12, with British Prime Minister Boris Johnson predicting a tough election in about six weeks.

The prime minister told journalists that it will be a tough election as he left a meeting of backbench Conservative MPs.

"It's time for the country to come together to get Brexit done," Johnson said.

Media reports said Johnson was given a rapturous reception when he arrived at the meeting in the House of Commons.

Politicians cheered and ceremoniously banged on the tables as he entered the room.

On Tuesday night, legislators voted 438 to 20 to endorse the British government's bid for the general election to be held on Dec. 12, a major victory for Johnson, who suffered repeated defeats in the House of Commons over his Brexit efforts after taking office in July.

Jeremy Corbyn, leader of the main opposition Labour Party, described the election as a once-in-a-generation chance to transform Britain, and take on vested interests holding people back.

"The choice at this election could not be clearer," he said. "A Labour government will be on your side, while Boris Johnson's Conservatives who think they're born to rule, will only look after the privileged few."

"We will now launch the most ambitious and radical campaign for real change that our country has ever seen," he said. "This is our chance to build a country for the many not the few and fit for the next generation."

The election will take place less than two weeks before one of Britain's most significant holidays, the Christmas period.

The Daily Mail newspaper said British people will get the final say on the Brexit crisis after Johnson won his bid to force the first pre-Christmas election in nearly 100 years.

On Monday, European Union leaders have agreed in principle to delay Brexit until Jan. 31, 2020.