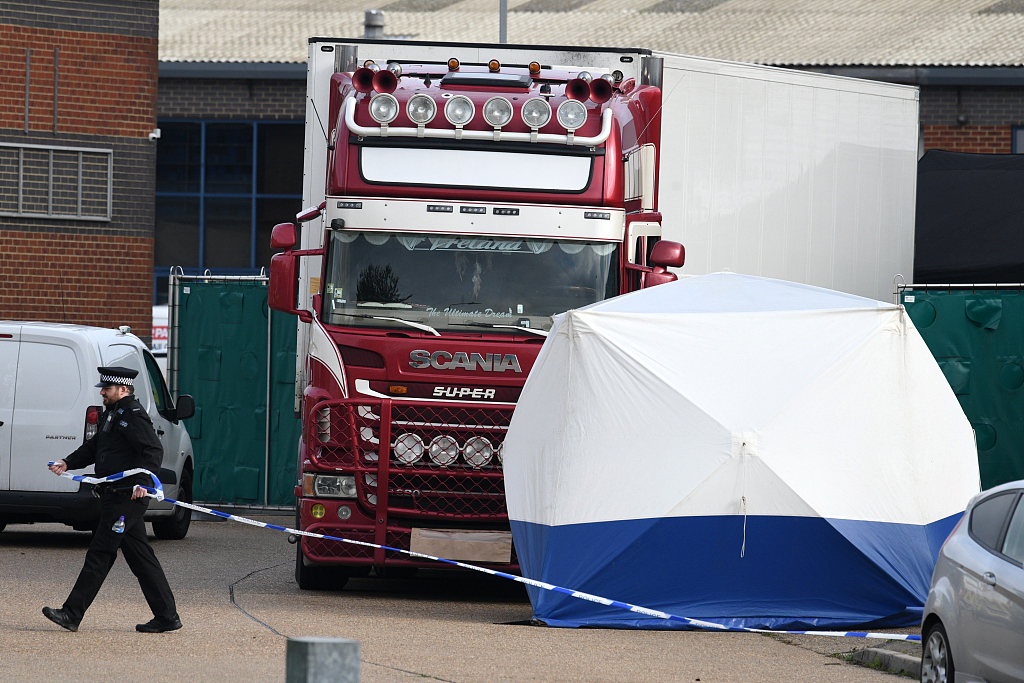 Police stand guard at the site where 39 bodies were discovered in the back of a lorry on October 23, 2019 in Thurrock, England. (Photo: VCG)

LONDON, Oct. 29 (Xinhua) -- British police on Tuesday launched a manhunt for two brothers who are wanted on suspicion of manslaughter and human trafficking over the deaths of 39 people whose bodies were found in a lorry in Essex, southeast England.

Ronan Hughes, 40, and his brother Christopher, 34, both from Armagh in Northern Ireland, are being sought by the police investigating the incident.

Detectives from Essex Police released information and photographs of the two men on Tuesday.

"Finding and speaking to the Hughes brothers is crucial to our investigation," said Detective Chief Superintendent Stuart Hooper, who is leading the investigation into the tragic event.

"At this time we believe they are in Northern Ireland but they also have links to the Irish Republic," Hooper explained.

"If you know where they are or have any information about their whereabouts I need you to call my team," said the detective, adding "This is a case where 39 men and women have tragically died and support from the community is going to be vital to help bring those responsible to justice."

The bodies of eight women and 31 men were found in a refrigerated trailer attached to a lorry in an industrial park in Grays in the early hours of last Wednesday.

All of the victims have since been moved from the vehicle to Broomfield Hospital in Chelmsford for post-mortem examinations.