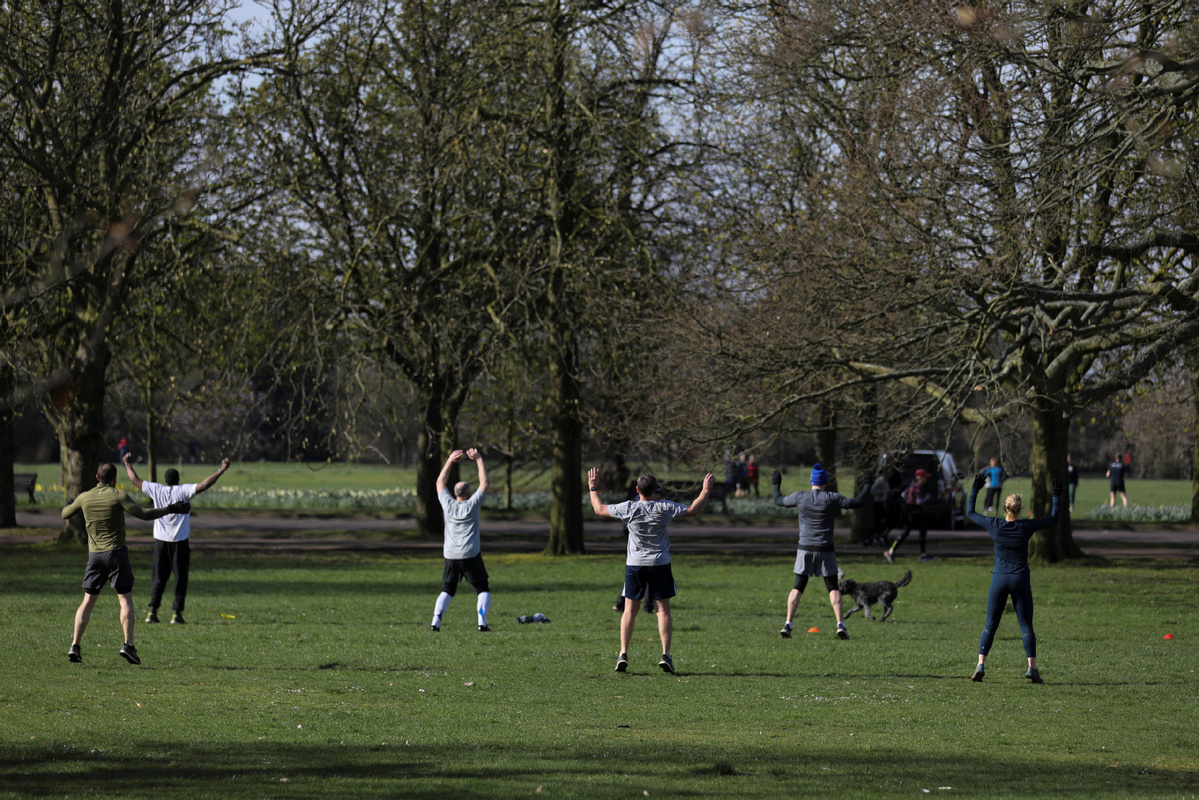 People practice social distancing as they exercise, amid the novel coronavirus outbreak, in Greenwich Park in London, on Sunday. (Photo: REUTERS)

British Prime Minister Boris Johnson on Sunday reiterated the importance of social distancing and that to protect the National Health Service (NHS) the country has now reached the stage where special steps must be taken to shield the most vulnerable.

The number of people who have died from coronavirus in the United Kingdom now stands at 281－a rise of 47 over the course of 24 hours－the government has said. There are now 5,683 confirmed cases in the UK－an increase of 665 from Saturday.

Worst-hit Italy has reported 651 new deaths from coronavirus, taking the total number of dead to 5,476, the Civil Protection Agency said.

According to official figures, the number of confirmed cases has risen from 53,578 to 59,138, a 10 percent increase. This is the lowest rise in percentage terms since the contagion came to light on Feb 21, according to the Reuters news agency.

The British government is now asking 1.5 million people identified by the NHS as being at "higher risk" of severe illness not to leave their homes. Johnson said that the shielding of this group will do more than many other measures to reduce the number of coronavirus cases.

Those people will receive letters or text messages strongly advising them not to go out for 12 weeks to protect themselves, the government said. They include people who have received organ transplants, are living with severe respiratory conditions such as cystic fibrosis or specific cancers, such as blood or bone marrow.

Johnson said he understands people want to enjoy outdoor spaces, but that everyone must follow social distancing advice. "Don't think that fresh air in itself provides some sort of immunity," he said. "If we can't do that I am afraid we are going to need to bring forward tougher measures."

Several Sunday newspapers carried comments from Johnson that, like in Italy, the health system risked being "overwhelmed" if measures were not followed strictly. "The numbers are very stark, and they are accelerating. We are only a matter of weeks－two or three－behind Italy," Johnson said.

"Unless we act together, unless we make the heroic and collective national effort to slow the spread－then it is all too likely that our own NHS will be similarly overwhelmed," he said.

The UK has closed schools for most pupils, told pubs and restaurants to shut and asked people to avoid unnecessary social interactions so that intensive care units in the country's state healthcare system can handle the epidemic.

With families tempted to gather for Mother's Day on Sunday, Johnson had warned the nation not to visit loved ones for the sake of the NHS.

The BBC reports that NHS has struck a deal with the private hospital sector, giving the institution more ventilators and thousands of extra beds and healthcare staff.

Across England an extra 8,000 hospital beds, nearly 1,200 ventilators and almost 20,000 fully qualified staff will be available from next week, it said.

NHS workers have made a desperate plea to the government for better protective equipment.

In a letter published in the Sunday Times, the group of nearly 4,000 medics called on the prime minister to "protect the lives of the life-savers" and resolve the "unacceptable" shortage of protective equipment.

The Italian government has ordered that all businesses must close until April 3 in its latest desperate effort to halt the epidemic. The Italian region of Lombardy introduced stricter measures with new rules announced late on Saturday, so that sport and physical activity outside, even individually, are now banned.

The Spanish government has decided to extend for another 15 days the state of emergency announced on March 14 to deal with the novel coronavirus pandemic, local newspapers reported on Sunday.

Spain's government said it would do whatever was needed to combat the pandemic and warned that "the worst is yet to come" after the national death toll of the virus jumped to 1,326 from 1,002 the day before. The number of cases also rose from 19,980 to 24,926.

Germany currently has the lowest mortality rate of the 10 countries most severely hit by the pandemic: 0.3 percent compared to 9 percent in Italy and 4.6 percent in the UK, reports the Guardian. Germany had 22,364 confirmed infections by Sunday morning, with so far just 84 reported to have died. The nation has now ordered people not to meet in groups bigger than two outside work and home.

Media in France were reporting the first case there of a hospital doctor dying after being infected with the coronavirus. France's Health Minister Olivier Veran said on Sunday that "to his knowledge", it was the first death of this type in France.

Meanwhile, the Financial Times reports that the UK government is considering buying equity stakes in airlines and other companies hardest-hit by the coronavirus.

The option would be to inject billions of pounds of taxpayers' money into companies including British Airways in exchange for shares that would eventually be sold back to private investors.

Two sources told the FT that the government was considering the move after bankers warned the 330 billion pounds ($392 billion) in loan guarantees announced by the chancellor last week may not prevent some companies from collapsing, including airlines whose revenues are expected to dry up in the case of a global aviation shutdown.