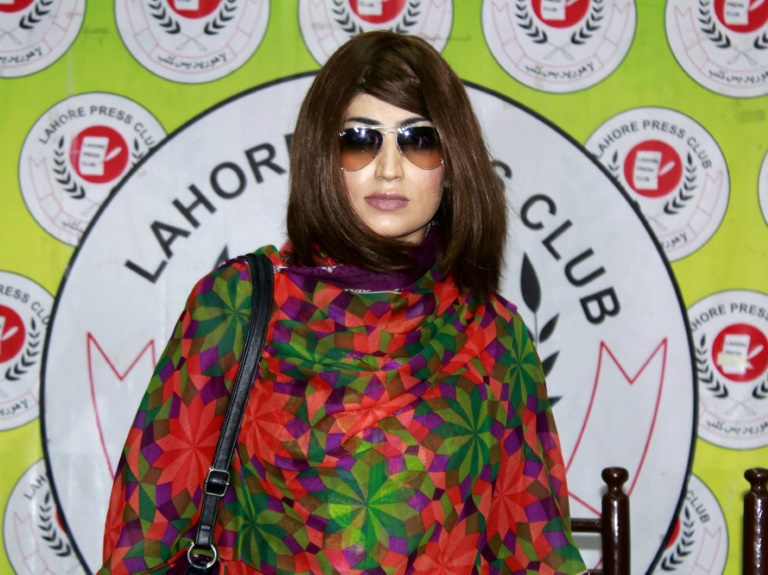 Baloch, who shot to fame for her risque selfies -- tame by Western standards, but considered provocative in deeply misogynistic Pakistan -- was murdered in July 2016. (Photo: AFP)

The brother of Pakistani social media star Qandeel Baloch was on Friday sentenced to life in prison for her murder -- the patriarchal country's highest-profile "honour killing".

Baloch, 26, who shot to fame for her risque selfies -- tame by Western standards, but considered provocative in deeply misogynistic Pakistan -- was strangled in July 2016.

Her brother Muhammad Waseem was arrested. Days later he told a press conference that he had no remorse over what he did, saying that "of course" he had murdered his sister and that her behavior had been "intolerable".

His lawyer, Sardar Mehboob, told AFP the court in the eastern city of Multan had found his client guilty and sentenced him to life imprisonment, in a long-awaited verdict.

"Inshallah (God willing), he will be acquitted by a high court," he said.

Five others were acquitted by the court, including an Islamic cleric Mufti Abdul Qavi who had been embroiled in controversy with Baloch months ahead of her death.

"We are distraught by this verdict. The government is still enslaved to the whites and is bowing to their rules," said Baloch's brother Aslam Shaheen, who was among the acquitted.

"He is innocent. She was my daughter and he is my son," she said.

Baloch's murder made international headlines and reignited calls for action against an epidemic of so-called "honour killings", in which a victim -- usually a woman -- is murdered for flouting patriarchal social codes.

Women have been burned, shot, stabbed and strangled for offences such as choosing their own husband or -- in Baloch's case -- bringing "shame" on their family by celebrating their sexuality.

The killings are usually carried out by a close relative. Under Pakistan's Qisas (blood money) and Diyat (retribution) law, they can then seek forgiveness from a victim's relatives.

The roots of "honour" killings lie in tribal social norms which remain prevalent across South Asia and dictate the behaviour of women in particular.

Sanam Maher -- the author of the book "A Woman Like Her: The Short Life of Qandeel Baloch" -- said the verdict sent a "powerful statement" but warned that it would take more than a court decision to reverse deep-seated prejudices.

"I don't think we can say that the court's verdict is going to fix everything. It's a band-aid on a bullet wound," Maher told AFP.

However, whether murder is defined as a crime of honour is left to the judge's discretion, meaning that killers can theoretically claim a different motive and still be pardoned.

In Baloch's case, her parents initially insisted their son would be given no absolution.

But, heartbroken at the thought of losing him too, they changed their minds and said they wanted him to be forgiven.

International revulsion at the killing had seen the Pakistani state take the unprecedented step of declaring itself an heir alongside the parents, however, forcing the case to move ahead.

Baloch is known for having offered to perform a striptease for the Pakistani cricket team and donning a plunging scarlet dress on Valentine's Day.

She attracted criticism and threats but was perceived by many, including young people, as breaking new ground for creating herself as a strong figure in a bold, political act of women's empowerment.