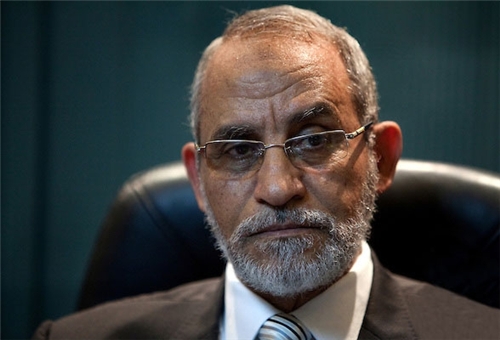 The Muslim Brotherhood spiritual leader Mohamed Badie, who was charged of committing violence and murder outside a mosque in Giza province, was found innocent on Thursday by an Egyptian court.

Badie, along with other six prominent figures of the Brotherhood, have initially been sentenced to life in jail in 2014 for killing ten people and wounding 20 others, official news agency MENA reported.

Life sentence is 25-year imprisonment in Egypt, according to the law.

The case dated back to August 2013 after the army toppled the Islamist leader Mohamed Morsi due to mass protests against his rule.

The defendants were accused of gathering on purpose of committing murder, sabotage, causing disorder and destroying public properties.

The prosecution said the defendants had ordered other members to use molotov and live ammunition against the police.

This is the first time that Badie has been declared innocent. He is now serving death verdict and three life sentences over charges of killing, jailbreak and spying for foreign countries.