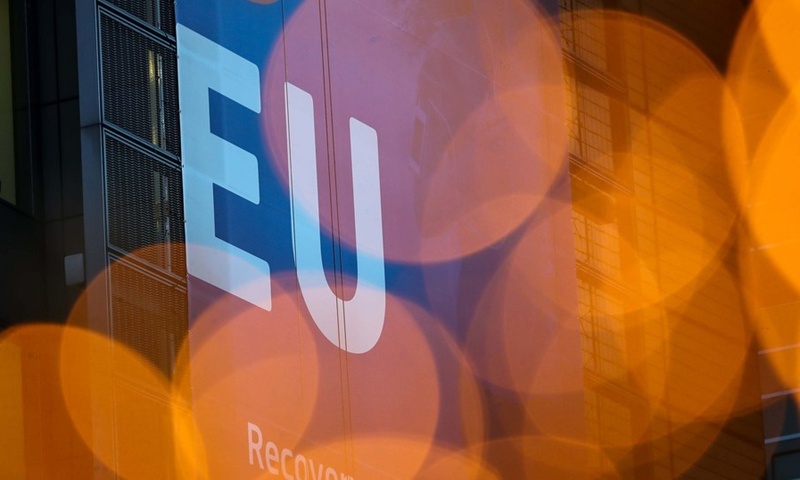 The headquarters building of the European Commission is seen through Christmas decorations at Schuman Square in Brussels, Belgium, Dec. 8, 2020. (Photo: Xinhua)

The European Commission on Tuesday warned Poland that it would demand fines if the authorities refused to conform with a ruling from the EU's top court on judicial reforms.

"Poland needs to inform us about the measures forseen to that effect by August 16, as requested by the court. Failing that the commission will request the European Court of Justice to impose a penalty payment on Poland," commission vice president Vera Jourova said.

Warsaw and Brussels have been at loggerheads for years over reforms pushed through by the Polish government, which is led by the right-wing Law and Justice (PiS) party.

Poland's Deputy Justice Minister Sebastian Kaleta said on Tuesday: "The commission is acting in bad faith, in violation of treaty standards and ignoring Poland's constitutional order." "Further invitations to talks constitute a legitimisation of these actions," he added on Twitter.

The Polish law on reforming the judiciary, which came into force in February in 2020, prevents judges from referring questions of law to the European Court of Justice.

It set up a "disciplinary chamber" to oversee judges, with the power to lift their immunity to expose them to criminal proceedings or cut their salaries. The EU court last week ordered Poland to cease all activities of the "disciplinary chamber" and said that a central part of the judicial reforms was "not compatible" with the law.

The government argues the reforms are necessary to tackle corruption and end Communist-era legacies in the judiciary.

But the European Commission says they undermine rule of law and has sought to bring Poland, as well as Hungary, back into line with what it sees as European democratic norms.

Poland's Constitutional Court on Wednesday defied Brussels with its own ruling saying that any interim measures from the EU court against Poland's judicial reforms were "not in line" with the Polish constitution.

Government critics said the ruling constituted a departure from the EU's legal order, dubbing it a kind of "Polexit."