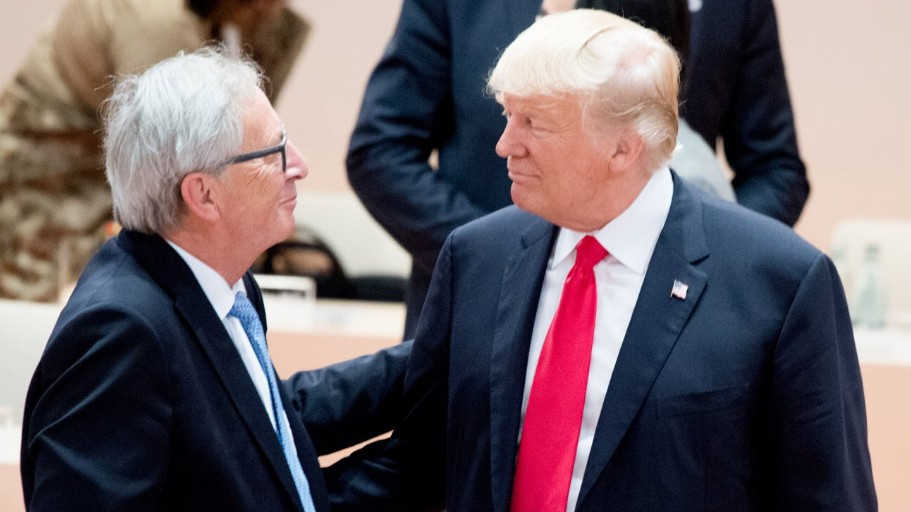 The president of the European Commission Jean-Claude Juncker is meeting with Donald Trump after the US leader called the European Union (EU) a "foe."

Ahead of the meeting with the EU, Donald Trump tweeted to say "The European Union is coming to Washington to negotiate a deal on Trade. I have an idea for them. Both the US and the EU drop all tariffs, Barriers and Subsidies! That would finally be called Free Market and Fair Trade! Hope they do it, we are ready – but they won't!"

Under the Obama administration, the EU and US were negotiating a deal to drop nearly all tariffs as part of the Transatlantic Trade and Investment Partnership (TTIP) – the talks have been dropped since Trump's election.

In June, Washington decided to impose tariffs of 25 percent on EU steel imports and 10 percent on aluminum, causing Brussels to retaliate by imposing 25 percent duties on iconic American products like Levi's jeans and Harley Davidson motorbikes, worth about $3.4 billion in total.

The EU has also now imposed tariffs on all steel entering the bloc in order to counteract oversupply in other parts of the world due to the US imposing tariffs on them also. Brussels is afraid of countries like India and China flooding the EU market as they've also been hit by American tariffs.

All of this will provide the backdrop for the meeting between Juncker and Trump.

The EU commission president and former Luxembourg prime minister is known as a strong economist and a friendly figure.

He's met President Trump on numerous occasions, at events like the G7 and NATO summits, but Juncker hopes his personality will win the US leader over this time.

Donald Trump, on the other hand, wants to rebalance the $150 billion US trade deficit that is currently in the EU's favor, which is why he's embarked on overhauling America's trade relationships with its traditional allies.

Trade between the two sides exceeded $740 billion US in 2017 and the two are the world's largest integrated markets – and that's why the EU's trade commissioner Cecilia Malmstrom is joining Juncker in Washington DC.

The Swede has regularly decried the tariffs imposed by Trump, saying "it's unfortunate because the motivation behind this is not relevant. It is pure protectionism. European steel and aluminum exports to the United States can not be seen as a threat to their internal security."

The main aim for the EU delegation will be to try to talk Trump out of following through with his plan to impose a 20 percent tariff on EU car exports into the US.

The International Monetary Fund (IMF) reckons this move alone could wipe out 0.5 percent of all global growth and the EU says 120,000 American jobs rely on the industry.

Governments across the EU, especially major car exporters France and Germany, will be watching the Washington meetings carefully and hoping Juncker can convince President Trump and prevent him from imposing the automobile tariffs.