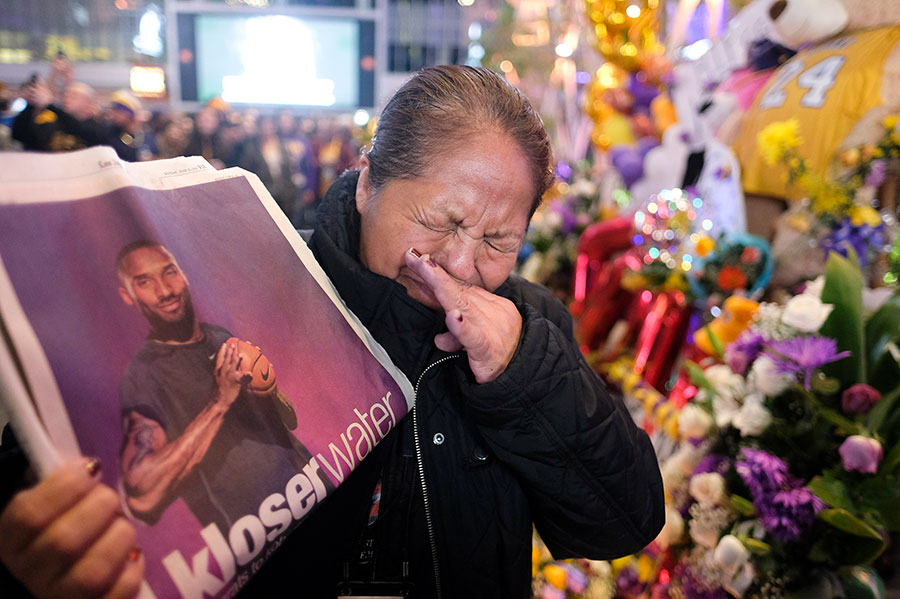 A tearful Ana Sebastian from Guatemala pays her respects to Kobe Bryant at a memorial for the basketball legend near the Staples Center in Los Angeles on Jan 27, 2020. (Photo: Agencies)

LOS ANGELES - The crash that killed nine people including Kobe Bryant has led to calls for crash-warning systems to be installed in more helicopters, but regulators and pilots worry that the instrument can trigger too many alarms and prove distracting.

"Another warning system screaming at you isn't going to help," said Brian Alexander, a helicopter pilot and aviation lawyer.

All nine people killed in the crash were officially identified as of Wednesday night, according to the Los Angeles County Department of Medical Examiner-Coroner.

The death of the basketball star on Sunday has highlighted the debate over the merits of what's known as the Terrain Awareness and Warning System, or TAWS, which would have sounded a voice alarm if the aircraft was in danger of hitting the ground or some object, such as a tower or a wire.

Officials at the National Transportation Safety Board, or NTSB, say it is too early to tell whether a TAWS on Bryant's Sikorsky helicopter could have prevented the crash. But they think it should have been installed on the aircraft, and they criticized federal regulators for not carrying out the NTSB's recommendation over a decade ago to mandate such equipment on helicopters with six or more passenger seats.

While some pilots believe TAWS is unnecessary and refer to its warnings as "nuisance alarms," Peter Goelz, a former managing director of the NTSB, said there is "no reasonable excuse" for the system not to be installed on all choppers.

The NTSB recommended that the Federal Aviation Administration, or FAA, require the system after a Sikorsky S-76A carrying workers to an offshore oil-drilling ship, crashed in the Gulf of Mexico near Galveston, Texas, killing all 10 people aboard in 2004.Ten years later, the FAA mandated such systems on air ambulances only.

FAA officials had questioned the value of such technology on helicopters, which tend to fly close to buildings and the ground and could trigger too many alarms.