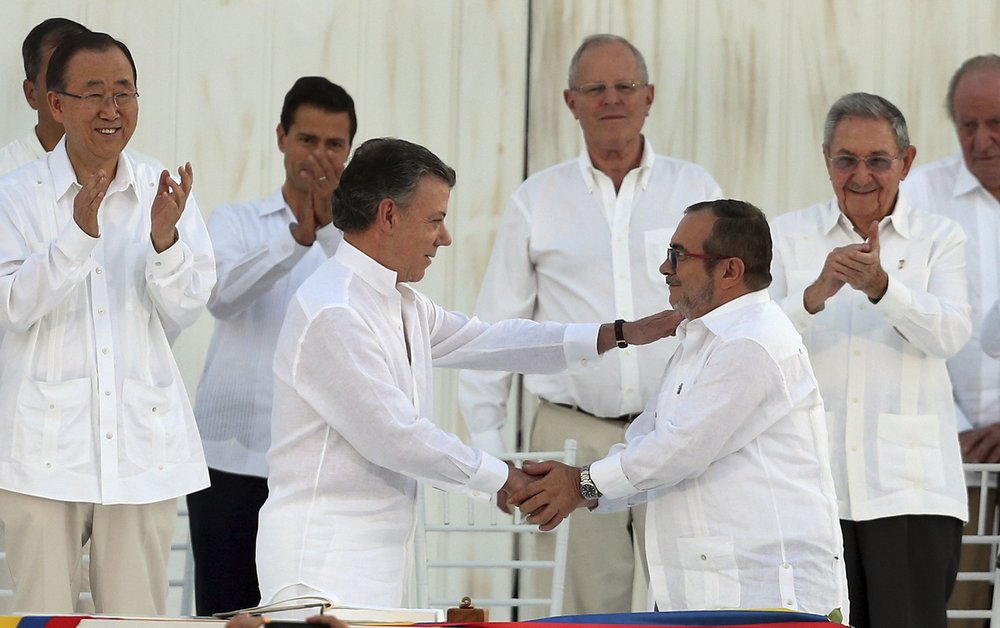 Colombia's President Juan Manuel Santos, front left, and the top commander of the Revolutionary Armed Forces of Colombia, FARC, Rodrigo Londono, known by the alias Timochenko, shake hands after signing the peace agreement between the government and the FARC to end over 50 years of conflict, in Cartagena, Colombia, September 26, 2016.  (Photo: AP)

On the day that Colombia announced its first case of the new coronavirus, Astrid Conde’s body lay in a morgue with four gunshot wounds to the chest, the latest casualty in a scourge of violence against former rebel soldiers.

Lockdowns prompted by the pandemic may have slashed overall crime in Colombia, but the killings of ex-combatants like Conde have continued, and the COVID-19 crisis itself is putting yet more strain on the already fragile implementation of the historic 2016 accord that ended a half-century of conflict.

Conservative politicians are eyeing the possibility of diverting funds originally destined for the accord to pandemic response instead. Nascent projects aimed at providing ex-combatants with a livelihood are up against a recession. And illegal armed groups still rule rural areas, continuing to threaten and murder those who challenge them.

Twenty-three ex-combatants have been killed thus far in 2020, almost double the number seen at this point the previous year, according to United Nations data. Five of those slayings have come since March 24, when President Ivan Duque ordered the entire nation on lockdown.

“Now when you go out, you don’t know what will kill you – a bullet or coronavirus,” said Luz Marina Giraldo, whose ex-combatant husband was shot to death last year.

Conde was gunned down while walking her German shepherd in a park near her home in a rough Bogota neighborhood on March 5. Her blood was still visible on the paved path the next day as news of the slaying filled the airwaves.

That afternoon, with the arrival of COVID-19, radio stations quickly shifted their focus. Outside the morgue, men gathered around a newsstand to smoke and discuss whether they should buy face masks. Two days later, Conde was buried in a cemetery where some families are so poor they write the names of their dead on tombs with a marker.

“What happened to Astrid is more evidence that a genocide has begun against us,” said Adela Perez, an ex-combatant who attended the funeral.

Deaths of former guerrillas who surrendered their arms to end Latin America’s longest-running conflict peaked last year and are now at 197. That violence is considered one of the most crucial concerns about the accord’s implementation. Supporters of the accord say that if Colombia cannot protect those who voluntarily give up their weapons, it raises serious questions about the long-term success of the peace process.

“She trusted in the peace process,” said Juan David Bonilla, Conde’s lawyer. “So much so that she trusted even in the banality of daily life.”

Analysts warn that the quarantine could actually be putting ex-combatants further in harm’s way. By staying inside – in one place – they might be easier for criminal groups to track down.

“In rural areas, it feels much more dangerous,” said Manuel Antonio González, an ex-combatant whose rebel son was killed before the pandemic. “People aren’t moving, but these groups can move however they want.”

The majority of the deaths are taking place in conflict-ridden areas where armed groups compete over drug routes. Analysts say some are being killed after rejecting attempts by dissident rebels to recruit them. Former rebels believe some of the attacks come from right-wing paramilitaries who want to crush their adversaries, peace accord or no. In at least one case, military officers have been charged in an ex-rebel’s death.

Colombia’s chief prosecutor blames drug trafficking groups for 75 percent of the crimes. Authorities say they’ve made “advances” in solving nearly 45 percent of 228 homicides, attempted murders and forced disappearances of ex-combatants. But to date only 23 people have been sentenced.

Many of those are the so-called “material authors” of the crimes – hitmen – who, as is alleged in Conde’s case, were contracted to do the crime.

According to an initial police report, Jhonatan Sneider, 28, was approached by a man in a white Toyota who goes by the name “Trivilin” three days before the killing and offered 15 million pesos — worth about $4,300 at the time – to kill her.

To date, he is the only person who has been arrested in her death.

“We don’t know who is behind this,” Bonilla said.

Like many ex-combatants, Conde joined the Revolutionary Armed Forces of Colombia when she was still a teen, a friend said, though the circumstances of her recruitment are not known. She became part of the guerrillas’ communications team and later had a son with a commander who is now a prominent rebel dissident.

Female guerrillas were largely prohibited from having children, but exceptions were sometimes made, on condition that once born, infants would be turned over to a relative or friend.

Conde did not see her son for years, and after being captured in 2012, told fellow inmates she was happy that behind bars, at least he got to visit.

She was charged in connection with a rebel attack on a military base that left 19 dead and released after the signing of the peace accord.

“For the first time in a long time, she got to feel like a mom,” Perez said. “Such a simple thing, but that the war robbed from us.”

Several friends said Conde was fully committed to peacetime life. Now in her mid-40s, she was studying to get her high school diploma and taking odd jobs like cleaning apartments. The government had recently approved funding for her project to raise cattle in the countryside near her family.

Before her death, she told her son she’d seen strange men watching her enter her apartment building, but brushed it off.

At Conde’s funeral, relatives gathered around her mahogany coffin draped with a spray of white roses. A priest read from a red leather Bible and a young man sang “Do what you want with me,” while playing a keyboard. Afterwards, her family boarded a bus to the cemetery where above-ground crypts are discolored by pollution and graffiti.

Their vehicle came to a stop at the entrance, where they were greeted by a message spray-painted in red on the cemetery’s outer wall.

“Only the dead know the end of war,” it read.