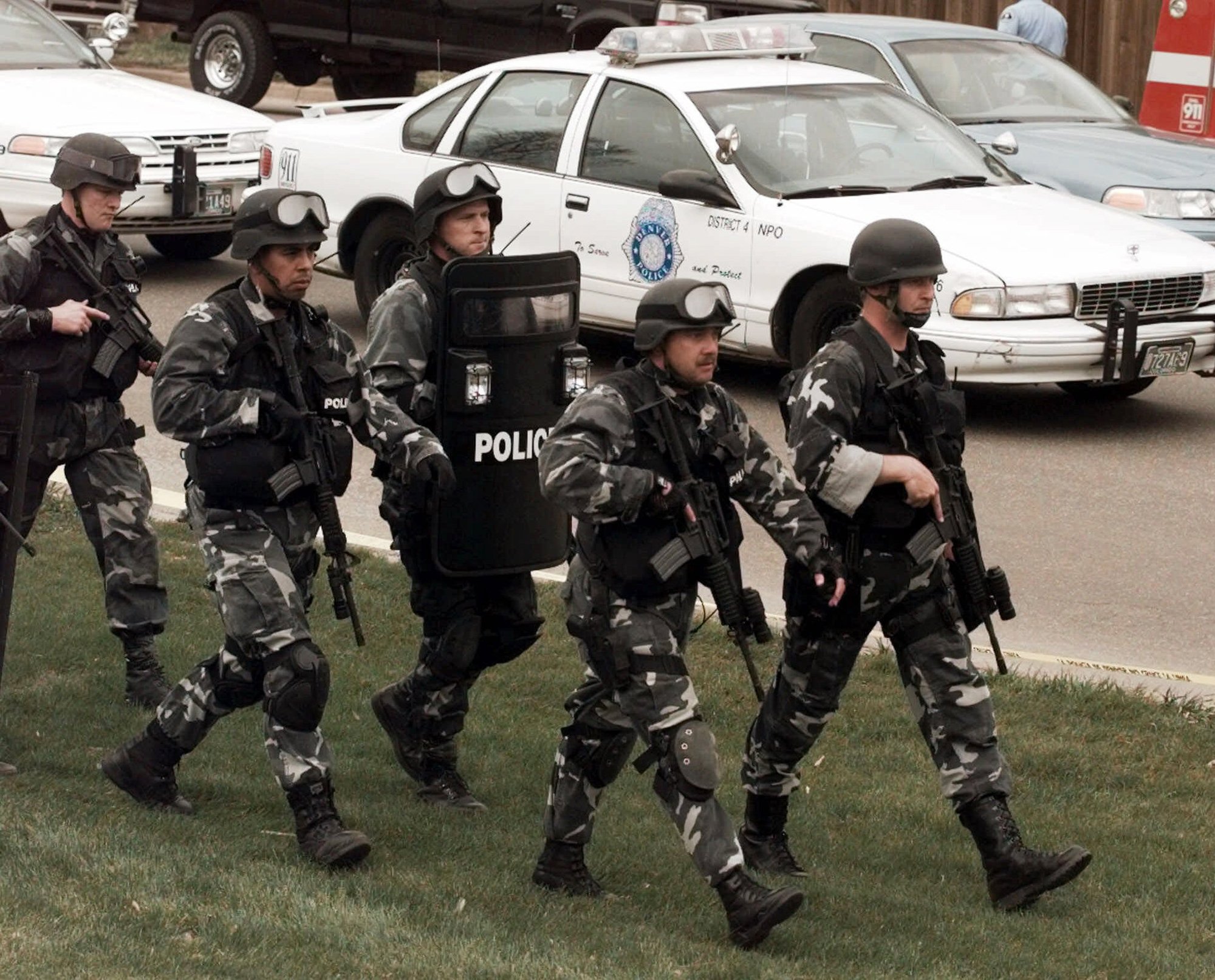 In this April 20, 1999, file photo, members of a police SWAT team march to Columbine High School in Littleton, Colo., as they prepare to do a final search of the school after two gunmen opened fire on campus. (Photo: AP)

Twenty years after the Columbine High School shooting made practicing for armed intruders as routine as fire drills, many parents have only tepid confidence in the ability of schools to stop a gunman, according to a new poll by The Associated Press-NORC Center for Public Affairs Research.

And while most Americans consider schools less safe than they were 20 years ago, the poll finds a majority say schools aren’t at fault for shootings. Bullying, the availability of guns, the internet and video games share more of the blame.

Lee Wisdom, a mother of two in Downingtown, Pennsylvania, believes students and staff have been trained as much as possible to prepare for an attack, but worries schools are still vulnerable to things beyond their control, like a parent holding the door for a stranger or a child sneaking his father’s gun in a backpack.

“As far as inside the school, we’re doing all we can to keep students safe,” she said. “It is the outside of the school and the people who are coming in and out that I think are the weak link,” said Wisdom, who sees school violence as a product of violent video games, TV shows and the internet’s opportunities to bully and isolate.

Half of Americans blame students being bullied a great deal for school shootings. Roughly a third say the same of the internet and television, music and video games.

By and large, schools themselves are less likely to be blamed: 59% put not much or no blame on schools for the shootings. While roughly 4 in 10 say schools have at least some responsibility, just 9% attribute a great deal of blame.

In the years since two Colorado teenagers gunned down 12 classmates and a teacher in the Denver suburb of Littleton, schools across the country have fixated on planning for threats that before had been unimaginable.

But shootings haven’t stopped, and a little over a year after an armed ex-student allegedly killed 17 people at Florida’s Marjory Stoneman Douglas High School, the survey finds a large majority, 67%, say schools have become less safe. Only 13% say schools have become safer during the last 20 years. The rest say they are about the same.

Along the same lines, despite all of the planning, drills and expense, only about a third of parents are extremely or very confident that their children are safe in school, or that the school could respond to an active shooter. About 4 in 10 parents are moderately confident in their child’s safety and the school’s potential response, while about 2 in 10 have little or no confidence.

And parents of school-age children are especially likely to blame shootings on schools themselves, compared with other adults, 49% to 36%.

Nearly half of Americans strongly blame shootings on the availability of guns, and a majority, 67%, want to see the nation’s gun laws made stricter.

Still, Washington has had little appetite for federal gun reforms despite surges in activism following Columbine and the 2012 shooting deaths of 20 children and six adults inside Sandy Hook Elementary School in Newtown, Connecticut. Last year’s shooting in Parkland, Florida, brought a shift in the political landscape, with the shooting’s young survivors leading a national movement aimed not only at gun reform but a new generation of voters.

Before the Democratic-controlled House in February approved a measure requiring federal background checks for all firearms sales, it had been nearly 25 years since Congress had considered major gun control legislation.

The bill faces dim prospects in the Republican-controlled Senate and President Donald Trump has threatened to veto it, saying it would impose unreasonable requirements on gun owners.

James Kiefer, 75, doesn’t think the availability of guns is as much of a problem as the violence children are exposed to in movies and video games from a young age.

“By the time they’re 16 or 17, they’re pretty much indoctrinated,” the Three Rivers, Michigan, resident said.

“If somebody’s going to do something like that, no matter if the guns are available or not, they’re going to find a way to do it,” he added.

However, the post-Columbine generation, for whom many of those things were routine, are much less likely than older adults to think that those steps would make schools safer.

“What the survey data tell us is that we need to take the next step in our safety efforts to purposefully and strategically communicate how successful our efforts have been in making schools safe, secure places where students can be their authentic selves and learn at their best,” said Bob Farrace of the National Association of Secondary School Principals.

Nor are younger adults as convinced that either stricter gun laws or arming teachers — another subject of political debate — is the answer, even though they are about as likely as those older to support stricter gun laws in the United States. While 44% of adults under 30 say tightening gun laws would improve school safety, 60% of adults over 30 say the same. Half of adults under 30 say arming trained teachers would actually make schools less safe, compared with about a third of those over 30.

“A well-trained teacher with a sidearm could greatly affect what happens in a classroom situation like that,” said the Republican-leaning Kiefer, who retired from the trucking business. “There are enough qualified teachers that can be armed that can help solve problems.”

A federal school safety commission assembled by Trump in response to the Parkland shooting said it should be left to states and schools to decide whether schools should arm staff members, but the president’s Education Secretary Betsy Devos, who led the commission, said schools should “seriously consider” the option. The commission’s December report steers schools to federal funding that can be used for firearm training.

It also finds a racial divide over arming teachers. Close to half of white Americans and half of Hispanic Americans think that would make schools safer, while only about 2 in 10 black Americans say the same.

About 80 percent of white and Hispanic Americans think armed security guards make schools safer, compared with about half of black Americans.

Farrace said in an email that school safety should be a community effort, with law enforcement and public health agencies working to identify potential shooters and intervene before they act.

“We’re under a common illusion,” he said, “that the only way to prevent carnage in schools is a military-style response at the point of attack.”