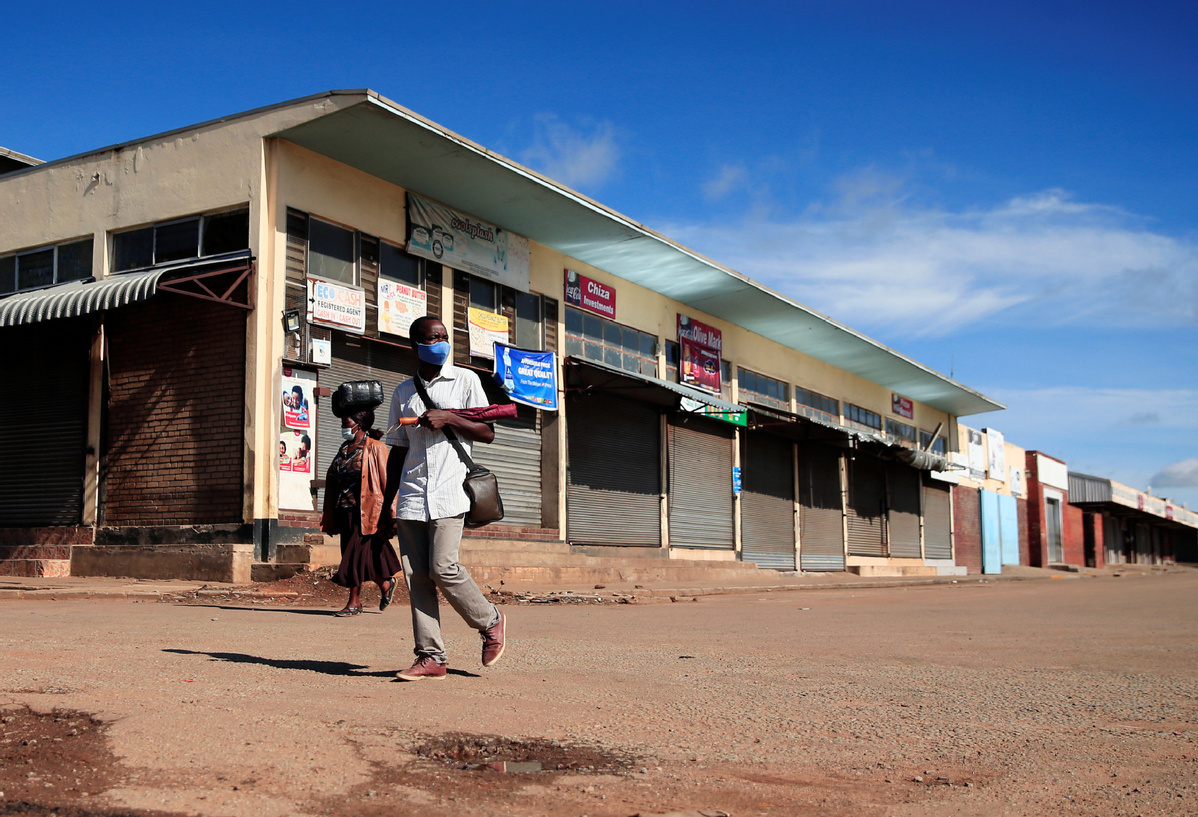 A man wears a mask as he walks past closed shops during a lockdown aimed at limiting the spread of the coronavirus disease (COVID-19) in Harare, Zimbabwe, Jan 28, 2021. [Photo/Agencies]

After experiencing successive seasons of drought, Zimbabwe is poised for a bumper harvest.

The country will produce nearly 3.1 million metric tons of cereal grains, including maize, sorghum, pearl and finger millet, according to the "Second Round Crop and Livestock Assessment Report 2020-21 Season", released by the Ministry of Lands, Agriculture, Fisheries, Water and Rural Resettlement.

Since there is a national requirement of around 2.3 million tons for human and livestock consumption, a surplus of 0.8 million tons will be left.

Maize production is estimated at 2.7 million tons, which is 199 percent higher than the previous season. Production of small grains has gone up 128 percent to nearly 350,000 tons compared with last season.

According to the United Nations, in the last agricultural season, a severe drought left 7.7 million people－about half of the country's population－without food security.

Garikai Chaunza, general manager of the Grain Millers Association of Zimbabwe, said the bumper harvest would help the government reduce the import bill for wheat and maize, and save the country more than $200 million.

"It means an improved economy with sufficient food for both humans and livestock. This would boost production capacity, which was slightly below 40 percent of capacity because of COVID-19 and the nonavailability of grains," he said.

Paul Zakariya, executive director of the Zimbabwe Farmers' Union, said that following a good season, it is imperative to bring joy to farmers through timely payments that encourage them to continue to produce and make a living.

"Farmers will need to be paid cash so that they are able to buy inputs in time for next season", he said. Agricultural inputs include feed, seeds, equipment and fertilizer.

"We also expect correction to be made in the marketing of cotton. Last season was not a very good season for farmers because they didn't get paid as they expected."

Zakariya said the new producer prices for commercial crops for the 2021-22 marketing season were attractive and can work well for farmers who produce more tons per hectare.

Charles Dhewa, CEO of Knowledge Transfer Africa, said bumper harvests were now rare, so there was a need to move with urgency to take advantage of this season's crop.

"As an agri-based economy, when agriculture does well, it boosts industry and communities where people rely on agriculture, but we need to maximize on what we have produced this year," he said.

Dhewa said that, unfortunately for farmers, a glut in commodities was pushing prices down in alternative markets.

"If the prices continue dropping, it means farmers are not going to be able to go back to the field, because the price of inputs doesn't correspondingly go down," he said.

Dhewa said a solution would be to provide value-added commodities or hold back on selling commodities until prices have improved.