WORLD Bumps ahead for Merkel after ally loses shock vote

Bumps ahead for Merkel after ally loses shock vote 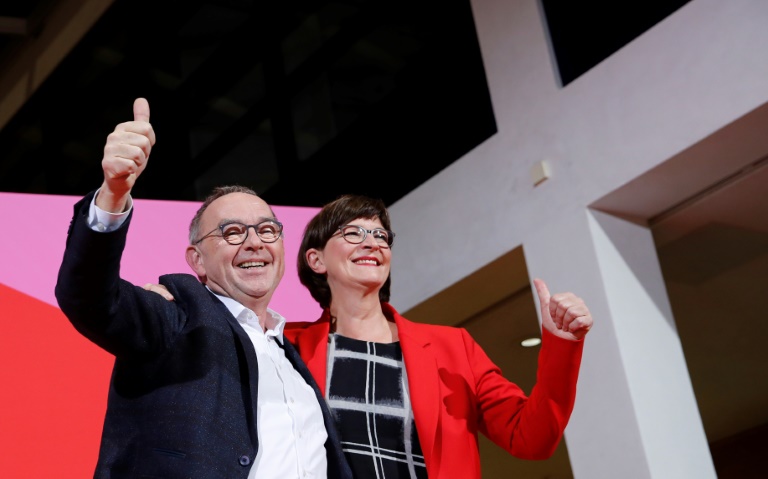 Saskia Esken (R) and Norbert Walter-Borjans were elected co-leaders of Germany's Social Democratic Party Angela Merkel faces a rocky political road ahead as she battles to hang on until 2021 as German chancellor, after her junior coalition partner SPD elected a left-leaning leadership duo.  (Photo: AFP)

The shock result heralded a week of uncertainty for the coalition, with next Friday a key date as the SPD is to vote on whether to stay in government when it meets for its annual congress.

Merkel, in power for 14 years, has said she would step down when her term ends in 2021.

But her departure may well be accelerated following Saturday's stunning vote.

Wounded by an election rout in 2017, the SPD had initially sought to go into opposition, but allowed itself reluctantly to be coaxed into renewing an alliance with Merkel.

Many within the party however remained wary of continuing to govern in Merkel's shadow, fearful that their social roots were being eroded by the conservatives.

The uneasy marriage from the start had left the coalition lurching from crisis to crisis.

A new series of regional and European electoral defeats had finally forced the SPD to seek a new leadership.

Saturday's decision against Scholz is a "solid vote of no-confidence against the party establishment", said left-leaning TAZ daily.

"Within the SPD, it is believed that an exit from the GroKo is very possible" with the new leaders Nobert Walter-Borjans and Saskia Esken, added Bild daily, using the expression for the grand coalition.

Even if an immediate collapse of the government was averted, there is the "possible scenario that (the Social Democrats) would set unacceptable conditions to prepare an exit," added the newspaper.

The SPD's new leaders have already said they will push Merkel's centre-right alliance for greater investment in climate protection.

They have also questioned the "black zero" no new debt policy -- an absolute red line for Merkel and her centre-right alliance.

Merkel herself had just this week branded calls to relook the policy "absurd".

Pointing to record levels in investments planned, she told parliament that "one cannot only find investments good when it brings about debt."

In an interview with the financial daily Handelsblatt he said the promise of "no taking on new debt was one of the most important promises of the (CDU-CSU alliance) during the election campaign."

And Holger Schmieding, chief economist at the Berenberg Bank said: "If the two parties cannot agree on the further tilt of German policies to the left which the SPD activists desire, the coalition would end."

That would leave Merkel with the option of a minority government.

Merkel has repeatedly ruled this out, but right-leaning Die Welt daily noted that this time round, the conditions were "not so bad" since 2020's budget has already been decided.

Ministerial posts vacated by SPD ministers could then be taken up by her conservative alliance.

Her planned successor Annegret Kramp-Karrenbauer could also assume the deputy chancellor role and potentially steer Germany as it takes on the presidency of the EU from next June, added Welt.

For now, party heavyweights on both sides have urged calm.

CDU general secretary Paul Ziemiak stressed that "nothing has changed" in terms of the coalition deal between both sides.

Leading voices in his party have also underlined the responsibility of keeping the government stable.

The SPD's former chief Martin Schulz meanwhile warned his party against flight from the government.

"My advice is that the cure is not to seek an escape from the government, rather it lies in the power to shape things in the government," he told Tagesspiegel daily.