Burning need to safeguard the planet 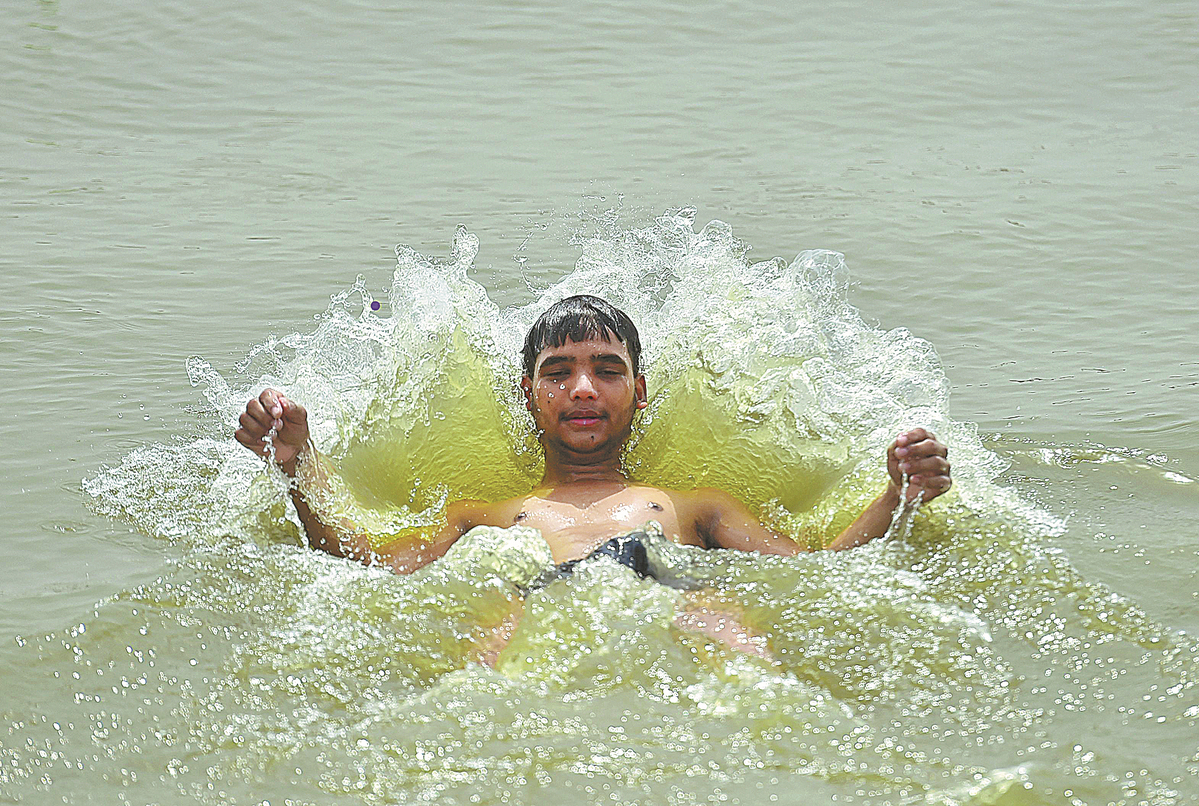 A youth cools off in the Ganges River on a hot summer afternoon in Allahabad, India, on Friday. (Photo: CFP)

Every time a climate change-induced event strikes the Indian subcontinent, it "gives us an edge to understand that climate justice has not been given to us", said Anjal Prakash, research director at the Bharti Institute of Public Policy of the Indian School of Business and a lead author with the Intergovernmental Panel on Climate Change, or IPCC.

While climate change is often blamed on developing countries, it is not their doing, the scientist said. "It is the West, the industrial Global North, (who) have created today's climate change with pollution, and (in the) Global South we are at the receiving end of the problem," he told China Daily.

The expert believes that the pledges made by industrialized countries for adaptation finance must be honored by those nations that have been reluctant to pay up.

The scorching heat waves that have gripped northwestern India and southeastern Pakistan, among other regions, are viewed by scientists across the world as clear-cut, climate change-induced events.

In India, heat waves are not uncommon in May and June. This year's summer started early, however, with high temperatures and heat waves since March.

In April, many weather stations in India recorded temperatures exceeding 45 C. March saw an average maximum temperature of 33.1 C, the highest recorded in India in 122 years, according to the World Meteorological Organization. And Pakistan experienced its warmest March in 61 years.

"In India and Pakistan, the high temperature is unmatched in recent human history … it's been really, really unprecedented," said Prakash. "Heat stress is the climate-induced disaster, which is the slow onset of climate change, impacting people's lives, health, and the infrastructure that we have here."

London-based expert Bob Ward said: "The exceptional period of heat-wave conditions in India and Pakistan is an indication of the way in which climate change is increasing severe risks to human health."

Studies show that these high temperatures are set to become more common. Ward cited a recent report from the United Kingdom's Meteorological Office that concluded that the record-breaking heat waves in India and Pakistan had been made more than 100 times more likely because of climate change.

World Weather Attribution, a network that analyzes climate change effects, published a report on May 23 saying that climate change makes a heat wave as much as 30 times more likely.

According to the WWA, India's heat wave slashed the country's wheat crop yields, leading the government to limit grain exports.

Climate change is the result of an ever-increasing demand for energy, said Sunita Narain, director-general of the New Delhi-based Centre for Science and Environment.

"Emissions from the burning of fossil fuels－coal, oil and natural gas－are the reason why the world is today on the edge of a precipice. The 2022 report of the IPCC reiterates that the impacts of a warming planet will be catastrophic," she said.

Prakash, who was in a working group that contributed to the IPCC's report, said these events come as "no surprise".

But in South Asia, daily wage earners, "are feeling the brunt of it", he said. Suvo Roy, who teaches anthropology at India's Calcutta University, said: "Unless emissions are curbed or cut significantly, we are in for worse days."