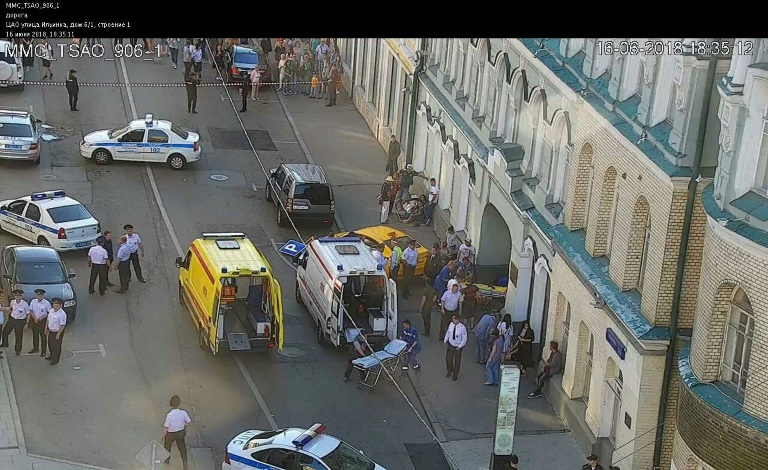 A handout CCTV picture released by the Moscow Municipal Traffic Regulation center shows police officers and paramedics working at the scene after a taxi drove into a crowd injuring seven people (Photo: AFP)

A taxi driver who ploughed into a Moscow pavement on the third day of the World Cup, injuring at least seven people, said in a video released by authorities Sunday he had been working for 20 hours solid before the incident.

The unnamed man said he had slept for only two or three hours before the shift and confused the brake and the accelerator, leading to an "unexpected" loss of control, according to the video on the website of the local interior ministry.

"I do not know how it happened," he said, adding that he had not been drinking and was "very sorry".

The man, who authorities earlier identified as a 28-year-old national of the central Asian republic of Kyrgyzstan, said he ran from the scene fearing he would be killed there, before being taken into custody by police.

CCTV footage distributed on social media Saturday showed the yellow cab turning right as it tried to pass some standing traffic on a one-way street near Red Square.

It accelerated as it reached the crowded pavement and drove a few meters (yards) before hitting a traffic sign and coming to a sharp halt.

The driver eventually jumped out and began running away. The clip ended with the crowd chasing the man down a side street.

An eyewitness account from the police station published on a Russian Telegram channel showed the driver sitting handcuffed on a bench and looking dazed.

The incident occurred about 200 metres (yards) from Red Square with Moscow packed with foreign football fans snapping pictures of the Kremlin.

"Seven of them are in satisfactory condition and one woman is in moderate condition," an unidentified Moscow health department official was quoted as saying.

The RIA Novosti news agency cited an unidentified source as saying that two Mexicans and two citizens of Azerbaijan were hurt.

Police closed the street for about an hour before reopening it to traffic.

Security has been a top concern heading into the June 14 to July 15 tournament.

At least 600,000 foreign tourists are expected to visit Russia during the most watched event in the world.