In the traffic-choked megacity of Cairo, the historic Heliopolis district has long stood out for its leafy boulevards, but now construction crews are cutting new highways through it and uprooting its century-old trees. 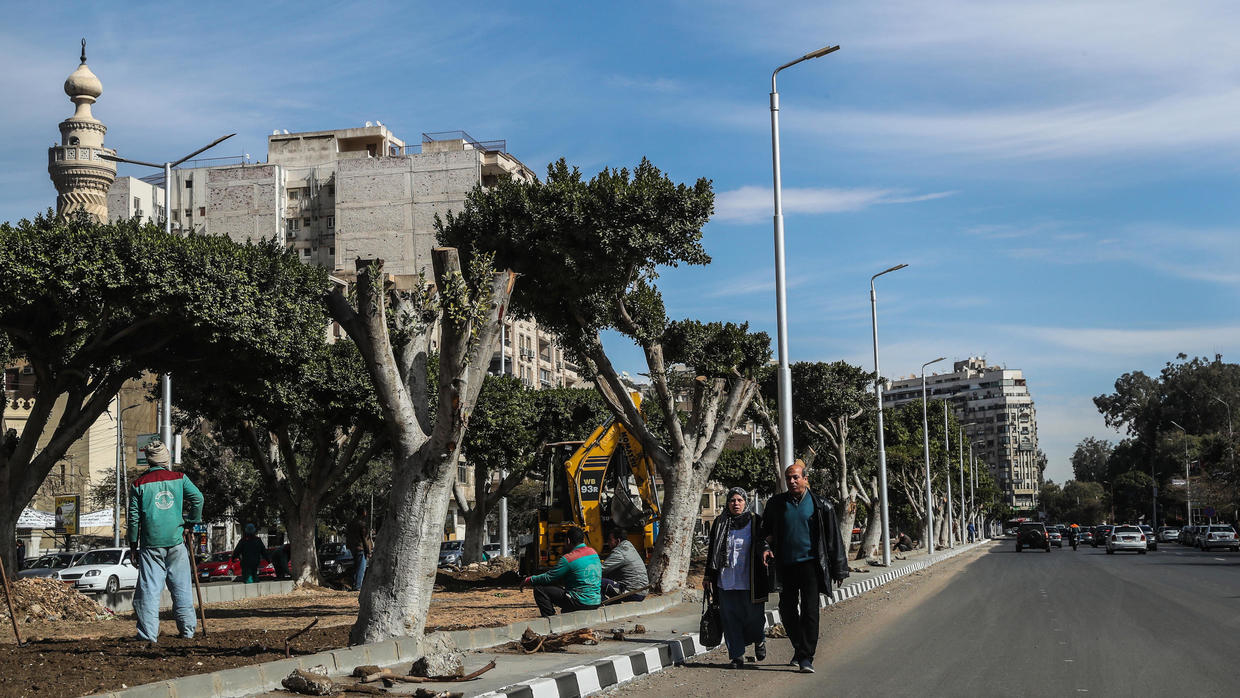 As Egypt announced Tuesday its burgeoning population has passed the milestone of 100 million, President Abdel Fattah al-Sisi's government is pushing on with building a colossal new capital in the desert.

And at least six new highways leading there cut right through Heliopolis, an upmarket district with tree-lined streets laid out in the early 1900s in the style of a mini-European metropolis.

At least 390,000 square metres (96 acres) of green space -- or more than 50 football fields -- have been razed in the past four months, said activist group the Heliopolis Heritage Initiative (HHI).

One local writer decried what she graphically described as "the raping of a suburb ... with its guts spilling out" in a column shared widely online.

Since last August, the military's engineering arm has been building highways worth about 7.5 billion pounds ($450 million) to link Cairo with the pharaonic new capital that is under construction about 45 kilometres (30 miles) to the east.

Known as the New Administrative Capital, it is set to boast skyscrapers, a new presidential palace, dozens of ministries and flats for tens of thousands of civil servants, with the aim of easing Cairo's chronic overcrowding and air pollution.

The first victim of the mega-project, however, is Heliopolis, built in 1906 by Baron Edouard Empain, a wealthy Belgian entrepreneur who settled in Cairo while working on modernising its nascent railways.

He designed the area with wide streets and elegant buildings that meld various design motifs, as embodied in his impressive palace, which is still standing.

As one of Egypt's most expensive suburbs, Heliopolis also houses powerful institutions including the presidential palace, the military academy and several other armed forces facilities.

There are plenty of green spaces, a rarity in the city of about 20 million.

But now Triomphe Square and the lush arterial avenues of al-Nozha and Abou Bakr al-Seddik, marked by palm trees and ficus plants, have become sites for about a dozen routes out of the suburb.

Many residents have been vocal on social media about fatal traffic accidents in recent weeks on new bridges that lack pedestrian crossings or clearly marked speed limits.

Cairo University urban design professor Dalila al-Kerdany slammed the re-zoning of the capital's green lung as "an act of sabotage".

That view was shared by Choucri Asmar, a resident and founding member of HHI, who voiced regret that more cars would choke up the road, instead of the old tramline.

"We have been presented with a fait accompli," he told AFP, sitting in the courtyard of Chantilly, a chic cafe and a venerable institution in the area.

Asmar said no local community consultations were conducted during the planning stages, and that the urban planning decision came "straight from the presidency".

Kerdany also charged that the re-districting was launched "illegally", without approval from Egypt's top heritage body, the National Organization for Urban Harmony.

"Heliopolis was founded for pedestrians, not for cars -- they were always meant to come second", said Alia Kassim, 33, an incensed resident who works in the media.

Kerdany said "the result is frightening... creating a monstrous and unmanageable" mega-city at the expense of green spaces.

Developments are also planned in other historic neighbourhoods with millions of residents, such al-Matariya and Nasr City.

With many Heliopolis residents going on with their daily lives and adjusting to the new routes, HHI has remained active online, documenting the district's vanishing heritage.

Asmar said the initiative will keep up the protest because "if we keep quiet, everyone will be quiet".

But given Egypt's fast-growing and youthful population, pressure for urban expansion is unlikely to ease anytime soon.

Kerdany predicted that, at the current rate, greater Cairo will eventually extend all the way to Suez, about 130 kilometres from Heliopolis.