California battles largest-ever fire as eight killed in western US 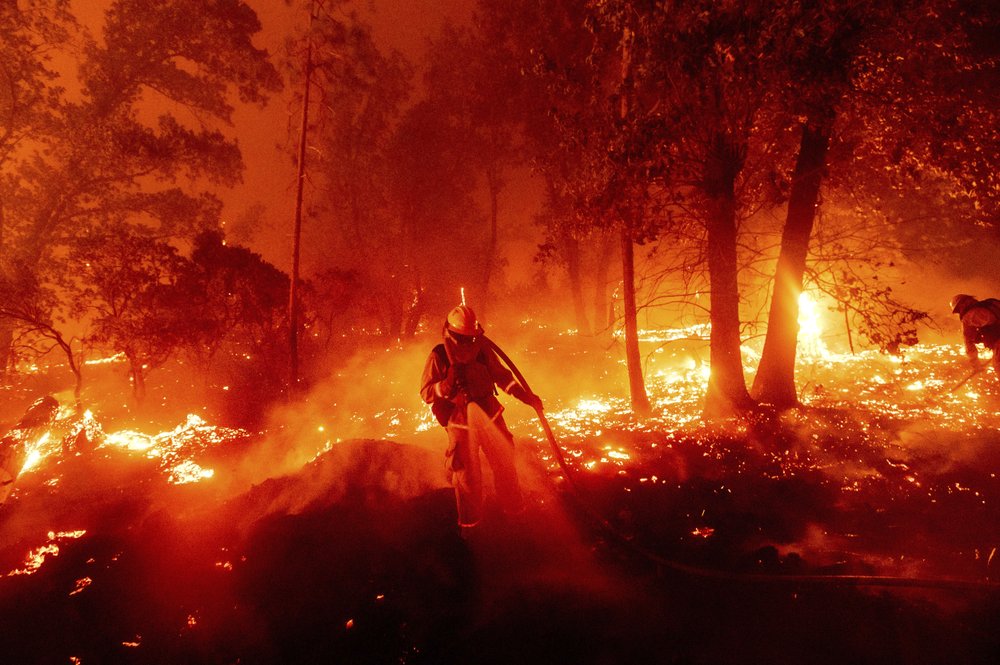 A firefighter battles the Creek Fire as it threatens homes in the Cascadel Woods neighborhood of Madera County, Calif., on Monday, Sept. 7, 2020. (Photo: AP)

California firefighters battled the state's largest ever inferno Thursday, as tens of thousands of people fled blazes up and down the US West Coast and officials warned the death toll could shoot up in coming days.

At least eight people have been confirmed dead in the past 24 hours across California, Oregon and Washington, but officials say some areas are still impossible to reach, meaning the number is likely to rise.

The August Complex Fire became the biggest recorded blaze in Californian history Thursday, after multiple fires in the state's northwest combined amid high temperatures and winds to rip through 470,000 acres of dry vegetation.

In neighboring Oregon, where at least five towns have been "substantially destroyed" and up to 40,000 people evacuated, governor Kate Brown said twice the state's annual average had burned in just the past 72 hours.

"We have never seen this amount of uncontained fire across our state," she told a press conference.

"We know that there are fire related fatalities. And as soon as we are able to provide confirmed information, we will do so."

Local Oregon officials have confirmed two deaths in the Santiam Canyon region, 60 miles (95 kilometers) south of Portland, and another was recorded in the Ashland area, near the California border.

All three West Coast states have been scrambling to contain rapidly spreading wildfires since the weekend due to unprecedented heatwaves followed by intense, dry winds.

Among those killed in the past day was a one-year-old boy who perished while his parents suffered severe burns as they attempted to flee an inferno 130 miles east of Seattle.

"This child's family and community will never be the same," said Washington governor Jay Inslee, in a statement on his state's first fire death of 2020.

"And neither will countless others who are reeling from the utter devastation these wildfires are leaving in their wake." 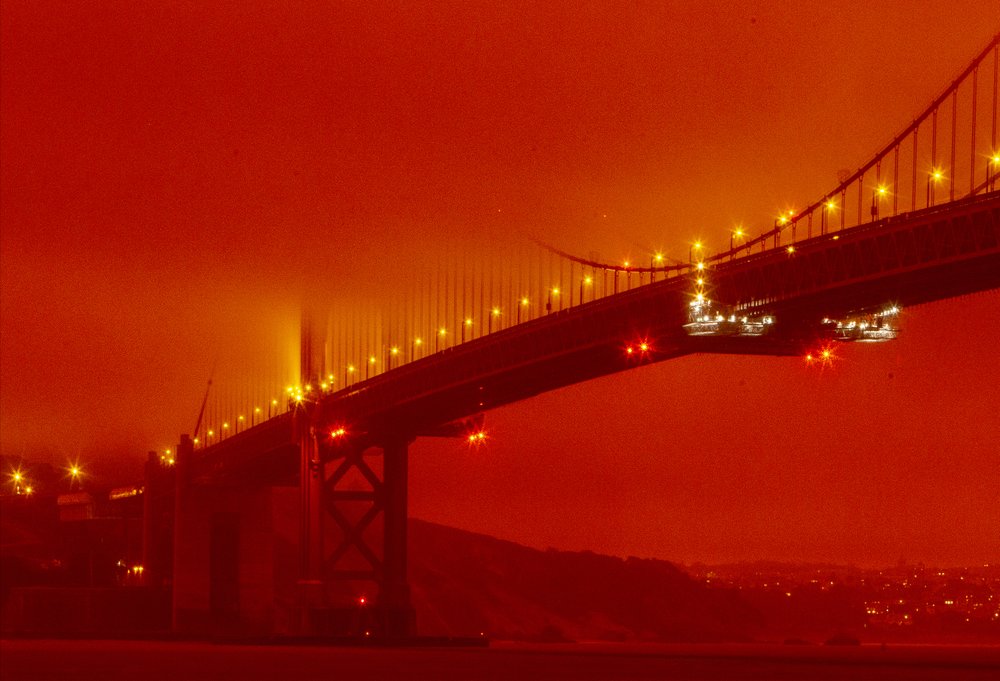 In this photo provided by Frederic Larson, the Golden Gate Bridge is seen at 11 a.m. PT, Wednesday, Sept. 9, 2020, in San Francisco, amid a smoky, orange hue caused by the ongoing wildfires. (Photo: AP)

In Butte County, California, where three people have been killed, firefighters battled the flames through the night, after a day of apocalyptic orange skies over the Golden State.

Another dozen people were reportedly unaccounted for in the area.

One unidentified person was killed in far northern California, near the remote rural community of Happy Camp, a Cal Fire spokeswoman told AFP.

Tina Rose, 29, fled her home in central California after witnessing the mountain in front "glowing red" from looming wildfires.

"We were packing everything and you can hear the propane tanks just exploding... and when we heard the second one we were just like 'we need to go in case it does move faster', because you never know," she told AFP.

"It is something we never want to experience again," she added, speaking from her brother-in-law's crowded home near Fresno.

In the San Francisco area, Wednesday's deep orange sky caused by wildfire smoke gave way to a wintry gray, but cars were still forced to drive with lights on in the gloom.

Heavily polluted air meant schools and daycares were no longer letting children play outside, while seniors and vulnerable individuals were encouraged to stay inside.

But the past days' strong, dry winds eased off across much of the state, with severe weather warnings lifted for most of California. Humidity is expected to rise as temperatures cool through to next week, providing some relief, Cal Fire said. 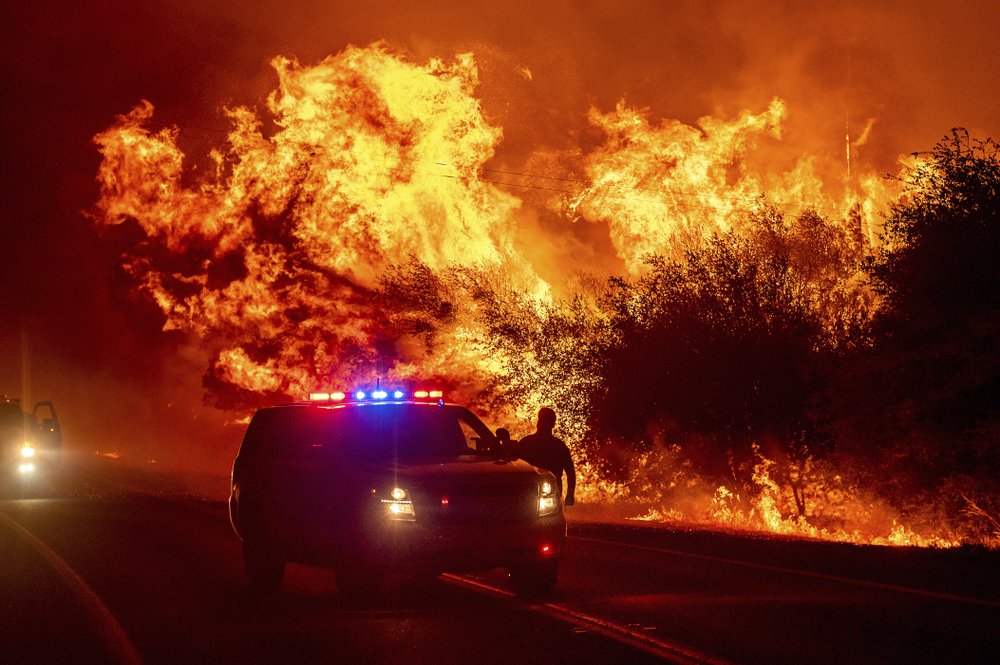 Much of the smoke has blown down from the north, where the Bear Fire exploded at an unprecedented speed this week, combining with older blazes to threaten the town of Oroville.

By Thursday it had covered 250,000 acres and was only 23 percent contained.

Evacuation warnings were expanded to parts of the town of Paradise, the site of California's deadliest modern fire which killed 86 people less than two years ago.

California has seen more than 3.1 million acres burn this year -- an annual record, with nearly four months of fire season still to come.

Governor Gavin Newsom blamed the ferocity of this year's fires on climate change.

He tweeted: "We must do more. We need action at EVERY level. CA cannot do this alone. Climate change is REAL. So please -- VOTE."