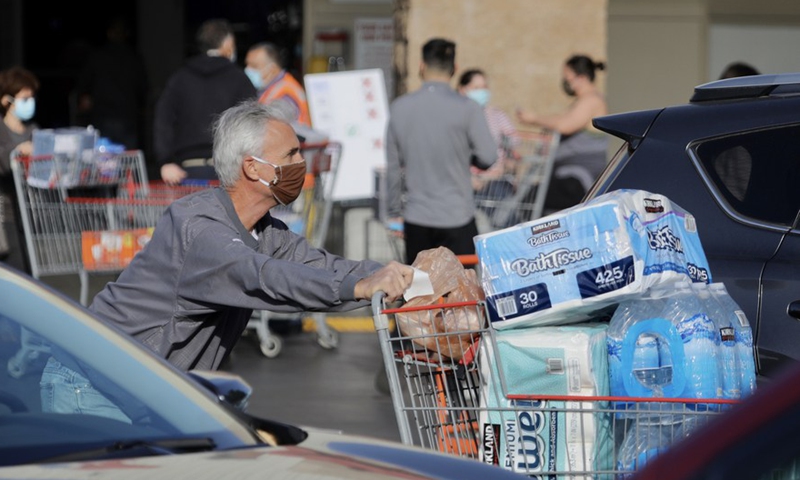 A consumer pushes a shopping cart at the parking lot of a Costco Warehouse in Los Angeles, the United States, on Nov. 20, 2020. (Photo: Xinhua)

The California Department of Public Health confirmed 39,070 new COVID-19 infections and 351 additional deaths in a daily release, pushing its cumulative cases up to 2,003,146, with 23,635 related deaths in the most populous U.S. state.

The state, home to around 40 million residents, hit the latest bleak milestone just six weeks after surpassing the 1 million mark.

California governor Gavin Newsom called it "a sobering news, a sobering reality, on Christmas eve" in a video posted on the Twitter page of his office.

"351 lives lost yesterday -- our hearts are with those families," the governor lamented.

"To our health care heroes -- we see you. You matter," he tweeted.

"There is nothing more courageous than the work you do," added the governor.

As of Thursday afternoon, the United States remains the nation hardest hit by the pandemic, with a total of 18.6 million COVID-19 cases and roughly 329,000 relevant deaths reported nationwide, showed a tally by Johns Hopkins University.

Meanwhile, the remaining ICU capacity in the 11-county Southern California region and 12-county San Joaquin Valley region in Central California are still zero. The two regions are home to around 33 million people in the state, representing 84 percent of the state's population.

Based on current ICU data, San Joaquin Valley, Southern California, Greater Sacramento and the Bay Area are under the regional stay-at-home order. Regions must remain lockdown for at least three weeks and will be eligible to exit the order only if ICU capacity projections for the following month are above or equal to 15 percent, according to the state's authorities.

"Today California hit a sobering milestone, we have surpassed 2 million COVID-19 cases. While this means we are leveraging our testing capacity, it is a reminder that this virus continues to spread through our communities," said Mark Ghaly, Secretary of California's Health and Human Services Agency in the release.

"Hospitals are full, ICU beds are few, people are dying. The simplest thing we can do, but also the most significant, is to stay home. We are the first line of defense against this virus and we must act now," Ghaly added.