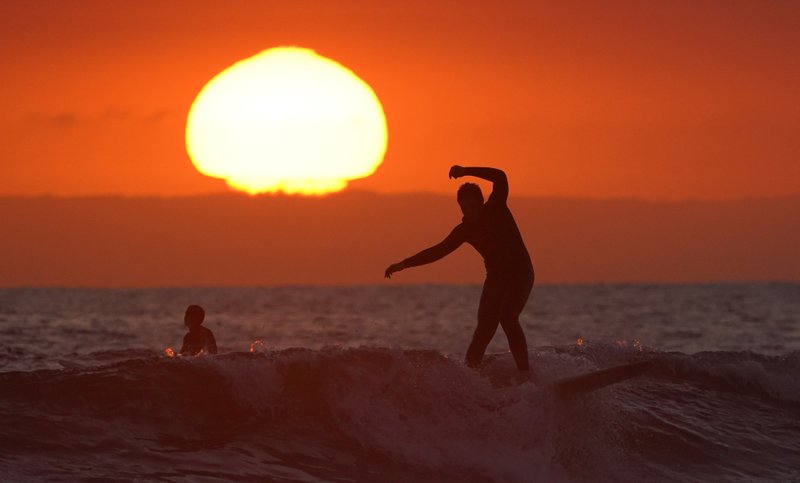 A surfer rides a wave as the sun goes down Thursday, April 30, 2020, in Newport Beach, Calif. The beach is one of the beaches kept open during the coronavirus outbreak. While some communities in Orange County have closed beaches, Huntington Beach and Newport Beach refused to limit access. (Photo: AP)

A rural California county allowed nonessential businesses to reopen and diners to eat in restaurants on Friday, becoming the first to defy Gov. Gavin Newsom’s statewide orders barring such moves during the coronavirus pandemic.

Modoc County is “moving forward with our reopening plan,” Modoc County Deputy Director of Emergency Services Heather Hadwick said in an email to The Associated Press.

She said the county of about 9,000 people in the state’s far northeast corner near Oregon had no COVID-19 cases.

Hadwick said the county had not heard back from the governor about its reopening plan, but she asserted it aligns with Newsom’s indicators for reopening. Schools were not opening Friday, but it was an option for districts that can accommodate preventative measures, she said

“We are utilizing his guidance of those plans and we have zero cases,” she wrote. “Our residents were moving forward with or without us. We really needed to create guidelines for them so that they could do this in the safest way possible.”

At Country Hearth Restaurant and Bakery in the small town of Cedarville, three customers came in for breakfast, said Janet Irene, who has run the small eatery for 35 years. Irene said her regular customers had been very cooperative with orders that had allowed her to only serve takeout since late March, even during bad weather.

She said it was a confusing situation and she remained concerned that the county did not have the governor’s stamp of approval, but she was following the latest guidance from her local government.

“I was kind of torn between what was right and what was wrong, but the law is what the law is and you just don’t do any different,” she said. “I’m just hoping that they’re able to get together.”

Newsom did not say during his daily briefing Thursday whether he would intervene in Modoc County as he did in Southern California by ordering the shutdown of all beaches in Orange County.

A “hard close” order took effect on Friday for seashores from wealthy Newport Beach to artsy Laguna Beach and down Doheny way. Compliance was another matter, however.

It was a typical morning in Huntington Beach as surfers toted boards across the city’s beach and bobbed in waves offshore. Other people strolled, walked dogs, biked and jogged on a path through a park overlooking the shoreline. Most were not wearing masks.

Beach parking lots were closed and authorities were expected to patrol the beach. They planned to educate and seek voluntary compliance, but if necessary they will issue citations, Officer Angela Bennett said.

Down the coast at Huntington State Beach, park officers wearing masks stood by official vehicles with blinking lights, telling passers-by about the closure. Yellow tape blocked off a parking lot and a sign said “No entry.”

The Orange County beach closures followed a weekend when tens of thousands of people hit the sands south of Los Angeles County, where beaches have been closed for weeks. Newsom scolded people for defying the spirit of his statewide stay-at-home order, designed to slow the spread of the coronavirus that has killed some 2,000 people in the state.

“People that are congregating there, that weren’t practicing physical distancing ... may not even know that they contracted the disease and now they put other people at risk,” Newsom said.

He said he hoped it would be “a very short-term adjustment,” although the directive had no termination date.

Newsom, a Democrat, has engendered strong bipartisan support for most of his actions during the virus outbreak. But more recently, some of the more rural and GOP-leaning areas of the state have begun chafing against what they see as an overly cautious move toward reopening California, which has seen its 40 million people cloistered and its economy hemorrhage jobs because of mandated business closures.

Newsom’s beach order was condemned as punitive, political overreach by some Republican lawmakers, especially those in Orange County, where the GOP hopes to regain ground lost to Democrats in what was once a Republican stronghold.

“At a time when California is granting early release to high-risk sex offenders and other dangerous inmates due to COVID-19 concerns, the implicit threat to punish beachgoers and surfers who violate the order is absurd,” state Sen. Patricia Bates, a Laguna Niguel Republican, said in a statement.

Elected officials in beach communities such as San Clemente argued that they are well aware of the need to contain the virus and are succeeding in reducing the threat countywide through safe practices.

Orange County is home to more than 3 million people. The county’s Health Care Agency on Thursday reported an additional 145 COVID-19 cases, bringing the total to around 2,400 with 45 deaths.

Orange County Sheriff Don Barnes said he would focus on cautioning and educating people that they must practice social distancing rather than citing them for violating the state order.

“I have no desire to enforce any aspect of that through arrest,” he said.