WORLD California giving $116 million to people who get virus shots

California giving $116 million to people who get virus shots

California is giving away the country's largest pot of vaccine prize money — $116.5 million — in an attempt to get millions more inoculated before the most populous state fully reopens next month. 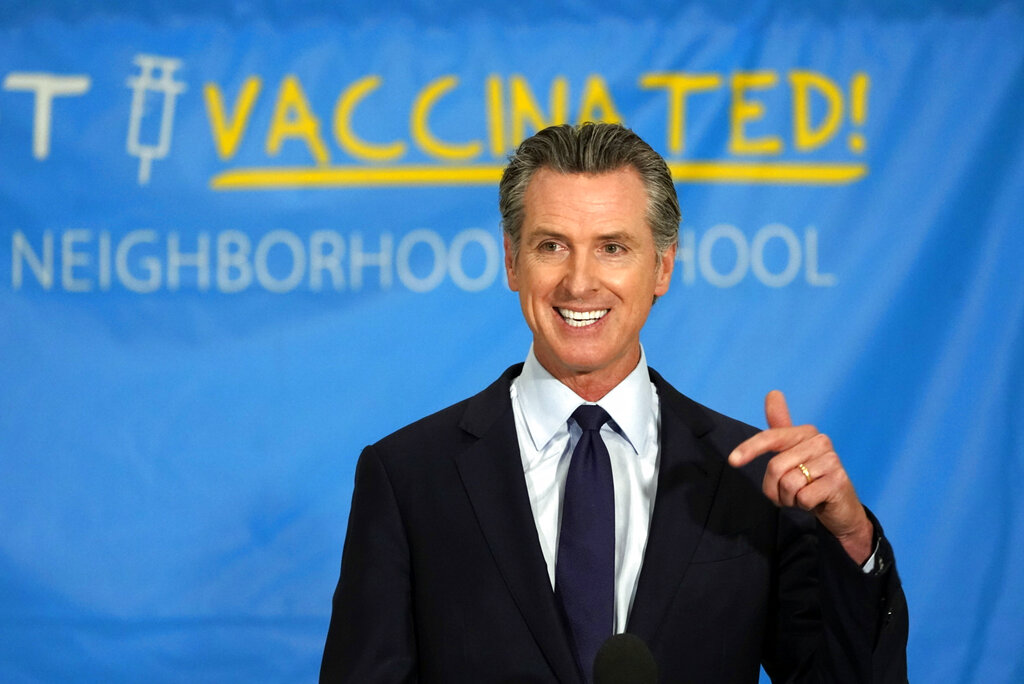 California Gov. Gavin Newsom announces a massive jackpot as the nation's most populous state looks to encourage millions of people who are still unvaccinated to get their shots at a news conference at the Esteban E. Torres High School in Los Angeles, Thursday, May 27, 2021. (Photo: AP)

Gov. Gavin Newsom on Thursday announced the prizes, which include $1.5 million each for 10 Californians, the largest single award offered in any state.

The goal is to motivate roughly 12 million people who are eligible but not yet vaccinated, though the more than 20 million Californians already partially or fully vaccinated also are in the running for the most valuable prizes.

“We're putting aside more resources than any other state in America, and we’re making available the largest prizes of any state in America for those that seek to get vaccinated," Newsom announced at an East Los Angeles high school where people were being vaccinated in the gymnasium.

The state will give $50 gift cards either for general use or for specific grocery stores to the next 2 million people who get shots, including those at the school where Newsom spoke.

Newsom, a freshman Democrat facing a likely recall election in the fall, defended the spending as smart policy aimed at ensuring more than 70% of eligible people are inoculated before the state fully reopens businesses and relaxes social distancing and masking rules on June 15.

On that day, a drawing will be held to award 10 vaccinated people the top prize. Another 30 people will win $50,000 each, with those drawings starting June 4.

Anyone 12 and older who has received at least one shot will be eligible. The state will use its immunization database to automatically enter people into the drawings, though it's still exploring how to include those vaccinated at federal facilities, such as veterans hospitals.

Newsom said he hopes to give out all the gift cards by June 15, which would mean 2 million more people are vaccinated.

Money for the prizes will come from the state’s disaster response account, which will be reimbursed by federal coronavirus relief money, said Amelia Matier, a Newsom spokeswoman.

When asked if the expense is worth it, the governor replied that the “cost of not getting vaccinated is exponentially, incalculably higher."

About 63% of the 34 million Californians 12 and older have gotten shots, though the pace has slowed as infection rates have plummeted to record lows. The number of people getting their first shots dropped notably in the past week, and the state is trying to not go off a cliff in the next week or two, Newsom said.

Ohio this week announced the first $1 million winner of its “Vax-a-Million” contest, as well as the first child to win a full college scholarship. The number of people signing up for shots jumped after Republican Gov. Mike DeWine announced the lottery, though it was still lower than earlier in the pandemic. Colorado and Oregon also offered $1 million prizes.

New York is raffling 50 full scholarships to children 12 to 17 to public universities and colleges in the state, selecting 10 winners each of the next five Wednesdays.

That California is turning to cash prizes to encourage vaccinations marks a major turnaround from earlier this year, when residents clamored for shots. Some drove or waited in line for hours, and others found ways to get into line when they weren't eligible.

State Sen. Richard Pan, a doctor and staunch advocate for vaccines, said it makes sense that demand dropped off after early adopters eager to get the vaccine had their chance. While some Californians will never get the shot, many hung back to see the effect, and others simply didn't consider the shot a priority, he said.

With Memorial Day coming and the state's reopening about two weeks later, it's a “good time to incentivize people," Pan said.

Republican John Cox, who is running for governor, again accused Newsom of buying votes. The governor has been doling out slices of a record $76 billion state budget surplus this month, including cash payments to low- and middle-income Californians.

“This is 100 million more reasons that Gavin Newsom must be recalled," he said, referencing the amount the state will give out in gift cards.

But Rob Stutzman, who served as a spokesman for former Republican Gov. Arnold Schwarzenegger, called it smart policy.

“I hope Republicans resist being critical of this," he tweeted, noting it was Ohio's GOP governor who first came up with the idea.

Newsom’s office said the program would be aimed at reaching people in communities hardest hit by the pandemic — mainly low-income, Black and Latino people — but it wasn't clear if the state is pursuing any new initiatives to vaccinate those populations.

Surveys have shown unvaccinated Latinos are twice as likely as whites to want a vaccine but may be unable to get time off work, live far from a vaccination site, or fear they’ll be charged for a shot, she said.

“These types of strategies don't work in sometimes our lower-income, minority populations where we intend them to work if we don't at the same time lower those barriers — whether it's digital or transportation or language," Bibbins-Domingo said. “We’re at a point in the pandemic where access should not be the issue."

Newsom pointed to a “Get Out the Vaccine" program the state is running with 70 community-based organizations. It features about 2,000 workers in vulnerable communities, encouraging their peers to make a plan to get vaccinated. Those workers will now share details of the prize money, he said.

California uses a “vaccine equity metric” to track vaccination progress that splits zip codes into four groups from least to most healthy, based on a number of factors. Nearly half of people in the least advantaged neighborhoods still haven’t been vaccinated, according to the state.

By contrast, less than a quarter of people in the most advantaged areas haven’t been vaccinated.

Among all Latinos, 57% are not yet vaccinated. That’s the highest percentage of any racial or ethnic group. State figures show 40% of white Californians are not vaccinated.