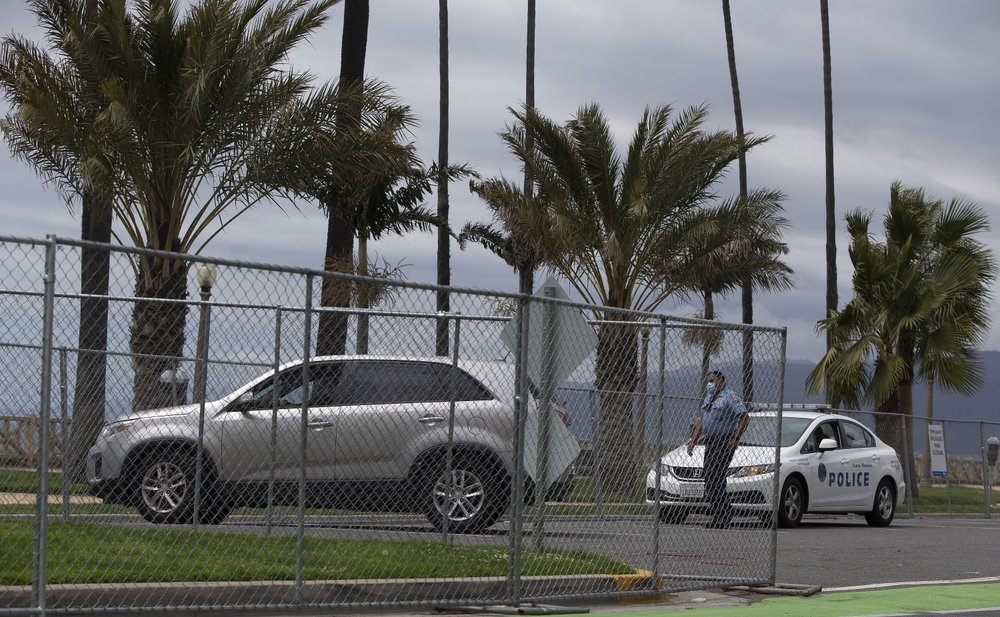 A Santa Monica Police officer asks a parked vehicle to drive off from the closed park and parking lot on Ocean Ave., in Santa Monica, Calif., Monday, April 13, 2020. (Photo: AP)

California Gov. Gavin Newsom on Tuesday unveiled an outline for what it will take to lift coronavirus restrictions in the nation’s most populous state, asking more questions than answering them as he seeks to temper the expectations of a restless, isolating public.

Newsom said he won’t loosen the state’s mandatory, stay-at-home order until hospitalizations, particularly those in intensive care units, “flatten and start to decline.” And he says the state will need more testing, treatments and the ability for businesses, schools and childcare facilities to continue the physical distancing that has come to dominate public life.

But he cautioned that when things reopen, they won’t be the same. Restaurants will have fewer tables and waiters will wear gloves and masks. Thermometers will be common in public spaces, as will masks and other protective gear. Schools could stagger arrival times of students to enforce physical distancing.

And large gatherings — like sporting events, concerts and fairs — are “not in the cards,” he said.

“This is not about going back to where we were before. It’s about going forward in ways that are healthy for all of us. But it won’t look the same,” said Dr. Sonia Angell, director of the California Department of Public Health.

Newsom announced that ICU hospitalizations were mostly flat, declining 0.1% on Monday. But the state reported 71 deaths, the highest single day total since the outbreak began.

California has been under a mandatory, stay-at-home order since March 19. But the virus has been disrupting the state since January, when people from all over the world were first sent to quarantine at California military bases.

In February, California had the first confirmed case in the country of someone who had not traveled internationally or been in contact with someone who had, an unofficial announcement that the outbreak had reached U.S. soil.

For most people, the virus causes mild or moderate symptoms, such as fever and cough that clear up in two to three weeks. For some, especially older adults and people with existing health problems, it can cause more severe illness, including pneumonia and death.

Since then, more than 2 million Californians have filed for unemployment insurance. State officials have delayed tax deadlines, mortgage payments and evictions as they try to slow the economic carnage wrought by unprecedented disruptions in modern life.