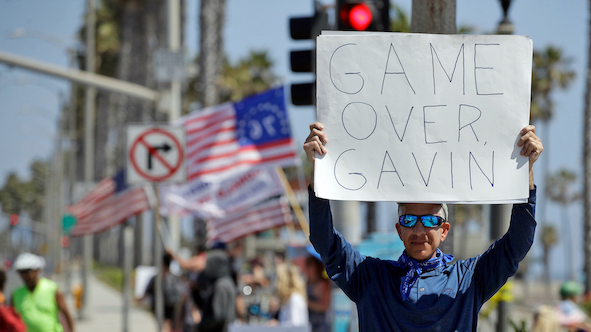 A protester holds a sign in front of the pier in Huntington Beach, California, May 3, 2020.  (Photo: AP)

California Governor Gavin Newsom reiterated Friday that the state is not ready to reopen due to concerns of a second coronavirus wave despite a flattened curve as a result of strict shelter-in-place measures.

California remains largely shut down as other states begin to reopen businesses and allow gatherings. Newsom issued a stay-at-home order on March 19, in place until further notice. On April 30, he ordered beaches in Orange County closed after tens of thousands people flocked there during the weekend.

Newsom's decision goes against U.S. President Donald Trump who incited Americans on Twitter to "liberate" the U.S. In an interview with TIME magazine, Newsom said he fears "fatigue" would soon set in and people would put their guards down.

"All the progress that's been made over the course of the last 90 days can be thrown out in the matter of weeks," said the governor.

Such a lockdown was at the expense of economic growth. Many residents, particularly in GOP-leaning and rural areas, are pushing for reopening as the unemployed and businesses are struggling to survive.

Newsom acknowledged the huge impact COVID-19 brought to local businesses. He said the state was in a "pandemic-induced recession" earlier, but insisted it would be "arbitrary" to set a timeline for reopening at this point.

"I am deeply connected to the stress and anxiety our small business men and women have, and people that desperately need to go back to work," he told TIME. "At the same time, we've got to keep people healthy. And the best way to go back to work is to tame this, to suppress the spread."

California earlier outlined six steps that must be met in order to gradually return to normalcy, which include increased testing, expanded hospital capacity and support of physical distancing among businesses, schools and child care facilities.