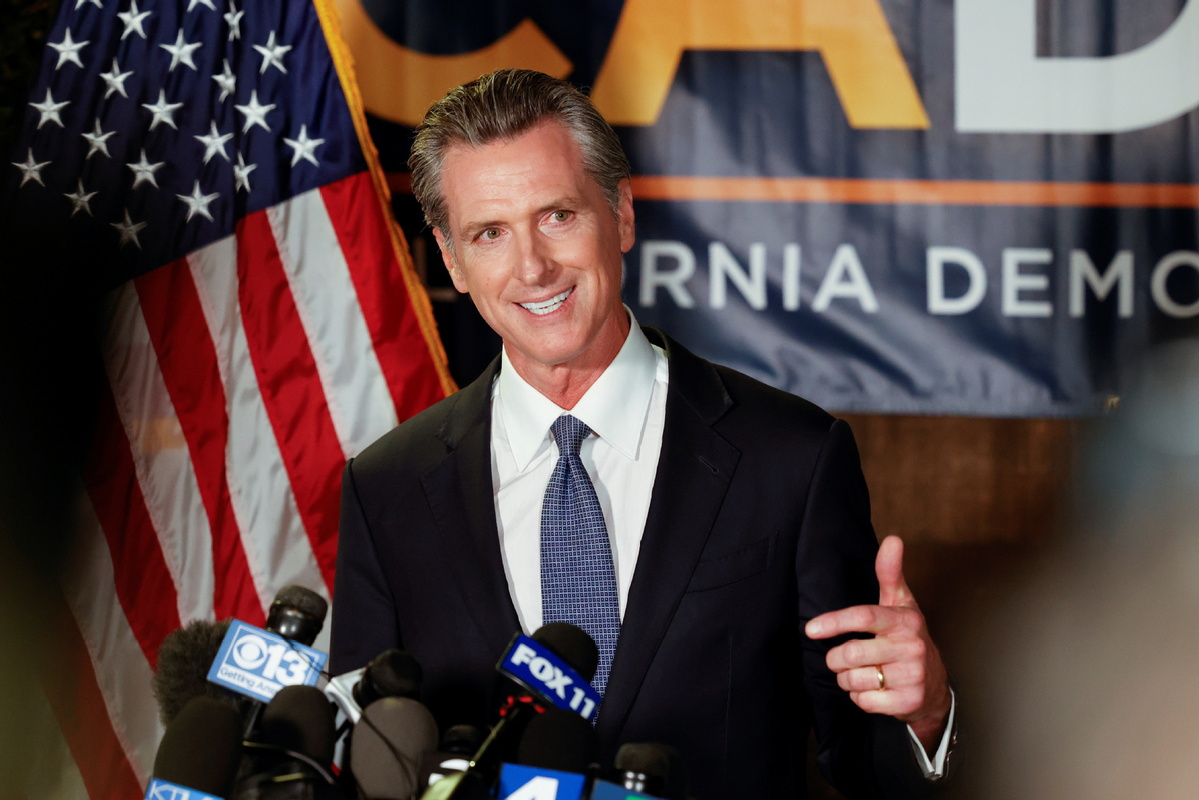 California Governor Gavin Newsom speaks after the polls close on the recall election, at the California Democratic Party headquarters in Sacramento, California, US, Sept 14, 2021. (Photo: Agencies)

LOS ANGELES - Governor Gavin Newsom of the US state of California, a Democrat, has defeated the effort to remove him from office in the gubernatorial recall election that garnered national attention, US media reported Tuesday night.

With more than 60 percent of the votes tallied, the "No" side of the recall was leading by roughly a 2-1 margin, according to ABC.

Newsom, elected California governor in November 2018 with over 61 percent of the vote, is the second governor in the state's history to face a recall election. He is the state's former lieutenant governor and has served as mayor of San Francisco.

In the other recall election in the state's history, Californians voted overwhelmingly to recall Democratic Governor Gray Davis and replace him with Republican Arnold Schwarzenegger in 2003.

The Republican-led effort to oust Newsom gained steam after criticism of the Democratic governor's handling of the COVID-19 pandemic. A total of 46 challengers were potential candidates to replace the governor if he loses the recall election.

The recall ballot requires a yes or no answer: Shall Gavin Newsom be recalled from the office of governor? If a majority of the votes on the recall question are "Yes", Newsom shall be removed from office and the replacement candidate receiving the highest number of votes shall be declared elected for the remainder of the governor's term of office, ending Jan 2, 2023.

"Tonight, California voted NO on the recall and YES to ... Science. Women's rights. Immigrant rights. The minimum wage. The environment. Our future," tweeted Newsom Tuesday night.

"We rejected cynicism and bigotry and chose hope and progress. Thank you, California," the governor added.

US President Joe Biden and some other high-profile Democrats joined Newsom's campaign before the recall election.

During an address at Long Beach City College in Los Angeles County on Monday night, Biden said Newsom "has had the courage to lead, stand up for science" and "for the very thing he's been one of the leading governors in the nation, protecting his people and vaccinating his state".

"The results of the race in which Newsom needs a majority vote to hold his job are likely to influence the 2022 midterms, when control of Congress again will be in play and the party that controls the White House historically loses seats," said a report published on The Sacramento Bee, a major newspaper published in Sacramento, capital of the state of California.

"They could determine how prominently Democrats campaign on COVID-19 restrictions that many Republicans have decried as unnecessary and overly burdensome," said the report.

"National Democrats hope the race can be a model for next year's midterm elections, since Democrats have typically had a hard time motivating their voters in non-presidential races," NBC noted in a report.