WORLD California highway to stay shut another week after mudslides

California highway to stay shut another week after mudslides 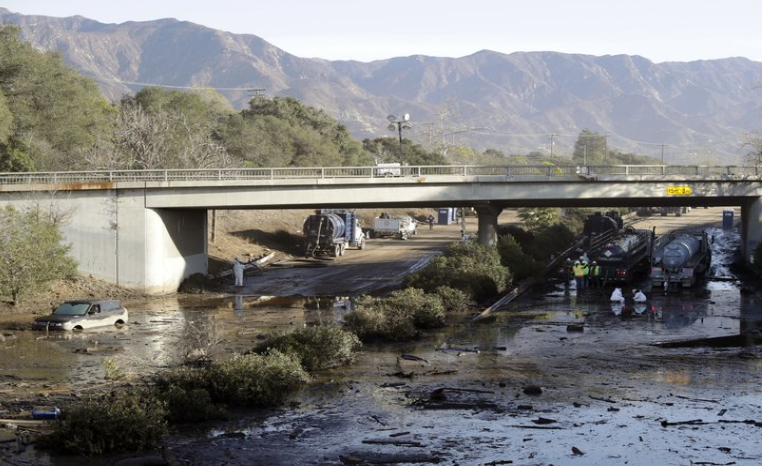 Crews working around the clock cleared boulders, trees and crushed cars from all lanes of U.S. 101, but California officials said Monday the key coastal highway would remain closed for another week after being inundated during mudslides that killed 20 people.

Much of the water on the highway near the devastated town of Montecito had receded, allowing workers to use bulldozers and other heavy equipment to push away solid debris that was still several feet deep.

“It is not until you can see the damage with your own eyes that you can come to understand the magnitude of the incident, the response that is necessary, but most importantly the impact to the citizens and families of Santa Barbara County,” said Jim Shivers, a spokesman for the California Department of Transportation.

The number of people missing in the mudslides was cut to three Monday after a 53-year-old man was found safe.  John “Jack” Keating was located in Ventura with his dog Tiny, Santa Barbara County sheriff’s spokeswoman Kelly Hoover said.

Keating, a transient, was not in the flood zone during the storm, as was feared, she said.

Officials were aiming to reopen U.S. 101 on Jan. 22, nearly two weeks after it was shut down when lanes became a river of muck, Shivers said.

The mudslides were triggered Jan. 9 by a powerful storm that swept in from the Pacific and dumped a deluge on mountain slopes that had been burned bare by a huge wildfire in December.

Search and rescue operations ended over the weekend, and authorities transitioned to recovery. The move allows officials to release resources that were no longer needed and slow the search to a safer pace, Santa Barbara County Sheriff Bill Brown said.

At least 65 homes were destroyed and more than 460 others were damaged. The name of each victim was read aloud during a vigil Sunday night attended by thousands of people.

“We all know someone who has been affected by this,” said Bethany Harris, who brought her two young sons to mourn. “We will heal together.”

Crews have made it a priority to clear debris basins and creek canals before another rainstorm hits the area.

Long-range forecasts gave the crews less than a week before the next chance of rain — and potential new mudslides — although the precipitation was expected to be light. Another storm system could move in a few days later.

With U.S. 101 shut down, Amtrak added additional cars to its route between Santa Barbara and points east as travelers increasingly relied on rail service to get around the closure.

With many surface streets also impassable, the only other ground route into the Los Angeles area — located 90 miles (145 kilometers) down the coast — was a series of smaller mountain highways that add more than three hours to the trip.