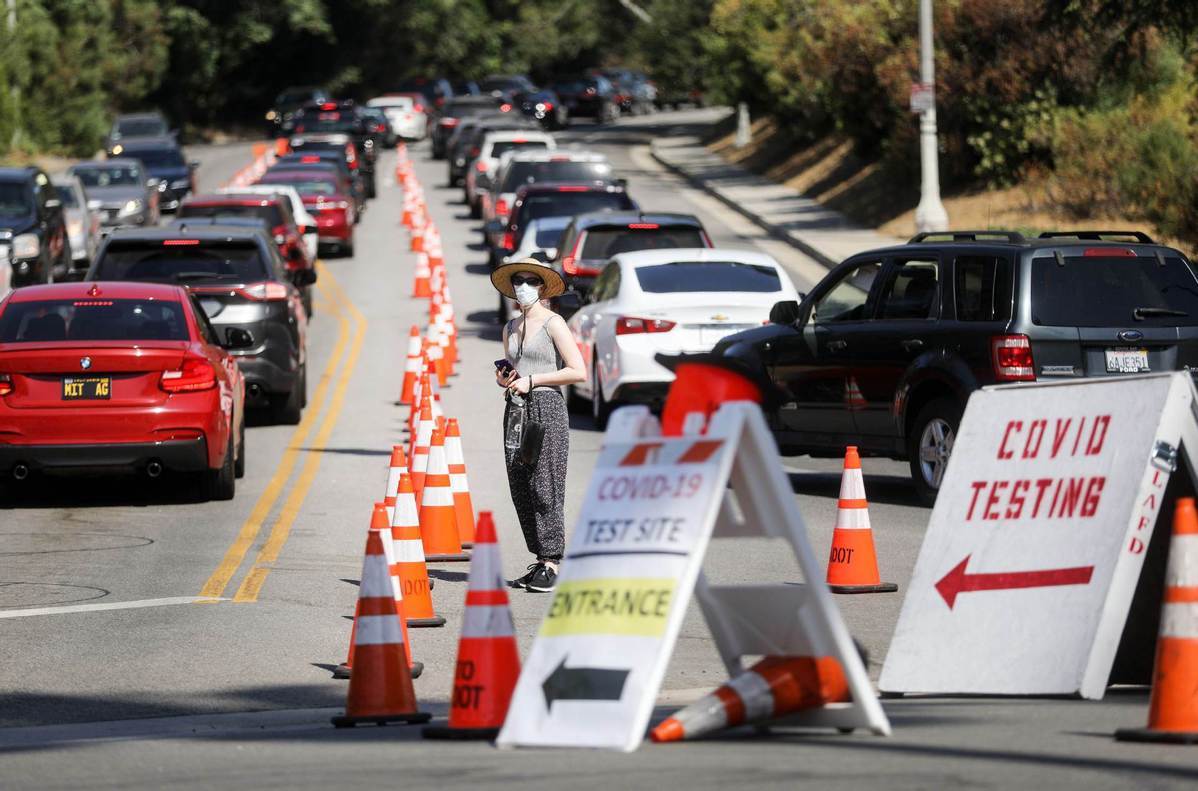 A woman wearing a face mask stands near people in cars lined up to be tested for COVID-19 as they make their way to a parking lot at Dodger Stadium amid the coronavirus pandemic on June 26, 2020 in Los Angeles, California. [Photo/Agencies]

Since early March, when the coronavirus pandemic's impact was first felt in the US, Julie Tang has been pushing a movement to persuade people to wear masks for their safety and to counter anti-Asian racism.

The mandate was a result of the record-high day of new coronavirus infections — 4,084 on June 18. The state on Monday blew past its previous record, by reporting 6,367 new cases in one day, according to the California Department of Public Health.

As Tang and other supporters applaud the mask mandate, the pushback against masks seems to have increased in recent weeks.

Orange County Chief Health Officer Nichole Quick received threats over her May 22 order requiring people to wear masks in public. The county sheriff said he would not enforce Quick's order. Under pressure from both county supervisors and the public, Quick resigned on June 8, and Orange County reversed her mask order.

Almost two weeks since Newsom announced the mask order, he said on Tuesday that the state will focus more on enforcing the order. He also said he would withhold $2.5 billion in the upcoming state budget to penalize counties that fail to comply with state mandates on wearing masks and other measures meant to slow the spread of the virus.

But Tang, also a civil rights activist, is concerned that it will be difficult to regulate as the police who are entrusted to enforce this regulation are losing credibility with the community.

"I think we will basically just rely on the community to cooperate. I hope people do not police others. It will create fights. We will all have to act to restrain ourselves or remove ourselves from any dangerous situation."

Recalling her three months advocating masks, Tang said she faced resistance in her campaign, even among Asians. "They feared reprisals and further stigmatization by the mainstream for promoting masks on their Facebook accounts," said Tang, whose Facebook profile picture shows her in a mask with the words "Fight The Virus, Not Asians".

"Americans' resistance against wearing masks is a cultural phenomenon. It is seen as un-American. And some just don't like being told what to do," she said.

From the onset of the pandemic, wearing masks has been controversial in the US.

Nebraska Governor Pete Ricketts, a Republican who has generally supported public mask wearing, told local governments in his state not to mandate that "customers" wear masks in courthouses and other local administrative offices or else they will lose their allocation of federal funding to fight COVID-19.

In North Carolina, after Democratic Governor Roy Cooper said he was considering making masks mandatory in public spaces, a group called Reopen NC posted videos and graphics on social media instructing people to "remove your submission muzzle because you are not a sheep".

Despite public health officials' emphasis on the importance of face coverings to reduce the transmission of the virus, some protests over mask mandates have turned violent in the last month.

A security guard at a Family Dollar store in Flint, Michigan, was shot dead by a customer whose family was told they needed to wear masks to enter the store. The city of Stillwater, Oklahoma, amended its mask requirement within a day of issuing it after residents threatened violence.

Those people were emboldened by "a president who initially played down the pandemic and now refuses to wear a mask", said Jonathan Fielding, former director of the Los Angeles County Department of Public Health and a professor at UCLA's Fielding School of Public Health.

"People are saying, 'Our president's not doing this, why do I have to?' That's one of the roots of this problem — the radicalization of views on individual rights," Fielding told news site CalMatters.

It was a "big mistake in the US" that people weren't wearing masks, said Gao Fu, director of China's Center for Disease Control and Prevention, in a March 27 article in Science Magazine. "This virus is transmitted by droplets" coming out of the mouth when people speak, so it's particularly important for asymptomatic carriers to wear masks to prevent droplets that carry the virus from escaping and infecting others, he explained.

A study from Cambridge and Greenwich universities in the UK also found that cloth masks, "even homemade masks with limited effectiveness can dramatically reduce transmission rates if worn by enough people, regardless of whether they show symptoms".

Adams later reversed course and began promoting masks. But Trump still refuses to wear a mask. His press secretary, Kayleigh McEnany, recently told reporters that wearing a mask was a "personal decision" and that "it's safe for me not to be wearing a mask".

"For many — and in our president's case — the resistance to wearing a mask is engendered by a white superiority complex to Asians," said Tang. "The concept of 'exceptionalism' is embedded in many Americans' minds, the idea that Americans are exceptional and better, and therefore we are immune and don't need anything to protect us.

"Our politicians certainly pushed that image and created this dangerous myth," she said. "It also creates hubris, and a false sense of invincibility, that could have deadly consequences."