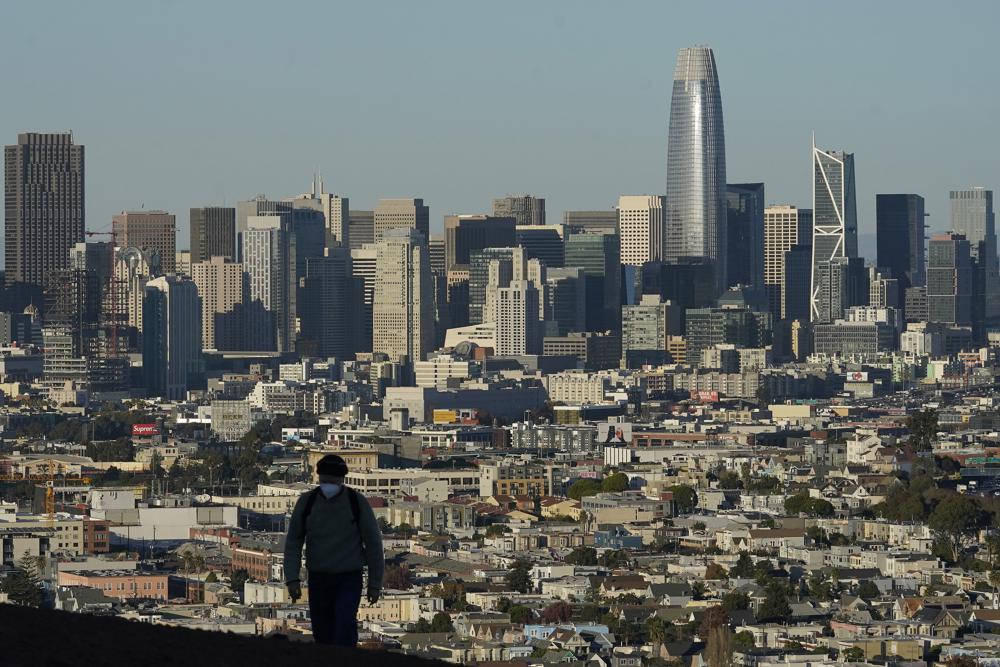 A person wearing a protective mask walks in front of the skyline on Bernal Heights Hill during the coronavirus pandemic in San Francisco. (File photo: AP)

California’s population fell by more than 182,000 last year, the first yearly loss ever recorded for the nation’s most populous state that halted a growth streak dating to its founding in 1850 on the heels of a gold rush that prompted a flood of people to seek their fortune in the West.

The figures released Friday followed last week's announcement from the U.S. Census Bureau that California would lose a congressional seat for the first time because it grew more slowly than other states over the past decade. Still, California's population of just under 39.5 million and soon-to-be 52-member congressional delegation remain by far the largest.

California's population has surged and slowed in the decades since its founding, with notable increases following World War II and the tech boom of the 1980s and '90s that put Silicon Valley on the map.

In recent years, more people have left California for other states than have moved there, a trend Republicans say is a result of the state's high taxes and progressive politics. The average sale price of a single-family home in California hit a record $758,990 in March, a 23.9% increase from a year ago.

“The numbers don't lie. People are leaving our state because it's not affordable to live here,” tweeted Kevin Faulconer, the former mayor of San Diego and one of the Republican candidates hoping to unseat Democratic Gov. Gavin Newsom in this year's expected recall election.

But the Newsom administration says California's population decline is an outlier, blaming it on the coronavirus pandemic that turned everything upside down in 2020.

California has been steadily losing people to other states for years. From 2010 to 2020, about 6.1 million people left for other states and only 4.9 million arrived from other parts of the country, according to an analysis of census data by the Public Policy Institute of California.

But the influx of international immigrants and births outpacing deaths have always been enough to overcome that loss. That changed in 2020.

In a normal year, California might have between 140,000 and 150,000 people move in from other countries. In 2020, it was just 29,000 people — a direct impact, state officials say, of the Trump administration halting new visas for much of the year.

Global lockdowns because of the coronavirus prompted a 29% decline in international students coming to California, or about 53,000 people.

Births continued their steady decline, mirroring a national trend. But deaths soared as the coronavirus killed 51,000 people in California last year, accounting for a 19% increase of the state's death rate compared to the previous three-year average.

“If it were not for the pandemic last year, we might be having a very different conversation today,” said Walter Schwarm, California’s chief demographer.

The deaths were more pronounced in the state's most populated cities, including Los Angeles, which saw a 27% increase over its three-year average. Overall, Los Angeles lost nearly 52,000 people, the third straight year of decline that has put its population at just over 3.9 million.

Eric McGhee, a senior fellow at the Public Policy Institute of California, said the state's population decline is “largely a function of the pandemic.” He says the state will likely return to its trend of slow growth this year as things return to normal.

But he said the underlying issues causing that slow growth will remain, including a housing shortage that is driving prices to an all time high. A recent PPIC analysis of census data showed people moving to California make more money and had higher education levels than people who moved out.

“The thing that policy makers have the most control over probably is creating an environment where life is affordable,” he said.

The state's population estimate comes from a number of sources, including birth and death counts, the number of new driver's licenses and address changes, school enrollments and federal tax returns.