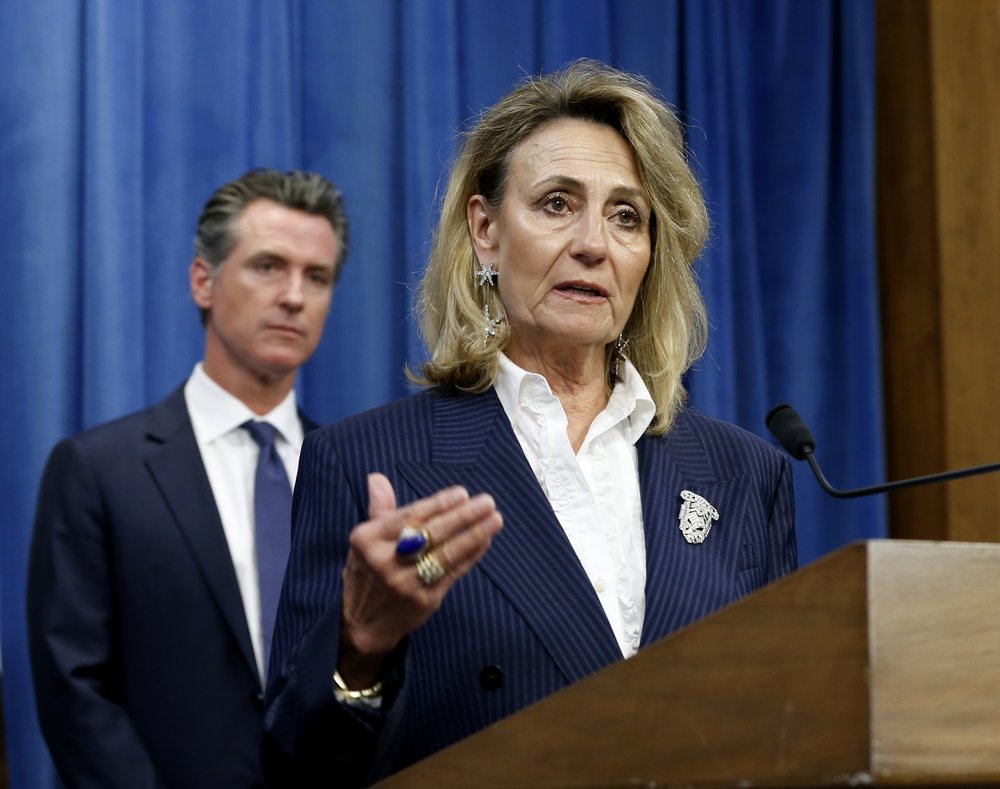 In this July 23, 2019, file photo, Marybel Batjer, of the California Public Utilities Commission, speaks during a news conference as Gov. Gavin Newsom looks on in Sacramento, Calif. California's utility regulator is issuing a series of sanctions against Pacific Gas and Electric for what it calls "failures in execution" during the largest planned power shut-off in state history to avoid wildfires. (Photo: AP)

California’s top utility regulator blasted Pacific Gas and Electric on Monday for what she called “failures in execution” during the largest planned power outage in state history to avoid wildfires that she said, “created an unacceptable situation that should never be repeated.”

The agency ordered a series of corrective actions, including a goal of restoring power within 12 hours, not the utility’s current 48-hour goal.

“The scope, scale, complexity, and overall impact to people’s lives, businesses, and the economy of this action cannot be understated,” California Public Utilities Commission President Marybel Batjer wrote in a letter to PG&amp;E CEO Bill Johnson.

PG&amp;E last week took the unprecedented step of cutting power to more than 700,000 customers, affecting nearly 2 million Californians. The company said it did it because of dangerous wind forecasts but acknowledged that its execution was poor.

Its website frequently crashed, and many people said they did not receive enough warning that the power was going out.

“We were not adequately prepared,” Johnson said at a press conference last week.

PG&amp;E spokespeople did not immediately respond Monday to a request for comment on the sanctions.

In addition to restoring power faster, the PUC said the utility must work harder to avoid such large-scale outages, develop better ways to communicate with the public and local officials, get a better system for distributing outage maps and work with emergency personnel to ensure PG&amp;E staff are sufficiently trained.

She ordered the utility to perform an audit of its performance during the outages that began Wednesday, saying the utility clearly did not adopt many of the recommendations state officials have made since utilities was granted the authority to begin pre-emptive power shutoffs last year. The review is due by Thursday, and she ordered several PG&amp;E executives to appear at an emergency PUC hearing Friday.

Gov. Gavin Newsom has also criticized PG&amp;E for its performance during the outage, blaming what he called decades of mismanagement, underinvestment and lousy communication with the public. On Monday the Democratic governor urged the utility to compensate affected customers with a bill credit or rebate worth $100 for residential customers or $250 for small businesses.

Newsom said the shutoffs affected too many customers for too long, and it is clear PG&amp;E implemented them “with astounding neglect and lack of preparation.”

Johnson, the PG&amp;E CEO, responded in writing to Newsom’s letter Monday, noting that no fires occurred during the power shut-off. He said he welcomes the PUC review.

“We know there are areas where we fell short of our commitment to serving our customers during this unprecedented event, both in our operations and in our customer communications, and we look forward to learning from these agencies how we can improve,” he wrote.

Batjer’s letter also said that PG&amp;E’s service territory, design of its transmission lines and distribution network and “lack of granularity of its forecasting ability” mean it can’t do pre-emptive power shut-offs as strategically as some other utilities, but she said it must work harder to reduce the number of customers affected by future outages.

In a separate filing with the PUC on Monday, Mendocino, Napa and Sonoma counties and the city of Santa Rosa complained about PG&amp;E’s communications with local governments and emergency management agencies ahead of planned outages. For instance, attorneys wrote, the weather forecasting website that it uses to communicate with local agencies and emergency services is inadequate and not aligned with commonly used public emergency standards.

“It appears never to have occurred to the utility to confirm with its local public safety partners that the tool would meet their needs, nor did PG&amp;E show the website to the local governments who had long been asking for situational awareness information before launching the website publicly,” attorneys wrote.