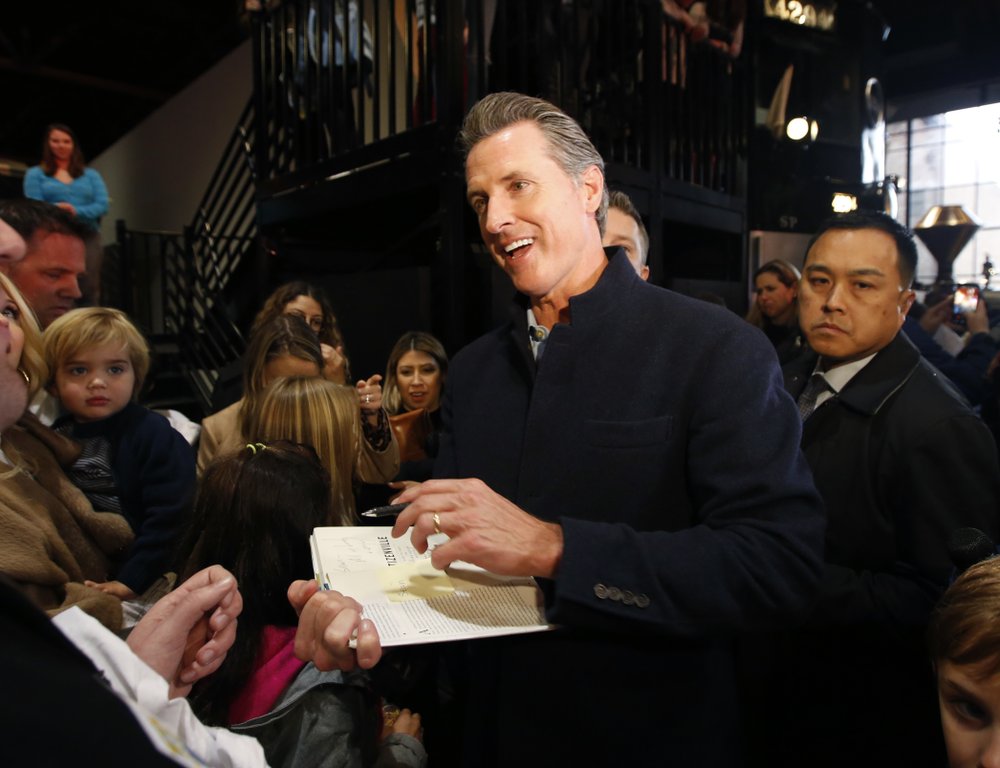 "People's lives, freedom, security, the water we drink, the air we breathe — they all hang in the balance," Newsom plans to say, according to excerpts of his speech released by his office.

Newsom takes the helm as the 40th governor of the nation's most populous state, succeeding fellow Democrat Jerry Brown. He enters the governorship two years into California's self-styled "resistance" to Trump, and appears poised to ramp up the contrast even more.

But even as he needles Trump, Newsom will attempt an overture to the millions of voters in rural California who voted for Trump in 2016 and Newsom's Republican rival last November.

"I recognize that many in our rural communities believe that Sacramento doesn't care about them — doesn't even really see them," he plans to say. "I see you. I care about you. And I will represent you with pride."

His first budget address Thursday will offer a glimpse on how they'll pay for it all, but on Monday he’ll highlight the issues as key aspects of the "California dream" that everyone in the state should be able to achieve.

While Newsom highlighted those goals over and over on the campaign trail, his inaugural offers a chance for the new governor to offer a grand vision for the state he'll lead for the next four years and a chance to distinguish himself from his predecessor, Brown.

It will be the first time since 1887 that California has had consecutive Democratic governors. The handoff reflects Democrats' dominance in California politics — the party holds every statewide office and huge majorities in the Legislature.

The new governor will stay Brown's course in some areas but is likely to push more ambitious and expensive policies related to health care and education. And he'll be "a little more of a flashy governor than Brown," said Eric Schickler, a political science professor at the University of California, Berkeley.

Newsom enters office with a strong economy and nearly $30 billion in reserves left from Brown, although a slowing of the national economy could drastically shift the course of Newsom’s governorship.

For now, though, "he comes in in a pretty enviable spot," Schickler said.

Newsom, 51, is a tailored-suit politician with a mega-watt smile and perfectly coiffed hair. Where Brown kept the media at arm's length, Newsom courts the spotlight.

The generational change he brings to the governor's mansion was reflected in the musical headliners for a wildfire victims benefit concert Newsom hosted on Sunday — hip-hop artists Pitbull and Common. The concert raised $5 million.

Earlier in the day, Newsom and his wife, Jennifer Siebel Newsom, held a family-focused event at the California State Railroad Museum after attending a brunch with high-dollar donors.

Siebel Newsom already has created a change in Sacramento political traditions with her preference for the title "first partner" rather than "first lady", which she said is more inclusive. It's also reflective of her professional experience as an actress and filmmaker focused on gender politics and inequality.

Jerry Hallisey, a San Francisco lawyer and longtime Newsom family friend who helps with fundraising, said he expects Newsom to pull more expertise from the private sector into his administration than Brown did. Newsom launched a winery in 1992 that grew into the PlumpJack Group, a network of wineries and hospitality businesses that made him a millionaire. He's placing his controlling interests into a blind trust to avoid conflicts of interest.

The rest of California's incoming constitutional officers were scheduled for their own inaugurations throughout Monday, including Attorney General Xavier Becerra who also drew a sharp contrast with Trump as he took the oath of office in the morning.