WORLD California seeks compromise on rules for shootings by police

California seeks compromise on rules for shootings by police 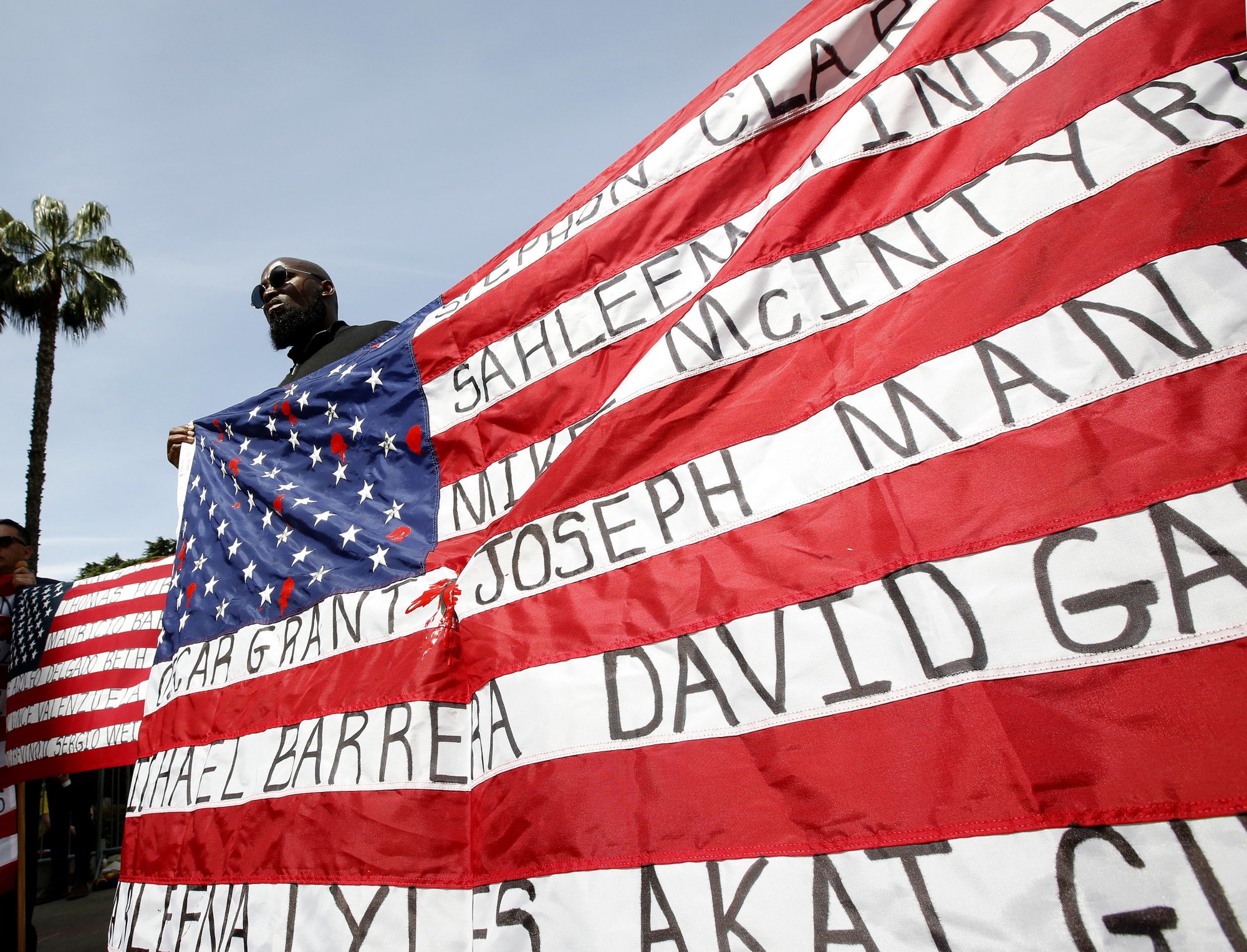 Malaki Seku Amen holds up an American flag with the names of people shot and killed by law enforcement officers, as he joins other in support of a bill that would restrict the use of deadly force by police in Sacramento, Calif. on April 8, 2019. (Photo: AP)

A state Senate committee tied together a police-backed measure requiring more training with a competing proposal allowing police to kill only if they have exhausted non-lethal efforts to resolve or de-escalate a situation. The fatal police shooting of unarmed vandalism suspect Stephon Clark in Sacramento last year inspired the latter.

“To look at these two bills together is a powerful, powerful combination, from my perspective,” said Democratic Sen. Holly Mitchell of Los Angeles.

The move aims to force negotiations between the sides by combining the most progressive elements of each plan. It also may mean no changes will ultimately become law for the second consecutive year, unless the sides can reach agreement on a contentious and highly emotional issue.

“We want to be able to make some change, and it has to be substantive change,” said Democratic Sen. Anna Caballero of Salinas, who is sponsoring the police-backed legislation.

If the reformer-backed portion fails, “then it all disappears,” Caballero said. “And so what this does is it keeps everybody at the table, negotiating in good faith, trying to work towards a solution.”

The police-backed measure would set a national precedent by creating statewide guidelines on when officers can use lethal force and requiring that every officer be trained in ways to avoid opening fire.

As part of the compromise effort, Caballero stripped her proposal of a section to enshrine in law current standards that let officers kill if they reasonably believe they or others are in imminent danger.

Since that standard has been set by the courts, it would remain if no compromise is reached.

“We clearly have ... many, many, many people up and down the state, and experts, who feel that California’s use-of-force standard should be revised,” said Sen. Nancy Skinner, a Democrat from Berkeley who chairs the Senate public safety committee and engineered the surprise development to combine the measures.

She said she hopes the committee’s move will lead to compromise after listening to dozens of opponents of the original police-backed legislation describe their loved ones’ deaths in confrontations with police.

They included Theresa Smith, founder of the Law Enforcement Accountability Network, whose son, Caesar Ray Cruz, was killed by Anaheim police nearly a decade ago. Police were told that the 35-year-old had a gun, and one was found in his vehicle, but he was unarmed when they opened fire in a Walmart parking lot.

“He left behind five boys, who are now having to grow up without their father, not having him there for their birthday or Christmas,” she said, her voice cracking. “Police officers shouldn’t be shooting people if they’re not in imminent danger.”

Democratic Assemblywoman Shirley Weber of San Diego, who proposed the tougher restrictions on police, has not yet sat down with law enforcement negotiators, said her spokesman, Joe Kocurek. He did not immediately comment on the Senate committee’s action.

Law enforcement leaders said the proposal they support incorporates best practices from around the country. It would require officers to provide medical help to injured suspects and to report and stop any excessive force they see used by other officers.

The training includes how to better respond to mental health crises, which Protect California president Robert Harris said account for nearly 25% of all fatal officer-involved shootings. Law enforcement groups formed the nonprofit to promote their alternative to changing the legal standard for using force.

The legislation “will set a national precedent by establishing the most comprehensive legislative solution to one of the most critical issues facing America today,” said Brian Marvel, president of Peace Officers Research Association of California.

Democratic Sen. Steven Bradford of Compton wasn’t persuaded either plan would make much difference. He didn’t vote as the combined measure cleared the committee with bipartisan support.

“We’re dealing with a racist society, and we want to hide behind all these other laws and anything else,” he said. “This is straight about race, and all the training in the world — unless you change your heart and your mind — will not have any effect on how our policing happens in this country.”