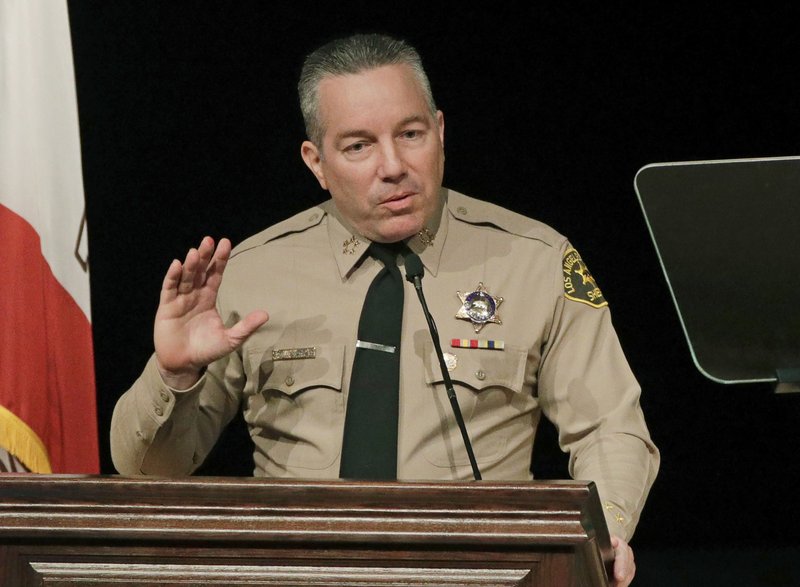 Two groups of inmates at a Los Angeles County jail tried to infect themselves with the coronavirus by sharing water and a mask, and within two weeks 30 prisoners tested positive, authorities said Monday.

The footage captured inmates in one unit sharing a container of hot water and others in a second unit sniffing a mask.

Two of the 30 inmates, one from each unit, were later released from the jail as part of the department’s effort to reduce the prisoner population systemwide, according to Bruce Chase, the department’s assistant sheriff of custody operations.

Villanueva said the inmates used hot water to try to raise their temperatures just before a nurse checked them. An elevated temperature is a symptom for coronavirus.

The sheriff said the inmates mistakenly believed that if they were infected they would be freed.

None of the 30 inmates required critical care when they were sick, though some had moderate symptoms, Chase said. No prisoners within the county’s jail system — the largest in the country — have died from the virus.

Jails and prisons nationwide have become flashpoints in the pandemic. More than 25,000 inmates have been infected and about 350 have died nationwide — from Rikers Island in New York City to federal, state, and local lockups coast to coast, according to an unofficial tally kept by the COVID-19 Behind Bars Data Project run by UCLA Law.

In California, five inmates in a state prison in San Bernardino County have died from COVID-19 complications and outbreaks at federal penitentiaries at Terminal Island in San Pedro and Lompoc are considered among the country’s worst.

Deputies had been reviewing surveillance video trying to see if the inmates were socially distancing and using their masks when “lo and behold, we stumbled across footage that was very troubling to us,” Chase said.

The mid-April video showed a group of inmates passing around a mask and sniffing it. As authorities were investigating that incident, they found out about a second case where inmates were sipping from the same container of water in late April.

Within two weeks, 21 inmates in the water container case had COVID-19 and nine prisoners from the mask incident were sick, Chase said.

He said there’s no evidence the mask or water container came from an infected inmate, and the prisoners may have just been trying to spread the virus if they had it. No inmates have admitted to a scheme.

Chase said his deputies need to better educate the inmates about the virus and the severity of their actions.

“We’re responsible for their care,” Chase said. “That includes protecting them from themselves.”

The sheriff’s department has released more than 5,000 inmates during the pandemic to create more social distancing and reduce the spread of the virus.

The department has freed inmates using several qualifications, including if they are within 60 days of release. Inmates who have tested positive for the virus can be released; six total inmates from the North County Correctional Facility have been freed.

Inmates who are awaiting COVID-19 test results are being held in a downtown jail’s hospital ward or being treated at a county hospital if their symptoms are more severe.

For most people, the coronavirus causes mild or moderate symptoms, such as fever and cough that clear up in two to three weeks. For some, especially older adults and people with existing health problems, it can cause more severe illness, including pneumonia and death. The vast majority of people recover.