WORLD California to collaborate with EU, China on carbon markets

California to collaborate with EU, China on carbon markets 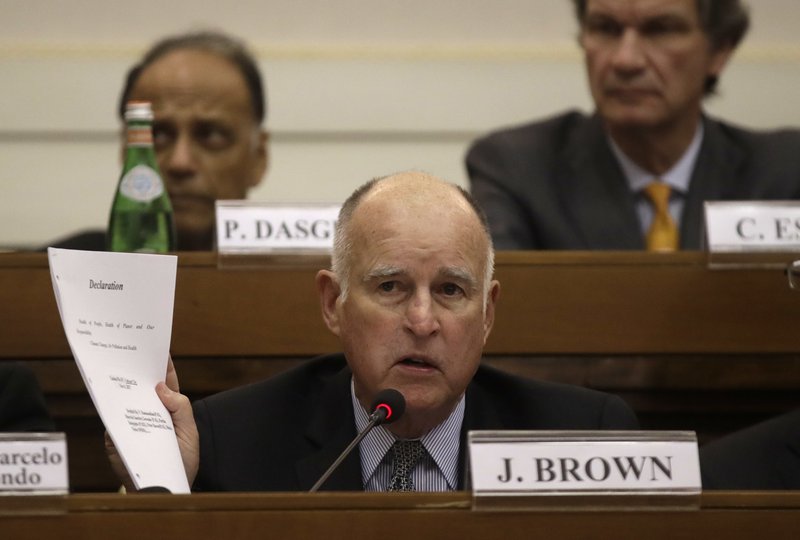 Gov. Jerry Brown announced plans Tuesday to further California’s cooperation with the European Union and China on fighting climate change.California and the EU will begin hosting regular meetings, also working with China, on improving carbon markets, which aim to reduce pollution by putting a price on carbon emissions.The enhanced collaboration, announced after Brown addressed the European Parliament in Brussels, underscores Brown’s emergence as one of the United States’ leading voices on international climate policy even as the federal government recedes.His nearly two-week trip to Europe will end at the United Nation’s climate conference in Bonn, Germany, where the international Paris accord to reduce carbon emissions will be a key topic of conversation. President Donald Trump plans to withdraw the United States from the agreement, but Brown and other governors are pledging to meet its targets anyway.“If we come together and we see the truth of our situation we can overcome it,” Brown said in his address to the European Parliament. “In America, we don’t all agree among ourselves, but people in cities, in states, corporations, universities and nonprofit organizations are joining together. We’re not waiting.”The enhanced collaboration with the EU and China will focus on designing and implementing better carbon markets. China is working to create its own, while the EU operates the largest carbon market in the world. California, meanwhile, operates a carbon market in partnership with the Canadian provinces of Quebec and Ontario.The market-based system requires polluters to obtain allowances in order to emit carbon. The goal is to reduce emissions over time. Brown has long advocated for linking California’s market with other states and nations, and he said Tuesday he hopes to eventually link California’s program with the EU’s. Next week Brown will address a China-organized forum on cap-and-trade programs.“Climate change is a threat to all of humanity, to all species and it can only be solved by a global cooperative effort. It must be far greater than it is today,” Brown said.Brown has started a number of multi-state climate change agreements, including the Under2 Coalition, an agreement by roughly 180 subnational governments to keep global temperature rise below two degrees Celsius. At the U.N. Conference, he’s been named a special adviser for states and regions.