WORLD California utility admits it may have ignited fire

California utility admits it may have ignited fire

California’s biggest utility admitted its electrical equipment may have ignited a ruinous wildfire spreading across the state’s wine country Friday, despite blackouts imposed across the region to prevent blazes.

The disclosure came as firefighters simultaneously battled flames in both Northern and Southern California: the fire amid Sonoma County’s vineyards, and a wind-whipped blaze that destroyed homes near Los Angeles.

The fire near the Northern California town of Geyserville burned at least 49 buildings and 34 square miles (65 square kilometers) and prompted evacuation orders for some 2,000 people.

It was driven by the strong winds that had prompted Pacific Gas & Electric to impose sweeping blackouts affecting a half-million people in Northern and Central California. Power was restored to most people by Thursday evening, PG&E said.

PG&E resorted to shut-offs after fallen power lines and other electrical equipment were blamed for several blazes in recent years that killed scores of people, burned thousands of homes and ran up billions of dollars in claims that drove the utility into bankruptcy.

However, PG&E said Thursday it didn’t de-energize a 230,000-volt transmission line near Geyserville that malfunctioned minutes before the fire erupted. The company reported finding a “broken jumper” wire on a transmission tower Wednesday night. 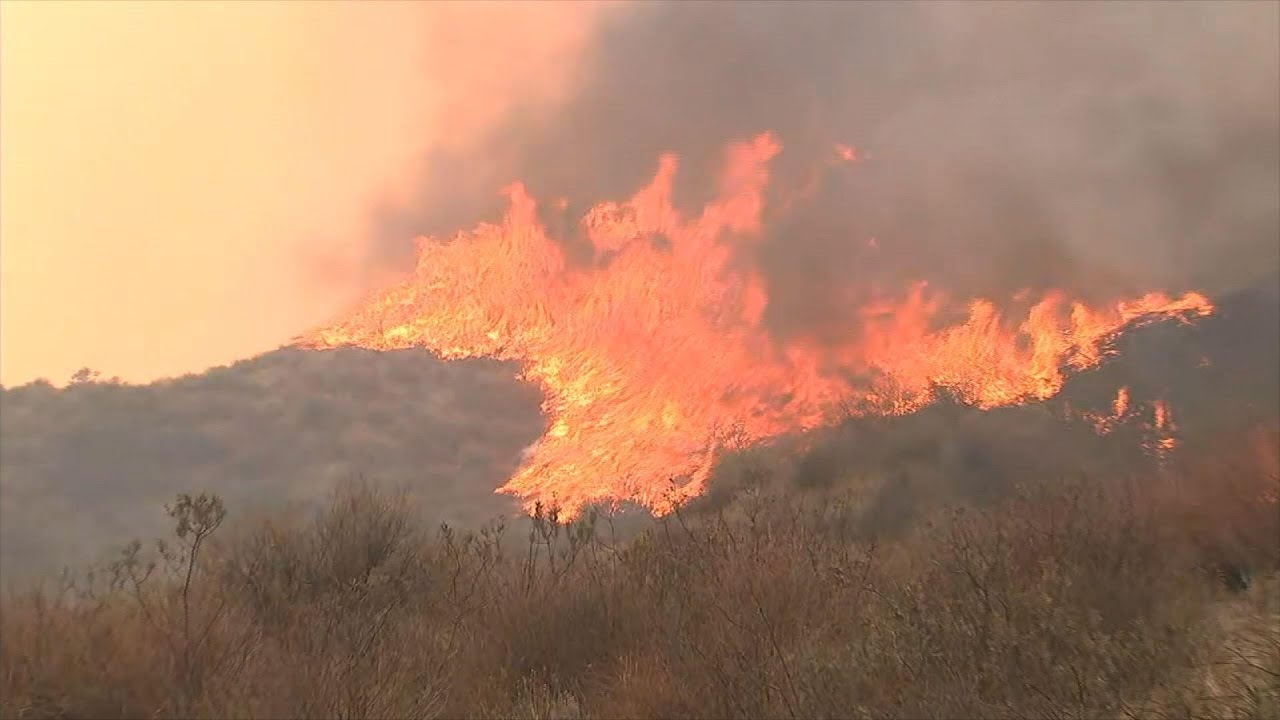 PG&E CEO Bill Johnson said it was too soon to know if the faulty equipment ignited the fire. He said the tower had been inspected four times in the past two years and appeared to have been in excellent condition.

In shutting off the electricity, PG&E cut power to the distribution lines that supply homes, but not to its long-distance transmission lines.

Meanwhile, an estimated 50,000 people were under evacuation orders in the Santa Clarita area north of Los Angeles as hot, dry Santa Ana winds howling at up to 50 mph (80 kph) drove the flames into neighborhoods. At least six homes were burned. No immediate injuries were reported.

“I’m literally seeing sticks and fire of what used to be our home,” Alejandro Corrales told KCBS-TV. She said the fire also took her mother’s ashes, other belongings and possibly a pen full of pet sheep.

“Everything in the house is gone,” Corrales said. “The panels on one of the pens where we have some rescued sheep was too hot for my daughter to open, and so she couldn’t let them out. ... So I’m probably sure that we lost them, too.”

Firefighters on the ground and in the air struggled to protect homes surrounded by trees and brush as the fire grew to 4,300 acres (1,740 hectares).

In some places, they failed. As hot embers flew, subdivision homes and rural ranch properties were damaged or destroyed in Santa Clarita and in nearby Castaic.

Sean Malin, 27, evacuated from Santa Clarit along with his mother and their two dogs after police officers drove down their street, telling them to leave.

“It’s a huge inconvenience,” he said. “On the other hand, I know that the worst thing we could possible do is get in the way of a firefight that needs to happen.”

Some residents tried to fight the blaze with garden hoses. People rushed to rescue dozens of horses, donkeys, goats, a pig and an emu.

Officials said a firefighting helicopter was grounded after its windshield was damaged by a collision with a bird.

High winds were expected to continue through the morning and taper off by late afternoon. Southern California Edison, which shut off electricity to more than 31,000 customers on Thursday, was considering additional power cuts to more than 386,000.

The huge Los Angeles school district closed all its schools in the San Fernando Valley, citing poor air quality and other safety concerns.

While the high winds in Northern California had died down by Friday, they were expected to pick up over the weekend, with gusts of 40 to 60 mph in many places, and PG&E warned it may black out an even larger region.

PG&E chief meteorologist Scott Strenfel said Northern California could be in for the strongest offshore winds in years.