WORLD California wildfires some of largest in state history

California wildfires some of largest in state history

Lightning-sparked wildfires in Northern California exploded in size Friday to become some of the largest in state history, forcing thousands to flee and destroying hundreds of homes and other structures as reinforcements began arriving to help weary firefighters. 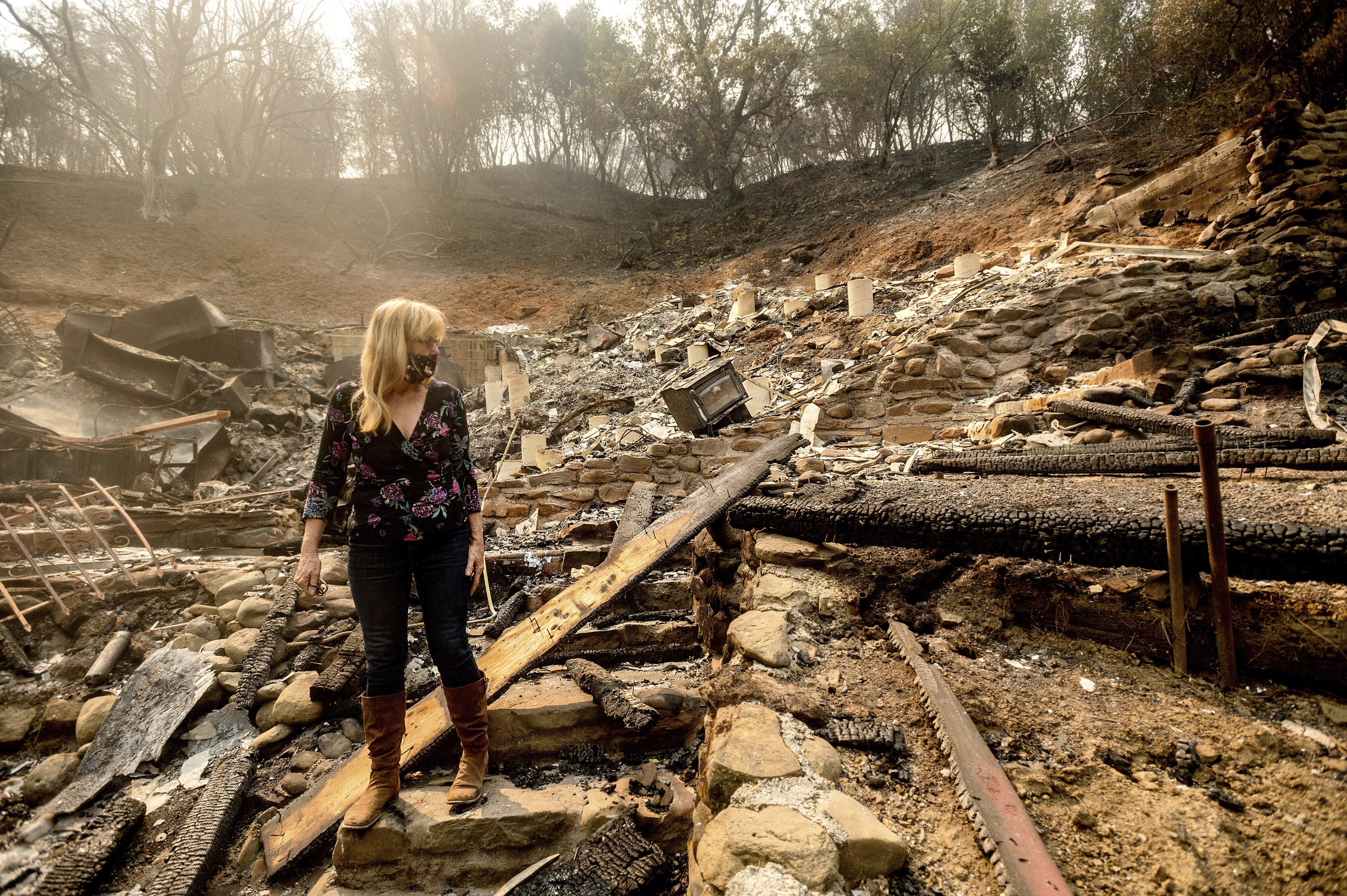 Pam, who declined to give a last name, examines the remains of her partner's Vacaville, Calif., home on Friday, Aug. 21, 2020. The residence burned as the LNU Lightning Complex fires ripped through the area Tuesday night. (Photo: AP)

More than 140,000 people are under evacuation orders.

The blazes, coming during a heat wave that has seen temperatures top 100 degrees, are taxing the state's firefighting capacity but assistance from throughout the country was beginning to arrive, with 10 states sending fire crews, engines and aircraft to help, Gov. Gavin Newsom said.

The number of personnel assigned to the sprawling LNU Complex — a cluster of blazes burning in the heart of wine country north of San Francisco — doubled to more than 1,000 firefighters Friday, he said.

"We have more people but it's not enough. We have more air support but it's still not enough and that's why we need support from our federal partners," Newsom said.

Newsom thanked President Donald Trump's administration for its help a day after pushing back on Trump's criticism of the state's wildfire prevention work, saying that he has a "strong personal relationship with the president."

"While he may make statements publicly, the working relationship privately has been a very effective one," Newsom said.

There are 560 fires burning in the state, many small and remote but there are about two dozen major fires, mainly in Northern California. Many blazes were sparked by thousands of lightning strikes earlier in the week.

Tens of thousands of homes were threatened by flames that drove through dense and bone-dry trees and brush. Some fires doubled in size within 24 hours, fire officials said.

"We had last night three separate rescues that pulled our vital, very few resources away," he said.

An anxious Rachel Stratman, 35, and her husband, Quentin Lareau, 40, waited for word Friday about their home in the Forest Springs community of Boulder Creek, in Santa Cruz County, after evacuating earlier this week. She knew one house burned but received conflicting information about the rest of the neighborhood.

"It's so hard to wait and not know," she said. "I'm still torn if I want people to be going back to the area and videotaping. I know they cause the firefighters distraction, but that's the only way we know."

The couple were in a San Jose hotel with medication she needs after undergoing a transplant surgery last month. She collected her mother's ashes and some clothes while her husband closed windows and readied the home before they evacuated Tuesday.

"I kept looking at things and kept thinking I should grab this or that, but I just told myself I needed to leave. I didn't bring any official documents and I didn't bring my house deed or car title. No passport," she said.

The ferocity of the fires was astonishing so early in the fire season, which historically has seen the largest and deadliest blazes when dry gusts blow in the fall.

But the death toll already had reached at least six since the majority of blazes started less than a week ago. Five deaths involved fires burning in wine country north of San Francisco. The other death was a helicopter pilot who crashed while dropping water on a blaze in Fresno County.

Henry Wofford, spokesman for the Napa County Sheriff's Office, said three of the bodies were found Thursday in a burned home. The area was under an evacuation order due to "very, very heavy" fire that he said burned multiple homes. He said authorities are trying to determine the identities.

In neighboring Solano County, Sheriff Thomas A. Ferrara reported the death of a male resident. The other victim was a Pacific Gas & Electric utility worker who was found dead Wednesday in a vehicle in the Vacaville area.

At least two other people were missing and more than 30 civilians and firefighters have been injured, authorities said.

Smoke and ash billowing from the fires has fouled the air throughout the San Francisco Bay Area and along California's scenic central coast.

The SCU Lightning Complex fire burning east of San Francisco started Tuesday and the slightly smaller LNU Lightning Complex burning in wine country that was sparked a day earlier already have become among the 10 largest wildfires in state history. Firefighters had only contained a small portion of the wildfires by Friday afternoon.

In Napa County, Crosswalk Community Church has transformed its sanctuary and gymnasium into an evacuation shelter, filling the floor with cots spaced at least 6 feet (1.8 meters) apart. Pastor Peter Shaw said the church has seen a steady stream of people stopping for resources. Some were just looking for information, while others needed gift cards for food and basic needs.

"COVID-19 complicates everything," Shaw wrote in an email to The Associated Press. "Socially distanced cots drastically decreases our capacity."

A few people have stayed the night, Shaw said, adding several people parked their RVs in the church parking lot.

"The longer the evacuations stay in place, I suspect the more people we will see," he said.

Eric Swensen packed early and got ready to evacuate after seeing ash, burned leaves and charred bark fall around his family's home in Boulder Creek earlier this week. He, his 11-year-old son, girlfriend Gundy Sartor, and neighbor Lesley Wludyga packed a pet lizard and important documents and headed north to Redwood City.

But as of Friday, he still hadn't heard if his home had survived. He read on social media that firefighters had to retreat from the area.

"Obviously, the current resources dedicated to the fire are nowhere near enough, but we also understand that California is burning, and they are doing what they can," Swensen said.