California weather was heating up and winds were shifting Thursday as more than 14,000 firefighters battled wildfires up and down the state, including a major blaze they hoped to keep out of the Lake Tahoe resort region. 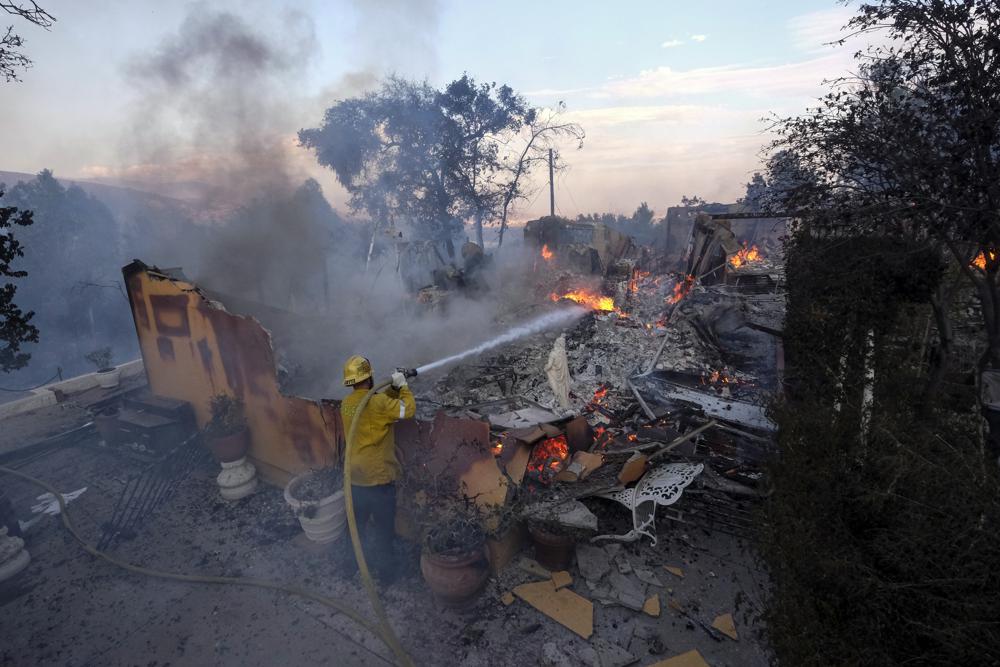 A firefighter tries to extinguish the flames at a burning house as the South Fire burns in Lytle Creek, San Bernardino County, north of Rialto, Calif., Wednesday, Aug. 25, 2021. (Photo: AP)

Onshore winds from the west and southwest were changing direction to offshore, blowing out of the north or northeast, and fire weather watches were to take effect in Northern California by the end of the week, the National Weather Service said.

The Caldor Fire, the nation's top priority for firefighting resources, grew to more than 213 square miles (551 square kilometers) southwest of Lake Tahoe but containment remained at 12%, according to the California Department of Forestry and Fire Protection.

Smoke stained the normally blue skies over the alpine lake but the pollution level Thursday morning was reduced to "unhealthy," down two levels of severity from 24 hours earlier when it was "hazardous," according to the U.S. Air Quality Index.

Assigned resources have grown to nearly 2,900 firefighters, 21 helicopters, 245 engines and dozens of bulldozers since the early days of the fire, which began Aug. 14, and suddenly exploded, gutting the community of Grizzly Flat. Ongoing damage assessments have counted 637 homes, businesses and other structures destroyed.

With bone-dry conditions in the midst of a severe drought, there were 14 large fires statewide, including a blaze that erupted Wednesday in Southern California, which has so far escaped the scale of wildfires plaguing the north all summer.

The South Fire about 45 miles (72 kilometers) east of Los Angeles covered 700 acres (283 hectares) after destroying 18 homes, commercial and other structures. Fire activity decreased after the early hours but it remained uncontained on mountain slopes.

In the southern Sierra Nevada, the 9-day-old French Fire covered more than 34 square miles (88 square kilometers) and was 19% contained. Some structures were seen burning in Sequoia National Forest and it posed threat to numerous communities on the west side of Lake Isabella, a popular outdoor recreation area northeast of Bakersfield.

Meanwhile, California's Dixie Fire, the second-largest in state history at 1,167 square miles (3,022 square kilometers) was 45% contained in the Sierra-Cascades region about 65 miles (105 kilometers) north of the Caldor Fire. Nearly 700 homes were among almost 1,300 buildings that have been destroyed since the fire began in early July.

Nationally, 88 large fires were burning Thursday in 13 mainly Western states, according to the National Interagency Fire Center in Boise, Idaho.