WORLD Californians to vote on whether there should be 3 Californias

Californians to vote on whether there should be 3 Californias 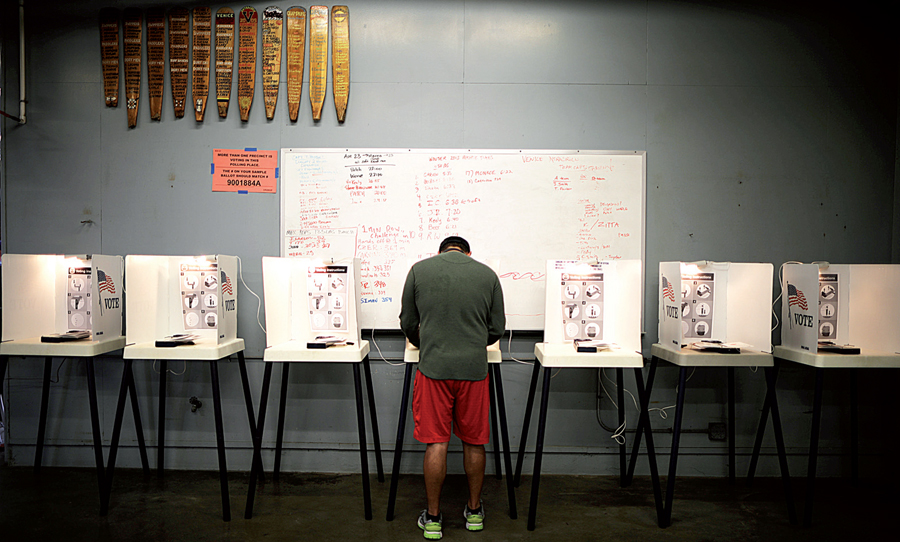 A man votes in the primary election at a polling station in Los Angeles on Tuesday. (Photo/Agencies)

For the first time since the US Civil War, voters in a US state — California — will decide on a proposal to divide their state.

And though a measure to split the most populous US state into three separate states qualified on June 12 to be on the ballot in November's general election, few give it a chance of being approved. An April SurveyUSA poll found that 72 percent of Californians would vote against it, and just 17 percent would vote yes.

"It all seems a bit unrealistic," said Shaun Bowler, a political science professor at the University of California Riverside, in an email.

"It is just not clear what problem would go away if we were in three states. We still need to figure out how to fund schools, roads and police, and how to find water and housing, etc," he said.

But even if approved, the measure would then face legal hurdles as well as need approval from the state Legislature and then Congress.

The referendum is the third attempt to divide the Golden State state by billionaire venture capitalist Tim Draper, 60. He tried in 2012 and 2014 but didn't get the required number of signatures to put it on the ballot.

Draper spent almost $4.9 million of his own money on the unsuccessful signature drive in 2014, according to the Los Angeles Times, which said that state records through last December report only about $559,000 being spent.

In those two previous attempts, Draper wanted the state divided into six parts. The latest effort — called "Cal-3" — would divide the state into Northern California, Southern California and California, with one (California) centered around Los Angeles and the other two divvying up the counties to the north and south. It would roughly divide the population of the existing state into thirds.

"Three Californias will give Californians better education, better infrastructure and lower taxes," Draper said when he launched the campaign in November. "Three new state governments will be able to start fresh, to innovate and better serve their people," he said.

"None of those real problems go away just because there is a state border or two running through the middle of California," said Bowler.

He said what is clear is there would be many problems if it passes, ranging from maintaining freeways and establishing sales taxes to how a water system would be handled.

Much of California's rain and snow falls in the north, while much of the demand for water is in the south. The proposed state of California, including Los Angeles, would be a net importer of water from the other two proposed states.

If the measure passes, the existing state and the three new states would have to pay various one-time costs in the decade or so to transition from one state to three states, such as building new state capitols, according to a report prepared by California legislative analyst Mac Taylor and Director of Finance Michael Cohen in October.

Steven Maviglio, a political strategist representing opponents to the effort, projected the transactional costs at billions of dollars, and called the measure a "massive distraction" that will cause "political chaos and greater inequality".

Although Draper said the proposal is non-partisan, some people see it as a referendum on Democratic leadership in the state. California state Senator Joel Anderson, a Republican, said he will vote for it.

"There is no greater insult to the one-party rule in California," Anderson was quoted in a San Francisco Chronicle story on June 13. "It's a barometer of the potential unhappiness of the state."

If the three-state proposal were approved, it would be the first division of an existing US state since the creation of West Virginia in 1863.

California, which was admitted to the Union on Sept 9, 1850, has a history of more than 200 attempts to reconfigure its boundaries or secede and become a separate country.

The proposed split reminds Bowler of Brexit (the nickname for a British exit from the European Union). "We can see — as with Brexit — how easy it is to start blaming government. It is always possible to make up stories if the facts do not fit," he said. "And the British case of Brexit is just full of examples of supporters of secession basically making up stories that are just not true, yet believed."

What also concerns him is that the proposal may set a precedent that if someone doesn't like the incumbents they can just divorce or secede.

"So everyone who did not vote for Senator Anderson could say 'as a referendum on the senator we want to break away from his district' and set up a separate state from him," he said.