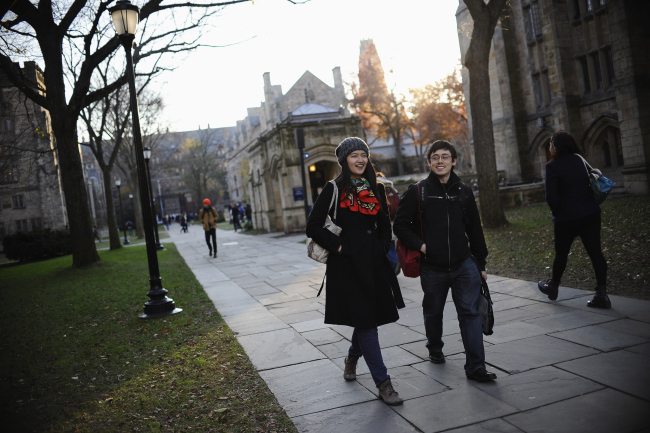 A Yale University sophomore, left, walks with his friend on the school's campus in New Haven, Connecticut. (Photo: IC)

The Association of American Colleges & Universities and 21 other organizations have signed a statement in response to reports that the federal government has advised universities in the United States to develop protocols for monitoring students and scholars from research institutions affiliated with China's government.

The statement published on PEN America on Monday says that this "is an area where the government must tread carefully." It advises universities to "zealously safeguard their independence - to maintain their commitment to academic freedom, to uphold the principle of due process, and to respect the privacy rights of students and faculty, no matter their national origins."

According to the statement, more than 340,000 students from China were studying in the United States last year. The statement says that if this issue is not handled carefully, it "risks hampering the future recruitment of talented foreign students and scholars to American shores."

The statement also warns that "calls to monitor individuals solely based on their country of origin violate norms of due process and should raise alarms in a democracy."

A spokesperson for China's Foreign Ministry has said that exchanges of personnel are a basis for promoting cooperation between China and the United States, and should not be politicized and unreasonably restricted.