Calls increase for Democrats to face climate change in Miami 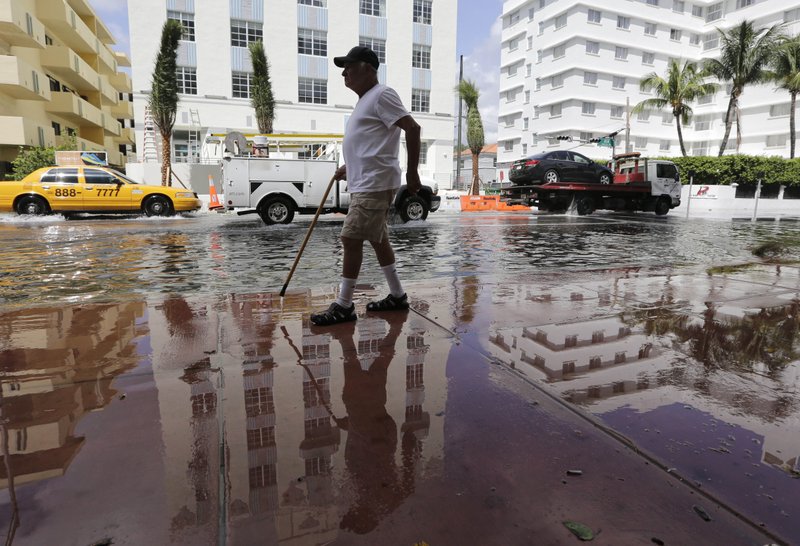 Rising sea levels could threaten the very existence of Miami and much of the rest of South Florida, and Democrats are facing calls to confront climate change squarely during this week’s presidential debates in the low-lying city.

The City of Miami has a $400 million bond program to finance climate change resiliency projects, including $192 million for seawalls, pumps and similar projects. Miami Beach has already begun spending up to $500 million to raise roads, install pumps and do similar work over five years.

Those huge price tags are just one reason why many think it’s vital that climate change take center stage at the debates Wednesday and Thursday.

“It’s up to our 2020 candidates — and the Miami debates are a perfect place to start — to tell voters how they plan to confront it,” said Crist, who served as a Republican Florida governor and later switched parties. He represents the highly-vulnerable St. Petersburg area and is co-sponsoring a bill to make carbon polluters help foot the bill for this resiliency work.

Clearly, the Democratic candidates are getting the message. Nearly all of them have offered significant climate change proposals. The costliest are Washington Gov. Jay Inslee’s $9 trillion plan to shift energy away from fossil fuels to renewable energy and former Texas Rep. Beto O’Rourke’s $5 trillion idea that includes a goal of zero net carbon emissions by 2050.

Former Vice President Joe Biden calls for a “clean energy revolution” that includes $1.7 trillion to zero out carbon emissions by 2050. Vermont Sen. Bernie Sanders supports a “Green New Deal” to move the US from fossil fuels toward a new energy infrastructure that he says would create jobs. Massachusetts Sen. Elizabeth Warren wants to invest $2 trillion into clean energy technology research.

The question is how much the candidates will emphasize the issue.

Ed Marbach, director of the George Mason University Center for Climate Change Communication, said polling indicates Floridians are more concerned about the impact of climate change than other Americans, but others are concerned too. The poll found that only 9% of Americans as a whole are completely dismissive of any threat as President Donald Trump and many other Republicans are.

“The majority of Americans are really concerned,” Marbach said in a recent conference call. “Those Americans who doubt that this is a problem are contracting.”

According to the Florida Department of Health, about 590,000 people in South Florida face “extreme” or “high” risk of sea level rise in the coming years.

The 2018 National Climate Assessment concluded that the combined impact of sea level rise and tropical system storm surge could cost $60 billion a year in 2050 and up to $99 billion annually by 2090 under a worse-case scenario.

Florida has a 1-in-20 chance of having $346 billion in property value below average sea level by 2100, the national assessment estimated.

Miami resident Ben Honeycutt, walking his dog Pippa through a flooded street near Biscayne Bay after recent heavy rains, said it’s “absolutely” critical for the Democratic debates to address climate change. A registered independent voter, Honeycutt said the issue is at the top of his presidential agenda.

“If our leaders aren’t going to make it a priority, then I think that’s a mistake,” said Honeycutt, whose home is 10 feet above sea level now. “The water in our neighborhood was up to my knees a couple of days ago.”