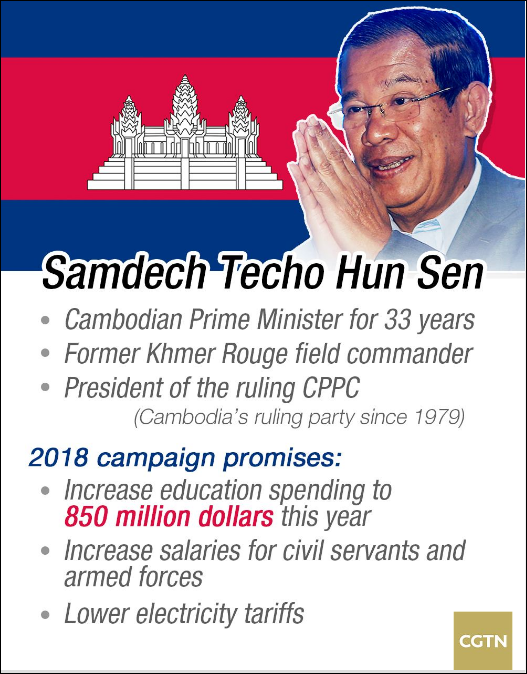 Cambodia is gearing up for a general election on Sunday. Across the country, ballot boxes have been put in place and voter lists pasted up at the almost 23,000 polling stations.

Hun Sen, the world’s longest-serving prime minister, will become the leading actor again, with little doubt that he will win the election once again with a landslide victory.

Though the win will be difficult and Cambodia's future still faces challenges from domestic and international pressures, 66-year-old Hun Sen seems to have made up his mind to hit a way out for a better Cambodia.

The Cambodian People's Party (CPP) would pay "any cost" to maintain the country's hard-earned peace, not allowing any foreign power or group to destroy it.

Prime Minister Hun Sen made the remarks at the party's massive rally on Friday. "Anyone who goes to vote is supporting democracy. Anyone who does not, intentionally, is destroying it," he added.

Hun Sen focused on the issues of security and prosperity during his pre-election campaign.

CGTN's correspondent Rian Maelzer in Phnom Penh also reported that Cambodian people may stick with the ruling party and Hun Sen because of good performance in economic areas.

Cambodia has been the world’s sixth fastest growing economy over the past two decades, according to the World Bank, with growth expected to be 6.9 percent this year.

According to the National Election Committee (NEC), 20 political parties are contesting in the forthcoming election.

The main opposition CNRP is calling for a boycott of the poll and says the ruling party is pressuring people to vote. The "clean finger" campaign – a reference to the ink applied to voters' fingers by polling officials after they have cast their ballot, is on in Cambodia.

Five former CNRP officials were found guilty of obstructing people from voting and fined over a Facebook post supporting a boycott campaign on Thursday, which is said to violate article 142 of the Election Law.

“The election is a complete sham lacking any credibility. It’s a one-horse race,” said Kem Monovithya, daughter of the detained CNRP leader Kem Sokha, who was jailed in September on treason charges.

Cambodia’s Supreme Court dissolved the CNRP in November 2017 over allegations it was involved in a plot to topple the government.

While the CNRP has called on Cambodians to boycott the ballot in protest, the US and the EU have withdrawn financial support to the polls – which they have provided for previous elections – over concern that the vote will not be credible.

With 20 parties competing in the election, the government says its democracy is healthy.

Japan has granted about 7.5 million US dollars in aid to the NEC for the July 29 general election, while China pledged to provide 134 computers, 30 security cameras and a number of radios, printers and pieces of office furniture, according to the NEC.

Japanese Ambassador to Cambodia Hidehisa Horinouchi told the Khmer Times in July that the enhancement of the credibility of the electoral process is an essential factor to have elections reflect the will of the Cambodian people, so Japan offered help.

About 306 international observers from over 40 countries will monitor Cambodia's general election on July 29 as the spokesman for the NEC said.

Besides international observers, nearly 90,000 local observers from political parties and about 80,000 others from national associations and organizations in the country are also expected to monitor the election.

NEC member and spokesman Hang Puthea said at a press conference on Friday that a total of 22,967 polling stations will be opened at 7:00 am local time and will close at 3:00 pm on Sunday.