Cambodia is shutting its most popular tourist destination, the centuries-old Angkor temple complex, to visitors for two weeks to help curb the country’s coronavirus outbreak. 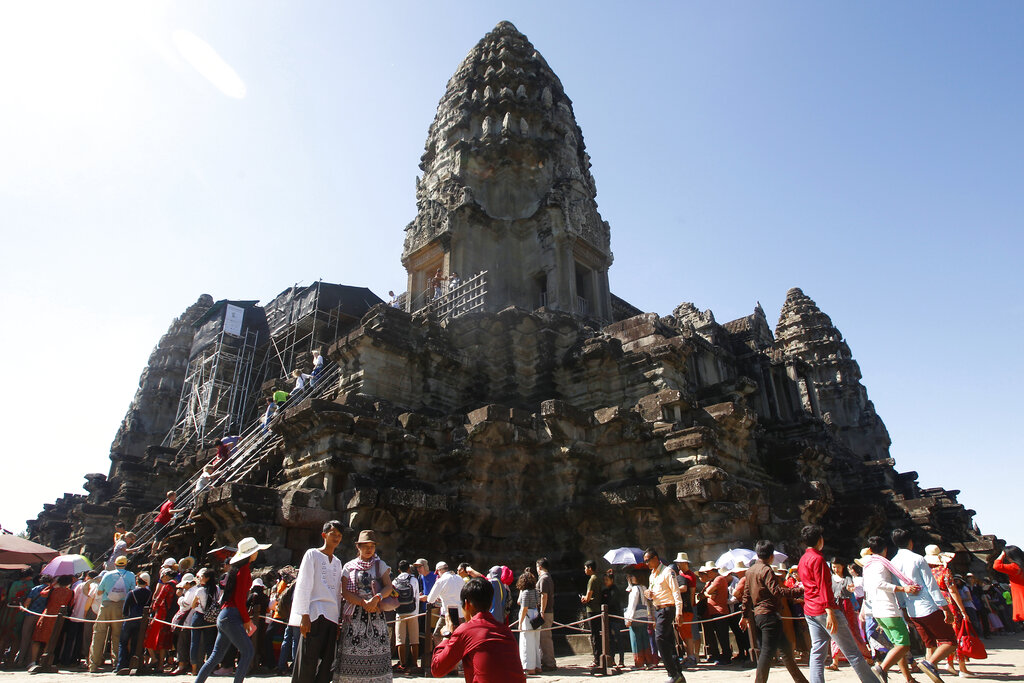 In this Sunday, Dec. 31, 2017, file photo, tourists line up for stepping up Angkor Wat temple outside Siem Reap, Cambodia. Cambodia is closing the Angkor temple complex to visitors because of a growing COVID-19 outbreak. (Photo: AP)

The closing of the world-famous site is the latest in a slew of measures the country is taking after the number of coronavirus cases surged in February.

The Apsara Authority, the government agency that oversees the archaeological site, said that temporarily stopping local and foreign tourists from visiting the temples is important to help combat the virus. It said in a statement dated Wednesday that visitors are banned from April 7 through April 20.

The Angkor site, in the northwestern province of Siem Reap, attracted 2.2 million foreign tourists in 2019, but experienced a sharp falloff last year due to disruptions caused by the pandemic. Cambodia allows in tourists, but they must undergo a quarantine.

The Health Ministry on Thursday announced 113 new local cases of the coronavirus and two deaths. Cambodia has recorded a total of 3,028 cases, including 23 deaths.

The ministry has traced the latest outbreak to a foreign resident who broke quarantine in a hotel and went to a nightclub in early February. The government on Feb. 20 announced a planned two-week closure of all public schools, cinemas, bars and entertainment venues in the capital, Phnom Penh.

As the number of cases rose, the closures were extended throughout the country for schools, gyms, concert halls, museums and other gathering places.

A defunct luxury hotel in the capital has been converted into a 500-room coronavirus hospital, and the authorities are enforcing a new law imposing criminal punishment for violating health rules.

The use of face masks was made mandatory in Phnom Penh and four of the country's most densely populated provinces.

The government stepped up other restrictions at the start of this month, including a two-week, 8 p.m. to 5 a.m. curfew in Phnom Penh.

It also broadened its coronavirus vaccination campaign, targeting 1 million doses a month beginning in April. Through the end of March, about 400,000 people — about one-third of them members of the armed forces — had received vaccinations.

By the end of March, Cambodia had acquired more than 3.1 million doses of vaccines from China and through the World Health Organization’s COVAX initiative. Cambodia has a population of about 17 million.

Prime Minister Hun Sen said this week on his social media channels that vaccinations are voluntary, but that civil servants and members of the military would be at risk of being dismissed if they fail to be inoculated.