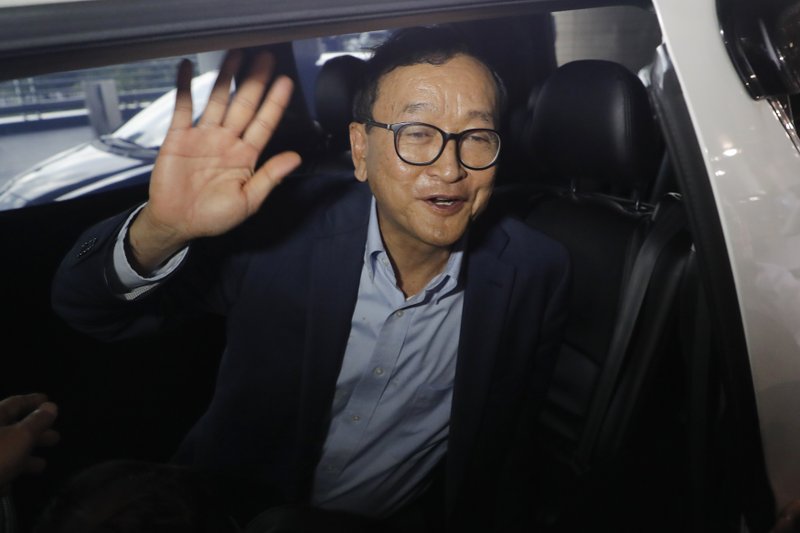 Cambodia's exiled opposition leader Sam Rainsy waves as he gets in a car after arriving at Kuala Lumpur International's Airport in Sepang, Malaysia Saturday, Nov. 9, 2019. Sam Rainsy landed in Kuala Lumpur in a bid to return to his homeland after Thailand had earlier blocked him from entering. (Photo: AP)

Cambodia’s exiled opposition leader Sam Rainsy arrived in Malaysia on Saturday, making partial progress in his quest to return to his home country to lead a movement to try to oust long-serving Prime Minister Hun Sen.

Sam Rainsy arrived in Kuala Lumpur in the afternoon after announcing earlier that he was boarding a plane in Paris, his home in exile, without disclosing his destination.

He and fellow members of the banned Cambodia National Rescue Party had publicly declared that they planned to return to their homeland on Saturday, Cambodia’s Independence Day, to end the authoritarian rule of Hun Sen and restore democracy.

Hun Sen’s government has vigorously opposed their return and declared they would be arrested immediately if they made it onto Cambodian soil.

In what may be a possible turnaround in the Cambodian government’s position, however, its influential deputy prime minister and interior minister, Sar Kheng, said on his Facebook page Saturday, “As of now, there is not any announcement by the Cambodian government to bar culprit Sam Rainsy and his colleagues from entering the country.”

Sar Kheng said Sam Rainsy — who has several convictions with prison sentences to serve along with charges pending for several other alleged offenses — can return as an ordinary person but will have to face due justice. Sam Rainsy considers the legal actions political persecution.

Sam Rainsy spoke to reporters briefly on his arrival in Kuala Lumpur and appeared to acknowledge that he would not make it to Cambodia on Saturday, saying he had been invited by Malaysian lawmakers to meet with them on Tuesday. He declared that his visit was a private one and that he was grateful to the Malaysia authorities.

His comments appeared to sidestep the issue of whether he was interfering with Cambodia’s internal affairs while on Malaysian soil. Malaysia and Cambodia are both members of the Association of Southeast Asian Nations, which maintains a policy of noninterference in each other’s affairs. Malaysia and Thailand have both hindered the free movement of opposition party leaders, drawing criticism from human rights groups.

Hun Sen and his ruling Cambodian People’s Party have a stranglehold on power, which was ensured when Cambodia’s high court dissolved the Cambodia National Rescue Party in late 2017 for allegedly treasonous activities.

In a video posted Saturday morning on his Facebook page, Sam Rainsy had assured his supporters: “Our victory is getting nearer and nearer. The change of regime through the democratic means will soon arrive and be accomplished.”

He expressed similar confidence on his arrival in Malaysia.

“I will go back home, of course. It is my right. And also my duty,” he told reporters, without detailing his plans.

But he and his colleagues face an uphill battle.

An effort Sam Rainsy made Thursday to fly from Paris to Thailand — Cambodia’s western neighbor — was thwarted when Thai Airways refused to let him board. Thai Prime Minister Prayuth Chan-ocha had said earlier that he would be barred from entering Thailand.

Hun Sen’s government has declared Sam Rainsy and fellow leaders of the banned Cambodia National Rescue Party unwelcome to return, beefing up security on the country’s land borders and telling airlines they should not carry him to his homeland. It also informed Cambodia’s neighbors in the Association of Southeast Asian Nations of its position, leading at least one, Malaysia, this past week to temporarily detain the deputy leader of the opposition party, Mu Sochua, and two junior party members.

Inside Cambodia, scores of supporters of the opposition party have been arrested in the past few weeks.

Security in Phnom Penh was heavy and on especially high alert Saturday at the country’s border checkpoint at Poipet in the country’s northwest, where Sam Rainsy and his top party leaders had announced that they and their supporters would be crossing from Thailand. Traffic to the checkpoint as well as across the border was limited, with Cambodian migrant workers in Thailand reportedly barred from entry.

Sam Rainsy has been Hun Sen’s most prominent foe for decades. He went into exile in late 2015 to avoid a two-year prison sentence on charges of criminal defamation. Other legal cases have since been lodged against him by the government.

Other top party members fled into exile after the 2017 crackdown on all opposition to Hun Sen, which included the party’s dissolution, the shuttering of virtually all critical media and the arrest of the party’s other co-founder, Kem Sokha. He was charged with treason, based on his links to a U.S. pro-democracy organization, and is under strict house arrest.