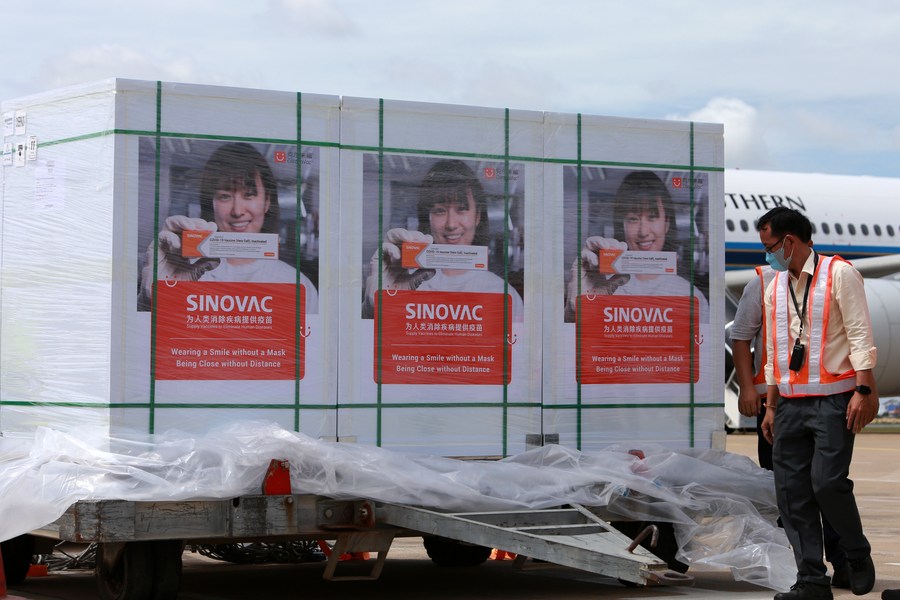 Speaking to reporters while receiving the vaccines at the airport, health ministry's secretary of state Yok Sambath said the vaccines were purchased from Chinese biopharmaceutical firm Sinovac Biotech.

She expressed gratitude to China for providing vaccines to Cambodia, saying that the Southeast Asian nation now has enough vaccines to sustain the immunization campaign.

"As we see, in either donated or purchased vaccines, the Chinese government always does what it says," she said. "With the coordination of the two countries' embassies, we have worked together well and smoothly."

According to Sambath, Cambodia has so far received about 25 million vaccine doses, mostly from China.

The country launched an anti-COVID-19 vaccination drive on Feb. 10, targeting to vaccinate 12 million people, or 75 percent of its 16-million population by November.

To date, 8.51 million people, or 53.2 percent of the total population, have received at least one dose, and 6.63 million of them have completed the two-dose inoculation, according to the health ministry.

The kingdom reported 455 new COVID-19 cases on Thursday, pushing the national caseload to 83,839, the health ministry said, adding that 20 more fatalities were recorded, taking the death toll to 1,634.

On Wednesday, China donated a new batch of anti-COVID-19 materials to Phnom Penh, the Chinese embassy in Cambodia said on its Facebook page.

Wang said the donation reflected the profound friendship of the Chinese people with the Cambodian people, and expressed his hope that the donation would help Phnom Penh fight the pandemic more effectively.

Meanwhile, Sreng said that the effective control of the pandemic in Phnom Penh was attributed to the timely supplies of COVID-19 vaccines from China.

"My colleagues and I work on the frontline in the fight against the pandemic, but we have never been infected. This is due to the effective protection from the Chinese vaccines," he said.