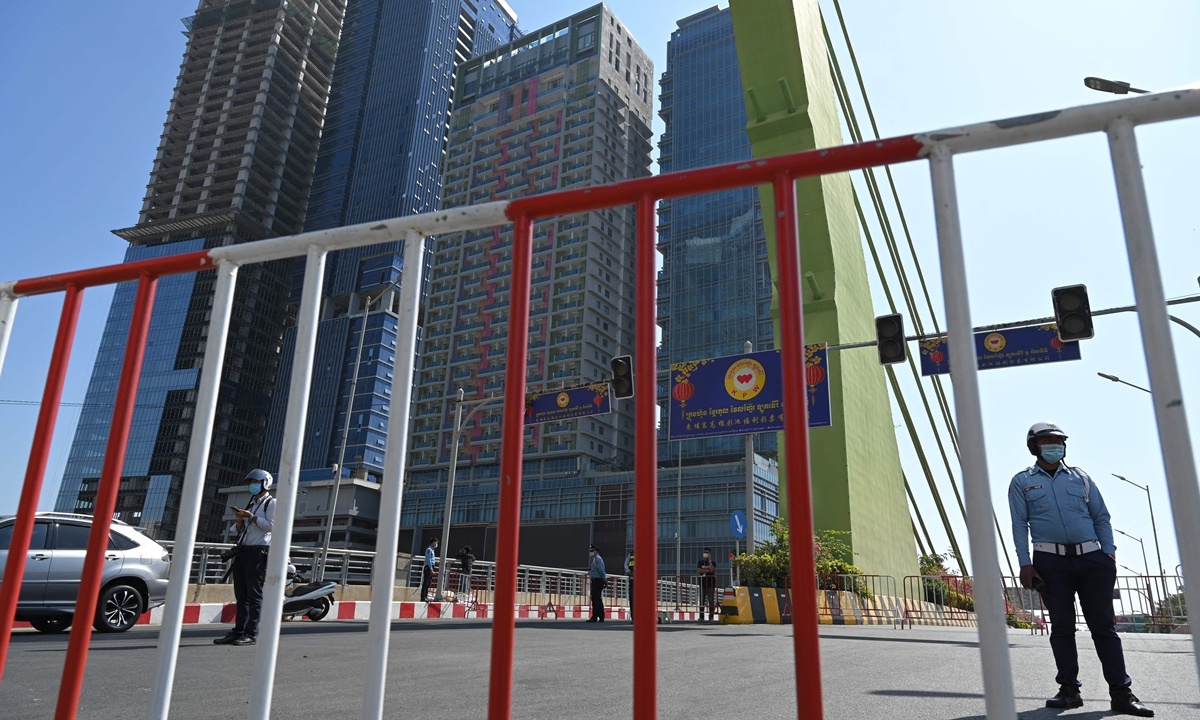 Cambodian police stand guard as they lock down a bridge to the Koh Pich district in capital Phnom Penh on Saturday, after authorities found 32 local cases of COVID-19 infections. (Photo: VCG)

Cambodia has heightened epidemic control measures amid a community outbreak involving more than 45 cases of COVID-19 infections over the weekend, which authorities said was a critical threat to the country that was less impacted by the coronavirus, with total cases at 533. The majority of the patients are Chinese nationals, local media said.

Chinese experts noted cluster transmissions cannot be ruled out when the virus is circulating among people and when there are gatherings, but judging from the features of the country's epidemic, they said the latest outbreak is unlikely to develop into massive contagion.

Cambodian media outlet the Khmer Times reported on Sunday that 29 of the 32 confirmed patients on Saturday are Chinese nationals and 24 contracted the virus from one Chinese woman who tested positive when she applied for a health certificate in preparations to return to China. Among the 17 confirmed Sunday, 15 were connected to the Saturday cluster infections.

Chinese nationals in Cambodia reached by the Global Times said that there are checkpoints on roads to the Koh Pich area in the capital city Phnom Penh, where the transmissions occurred, but that traffic is not totally sealed off. A Chinese resident who required anonymity said on Sunday that a wedding ceremony had been held in the area and their lives were not much impacted.

A night club, some apartments as well as residential areas in Koh Pich have been temporarily locked down. People in those areas are required to undergo a 14-day home quarantine.

Cambodian Prime Minister Hun Sen on Saturday noted it was "a very bad situation" and called for people to observe epidemic control rules and not discriminate against Chinese, the Khmer Times reported Saturday.

Many details of the cluster infections have not been revealed, including how the super spreader got the virus in the first place and infected others, and contact tracing is undergoing, it reported.

Authorities are confident they can put an end to the cluster transmissions in a month, the prime minister said, and Chinese experts have drawn similar conclusions.

Yang Zhanqiu, deputy director of the pathogen biology department at Wuhan University, told the Global Times on Sunday that as long as there are virus carriers, silent or not, as they walk around, they could cause clustered infections if there are large gatherings. One super spreader infecting dozens has happened in many places and Cambodia is no exception.

But the country has an advantage in that the high temperature means the virus' activity weakens quickly in following rounds of transmissions. More cases will be identified but the clustered outbreak is unlikely to develop into mass contagion, Yang said.

Yang's judgment is consistent with Cambodia's overall epidemic features. The country saw three major waves of infections from March to April and July to August in 2020, and the latest round started from the end of 2020. At other times, the country had only registered a handful or zero cases.

But Yang also warned that containing the latest outbreak requires effective implementation of the control measures. Chinese nationals in the country should observe local rules to protect the public and themselves.

The Chinese Embassy to Cambodia issued a statement on Saturday asking Chinese nationals to strictly observe epidemic control rules as some Chinese arrivals have left the quarantine hotel or escaped treatment centers after testing positive, which are illegal acts that compromise local epidemic control.