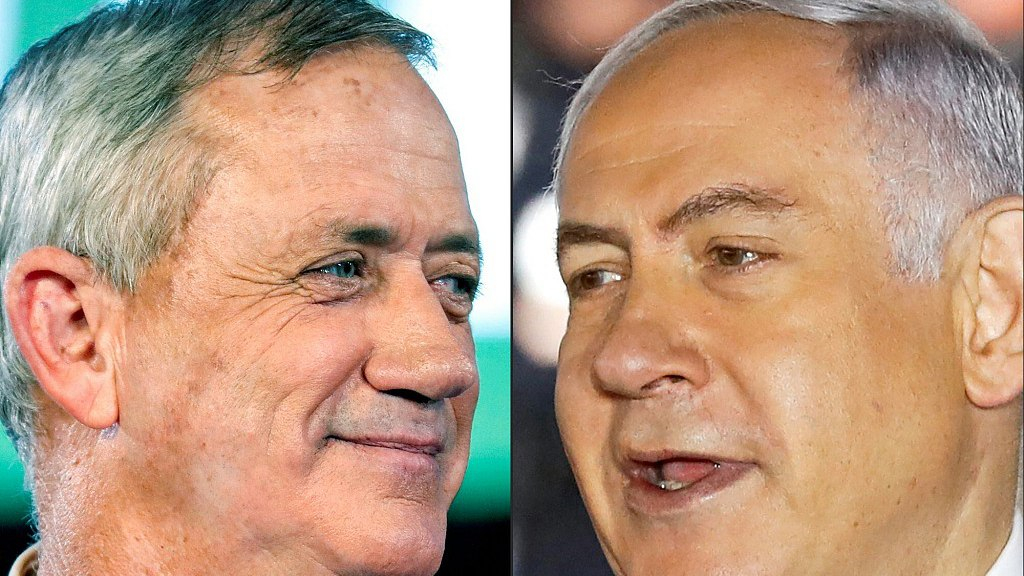 Israeli voters are going to the polls on Tuesday to determine how the 120 seats in Israeli parliament, the  Knesset, should be allocated by 47 parties and who will lead the country in the next four years.

With 13 years in power, the incumbent Israeli Prime Minister Benjamin Netanyahu is now eyeing a fifth term to become the country's longest serving prime minister. However, this time, the former military chief Benny Gantz could be a strong challenger to oust Bibi.

In Israel, the seats in parliament are distributed to each party in proportion to share of the overall vote it receives. For 6,339,279 eligible voters, they will only vote for parties not a single candidate on Tuesday.

Thus, in order to be present in the Knesset, the party has to earn at least 3.25 percent of total votes.

Until now, none of a single party has occupied more than 60 seats in the Knesset to form a government by its own.

After consultations with party leaders, the president usually will nominate a member of the Knesset who he thinks is winnable to form a coalition government, to become prime minister.

The party leader who leads in the parliament doesn't automatically mean that person will become prime minister.

The would-be PM then has 42 days to form a coalition government and has to win a confidence vote in the parliament before officially assuming office.

If the first nominee fails, the president will give a second candidate 28 days. If he or she fails again, the third candidate will have 14 days to form a government.

Dubbed by his supporters "King Bibi," Netanyahu who was born in 1949 in Tel Aviv spent his teenage years and obtained academic degrees in the US.

After spending four years as Israel's permanent representative at the UN, Netanyahu returned to Israel in 1988 and became the leader of Likud party in 1993.

Overcoming the criticism of inexperience, Bibi become the country's youngest-ever PM in 1996, although his brief first term was dramatic and marked by divisions in his coalition.

Defeated in 1999, Netanyahu left politics but returned in 2005 winning back his leadership in Likud. Since 2009, he has been elected as PM again and again served three terms.

The hard-line politician has launched two major offensives against militants in Gaza and had a hawkish view on Iranian nuclear program negotiations.

US. President Donald Trump's arrival in office warmed bilateral ties and the US president official recognized Jerusalem as Israel's capital.

However King Bibi is now under the shadow of corruption scandals and is fighting for his political survival.

He is still charged in three separate cases with bribery, fraud and breach while the right-wing leader denied all wrongdoings.

Gantz served as chief of staff under Bibi's government from 2011 to 2015 and witnessed the two offensives.

To unseat Netanyahu, he formed the Blue and White party alliance with an experienced politician, former Finance Minister Yair Lapid. They agreed to serve as the PM in turn if they can win the election.

"There is only Israel before everything," the centrist Gantz vowed to unite the divided Israeli society trying to appeal all parts of the country no matter his religious, political and ethnic lines.

He promised to amend Nation-State Law which controversially introduced that Israel is the national home of the Jewish people.

As an army man, Gantz has not surprisingly emphasized security and showed a tough approach against Hamas and Iran.

Critics said Gantz's policies remain unclear and the veteran has also suffered scandals although he denied all allegations. A family in Gaza sued him as a war criminal while in February he was also accused of sexual misconduct during high school.

The general election result will not only decide who will govern the country but also determines Israel's future direction vis-à-vis the Palestinians. CGTN hit the street to ask people about their opinions about two front runners for the new PM.

Although having no political experience at all, for a country where military service is highly regarded, people who support him trust the general can bring the country something new.

Amit Oren, a pilates instructor, said the country needs someone to bring something new and a lack of political experience will not hinder change.

Yuval Benjamin, a private detective, pointed out Netanyahu enter the job also with no experience and nobody enters the job with experience.

He believed Gantz's personality will enable him to act as a PM should act, and that Gantz will surround himself with ministers and political aids to help him.

People like Uri Paz, an IT engineer who supports Netanyahu argued the incumbent PM who won re-election for few times proves that the leader does very well in his terms.

"We have seen scenarios in the past where people are under investigation and it turned out to be nothing. Surely it can turn out this time again," he added.

The situation in Gaza is most interviewees' main concern for the country's future. Yuval Benjamin said the new PM should find some sort of diplomatic solution, some sort of an agreement something that normalizes the border.

He recalled the peace treaty between Israel and Egypt saying although it's a cold peace between the two side but it functions and holds.

While Gabay wanted the new PM to "take back South and hit Hama on the head."

From Paz's perspective, he hoped if re-elected, Bibi can be more fierce and adamant about dealing with what goes on in Gaza and antisemitism around the world.