WORLD Can US really stop being world’s cop?

Can US really stop being world’s cop?

"We are not the policeman of the world," US President Donald Trump said as he set out his vision for the use of US military during the commencement address at West Point on Saturday. 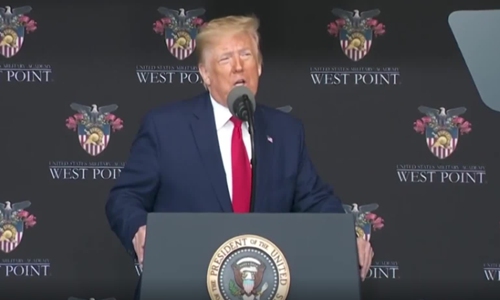 "The job of the American soldier is not to rebuild foreign nations, but defend, and defend strongly, our nation from foreign enemies. We are ending the era of endless wars," the president said.

This is not the first time Trump made the declaration that the US is no longer the world's policeman. During his trip to Iraq in December 2018, Trump defended his decision to withdraw troops from war-torn Syria by making the similar remarks.

Trump's bemoaning of the US' overseas commitment and the remarks that the country should stop being the world's cop are in line with his diplomatic philosophy that emphasizes "America First". At a time when his relations with senior military officials are strained and racial tensions are roiling the nation, Trump hopes to appease the US public, especially his supporters, by highlighting his attention on domestic issues. In this way he is emphasizing the role of the US military in protecting domestic security.

But can the US really stop playing policeman of the world? There is no sufficient evidence in history or now to indicate that the US is willing to, or could, stop policing the world. Instead, domestic issues have not prevented the US from interfering overseas.

This is inevitable and determined by the country's hegemonic nature. In order to maintain its hegemony, the US must expand its overseas influence. The US has also long regarded it a lofty mission to promote so-called democratic values and freedom worldwide.

Therefore, the US' role as the world's cop is a part, even a symbol, of US hegemony. As long as the US remains a hegemonic power or tries to sustain its power, its world police actions will not change. Can the US withdraw all its troops from overseas? Will the US give up its attempts to incite color revolutions in other countries？The answer is definitely "no." Therefore it's unlikely that the US will abandon its world's policeman status. Trump was just making empty talk at West Point.

As a matter of fact, what Trump said during the commencement address shouldn't be taken seriously. It is just a mere attempt to lower dissatisfaction within the military amid a widening rupture between Trump and troops.

In addition to claiming the US military is not the world's policeman, Trump spoke highly of contributions that soldiers have made to the country. He boasted of

his administration's achievements in the military field, such as establishing a Space Force and investing two trillion dollars for defense spending.

Since Trump took office, the US military has gradually been distancing itself from the president. Be it the conflicts between Trump and top US military officials including former secretary of defense Jim Mattis, or the controversy and differences over what role the US military should play in the ongoing riots in the US, it shows that Trump's perception of the US military's role is different from how the military perceives itself.

Trump, as the president and commander in chief of the military, believes the military should obey all of his orders. That's apparently not what some top military leaders think.

Trump's threats to use troops to quell domestic riots triggered by the death of George Floyd have made the conflicts between Trump and the military more obvious. There is now a deep rift between the two sides. This cannot be bridged by empty talks and sweet words.

The article was compiled by Global Times reporter Yu Jincui based on an interview with Zhang Tengjun, an assistant research fellow at the China Institute of International Studies.