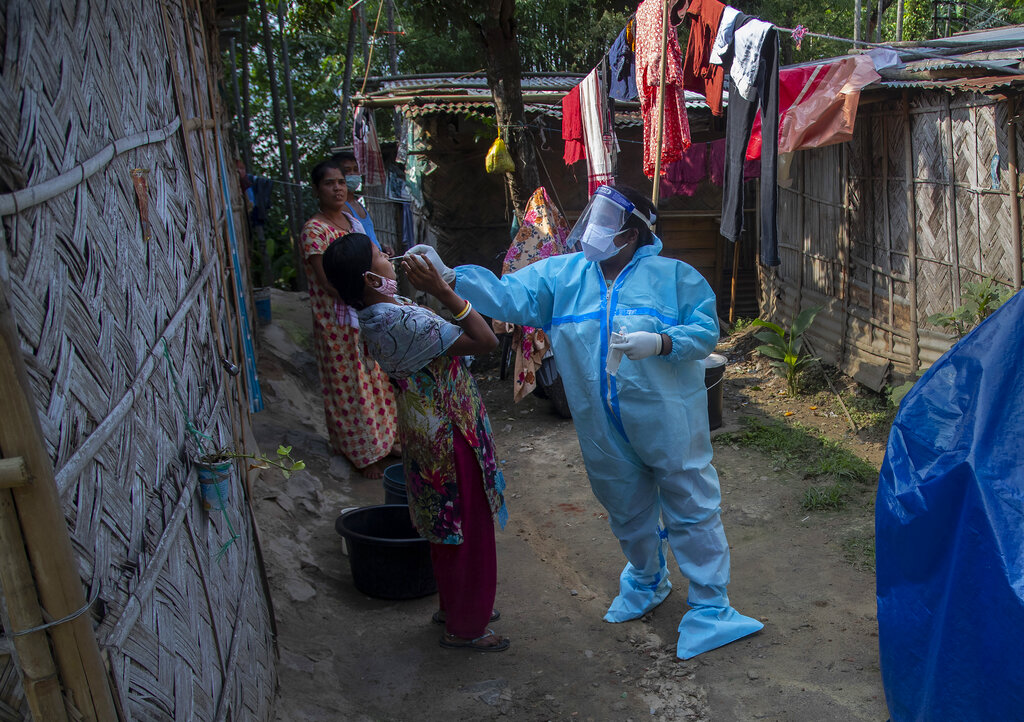 A heath worker in protective suit takes nasal swab sample of a woman to test for COVID-19 in Gauhati, India, Friday, May 21, 2021. (Photo: AP)

OTTAWA, May 21 (Xinhua) -- Canada announced on Friday to extend the restrictions against foreigners and flights from India and Pakistan into the country another month to June 21.

"Today, the Government of Canada is extending the temporary travel measures restricting entry into Canada by foreign nationals until June 21, 2021," said the Public Health Agency of Canada (PHAC) in a statement on Friday.

"To continue managing the elevated risk of imported COVID-19 cases into Canada, the Government of Canada has extended the Notice to Airmen (NOTAM) restricting all direct commercial and private passenger flights to Canada from India and Pakistan until June 21, 2021," PHAC said.

Canada also extends the requirement for air passengers who depart India or Pakistan to Canada, via an indirect route, to obtain a COVID-19 pre-departure test from a third country before continuing their journey to Canada and continues the mandatory pre-arrival, on-arrival, and post-arrival testing requirements; mandatory hotel stopover for air travellers; and mandatory 14-day quarantine for travellers.

"It has been decided based on public health advice that this is not the right time to loosen any border control measures," Canadian Transport Minister Omar Alghabra said at a press conference on Friday.

Canada's Deputy Chief Public Health Officer Howard Njoo said given the spread of the variants in Canada, infection prevention at the border is critical.

"What we're finding right now based on the latest data is that about less than one per cent of all travellers coming into Canada are testing positive for COVID-19 but if you look at the actual metrics, about half of those are actually the B.1.1.7 variant and now there's a growing percentage for the other variant of concern the B.1.617," Njoo added.

Canada has identified four variants of concern within the country's borders: the B.1.1.7 variant, which remains the most prevalent, followed by the P.1 variant, the B.1.351, and the B.1.617.

On Thursday, Canadian Prime Minister Justin Trudeau announced to extend the ban on non-essential travel across the Canada-U.S. border until June 21.