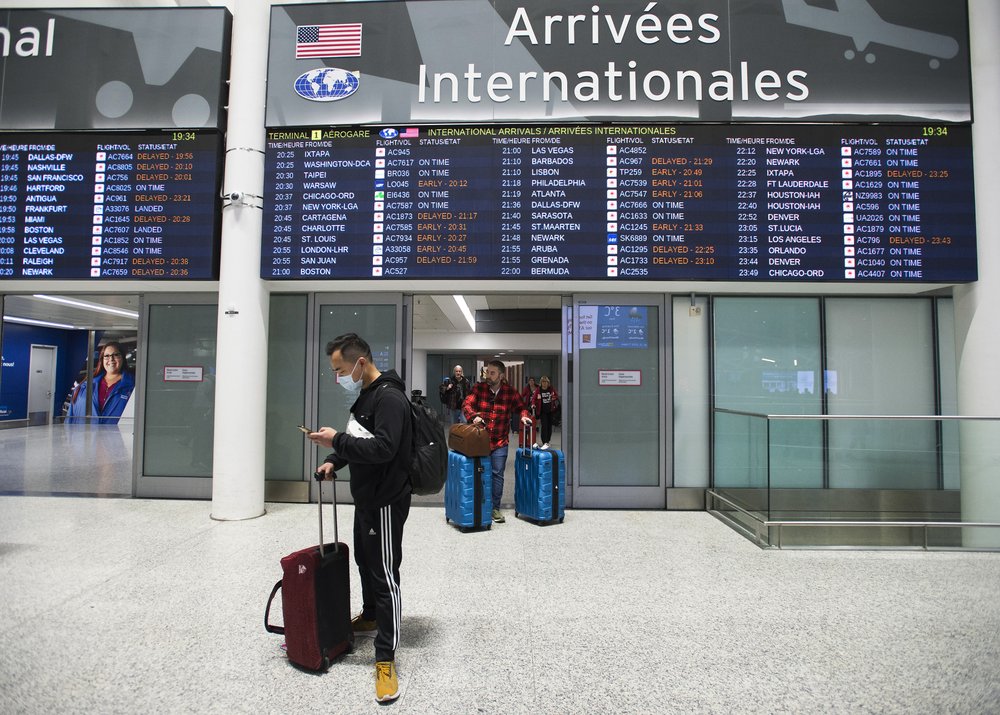 A man wears a masks following the outbreak of a new virus as people arrive from the International terminal at Toronto Pearson International Airport in Toronto on Saturday, Jan. 25, 2020. (Photo: AP)

“It will be a legal obligation for people entering Canada from outside Canada,” Freeland said. “Essential workers are excluded.”

More than a million Canadians and permanent residents returned to Canada between March 14 to March 20, according to Canada Border Services.

The mandatory quarantine will not apply to truck drivers and health care workers crossing the border. Canada relies on cross border trade for essential goods like food. Canada and the United States already closed the border for all non-essential travel.

Freeland said those who have already returned should be be self-isolating at home already. She said it is critical to protect the health of Canadians and ultimately to ensure that the country’s economic rebound comes more quickly.

“If we can flatten the curve then we can go back to normal life more quickly,” she said.

Health Minister Patty Hajdu said on Twitter that the government is making self isolating for returning Canadians and permanent residents mandatory to better protect Canada’s most vulnerable.

Prime Minister Justin Trudeau also announced his his government will offer $2,000 Canadian (US$1,395) a month, for the next 4 months, for workers who lose their income as a result of the pandemic.

Trudeau said Canada is facing a once in a generation challenge and noted a million Canadians applied for employment insurance in a week.

“Help is on the way,” Trudeau said.

The prime minister also said his government will also announce supports to keep journalists working amid the financial impact of the crisis.

“Right now, it’s more important than ever that Canadians have access to the latest news and information,” Trudeau said.

“To ensure that journalists can continue to do this vital work, our government is announcing new measures to support them.”

Trudeau made the remarks outside his residence, where he is self isolating after his wife tested positive for the virus. He says his wife is doing “much much better” and he and his kids have no symptoms.